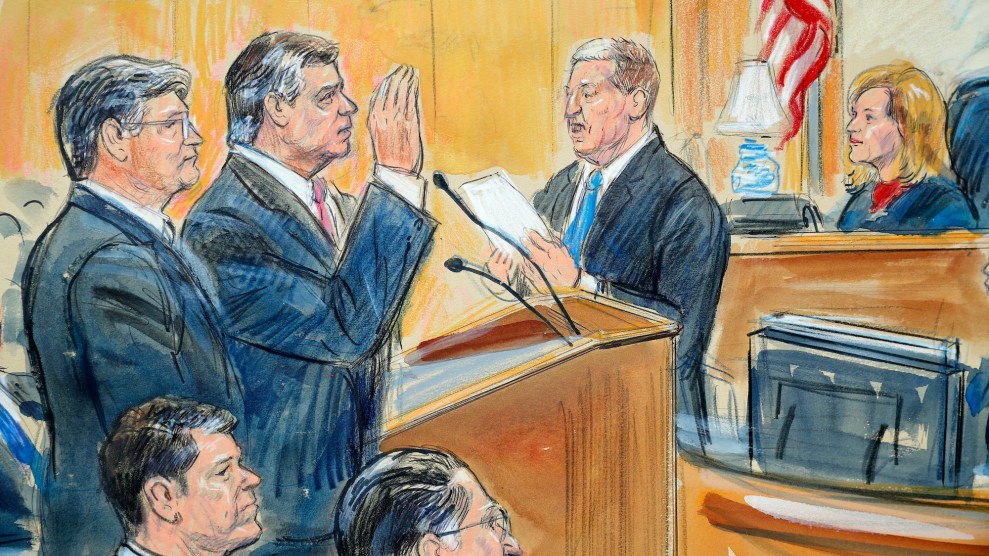 By the time Paul Manafort entered a packed courtroom on the second floor of the E. Barrett Prettyman US Courthouse in Washington at around 11 a.m. on Friday, everyone knew he was going to plead guilty and fess up to engaging in money laundering, undisclosed lobbying, and assorted other crimes. The question was whether the former Trump campaign chairman had flipped, offering to cooperate with special counsel Robert Mueller’s ongoing investigation.

President Donald Trump, who has described cooperating witnesses as rats, has praised Manafort for refusing to aid Mueller’s probe and openly dangled the prospect of a pardoning Manafort if he stood strong. Defendants often plead guilty to avoid the added expense of trial, without a separate deal to cooperate. Just last month, Manafort’s lawyer said there was “no chance” his client would assist Mueller. And reports on Thursday suggested Manafort agreed to a plea but may have drawn a line at cooperating against Trump.

He hadn’t. About 20 minutes into Friday’s hearing, after Judge Amy Berman Jackson led Manafort through standard questions about his guilty plea, Andrew Weissmann, the Mueller deputy heading Manafort’s prosecution, said he wanted to clarify an agreement on when prosecutors will drop charges remaining against Manafort from his trial last month in Virginia. “On page two of the cooperation agreement,” Weissmann said, “section three, last two lines, the agreement is, it would be at the time of sentencing or completion of successful cooperation, whichever is later.” Brief pause. Puzzled looks, then recognition. Manafort had flipped. “Bada bing bada boom,” as Manafort once wrote. Reporters, barred from using electronics in the courtroom, hustled to the door.

In a dark suit, with hair gone gray since he was jailed in June for witness tampering, Manafort looked subdued. But had he executed a literal flip in the courtroom, it would hardly have been more noteworthy. After holding out for 10 months, the last few in prison, Manafort had given in and agreed to divulge what he knows to Mueller and his team.

Of course, it is possible that Manafort lacks information implicating Trump in wrongdoing. And his cooperation could apply to different people or issues, such as other lobbyists and lawyers involved in Manafort’s illegal lobbying for Ukraine. But he is a big fish. Prosecutors most likely cut a deal with him only for help making a case against a bigger one. Mueller’s task is to investigate Russian interference in the 2016 election, including Trump campaign contacts with Russia. That is probably the topic on which Manafort is cooperating. Prosecutors also retain major leverage over Manafort. Convicted by a jury in Virginia last month on bank and tax fraud charges, Manafort must remain in jail until he is sentenced. And his sentencing, in which Mueller will have input, will come only after his cooperation is complete.

Do you understand, Judge Jackson asked Manafort as the hearing neared a close, that “you are agreeing to cooperate, wholly and truthfully, with the inquiry being conducted by the Office of Special Counsel?”

“I do,” Manafort responded.

The hearing ended after Manafort formally pleaded guilty. But reporters still wanted information. Would Manafort talk about Trump? Manafort’s lead attorney, Kevin Downing, refused to take questions following a brief statement outside the courthouse. Downing then strode north up the street, ignoring the cameras and the horde of reporters shouting questions. Richard Westling, another Manafort lawyer, trailed behind the media scrum around Downing. When Mother Jones asked if Manafort’s cooperation included Trump, Westling said he could not comment. But when another reporter approached, Westling shook his hand, smiling and noting the journalist knew his wife. That helped. When the reporter tried the same question—does Manafort’s cooperation cover Trump—Westling replied. The agreement, he said, requires “complete cooperation.”