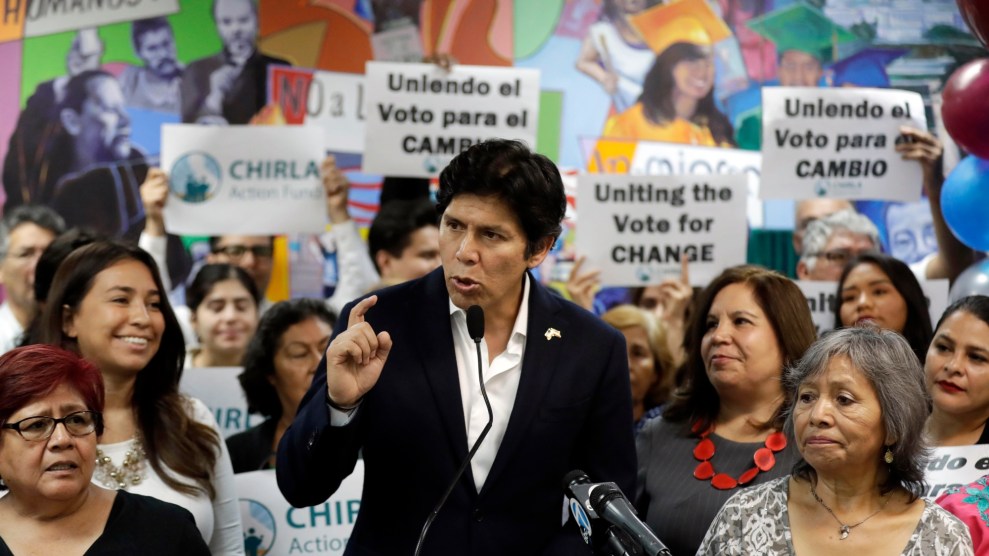 According to Kevin de León, if you want to see the future of politics, just look at California.

“We’re a restless, innovative, creative, disruptive state,” de León tells Mother Jones during a recent interview at a Starbucks, in between campaign meetings in San Francisco. “We just don’t push the envelope—we tear that envelope apart. We don’t stand in line with our heads down, kissing the ring and seeking permission.”

De León is the 51-year-old Democratic state senator who is challenging Sen. Dianne Feinstein (D-Calif.) for the US Senate seat she has held since 1992. In terms of her name recognition and war chest, he has an uphill battle. In a solidly blue state, Feinstein hasn’t faced a serious opponent in decades. But de León is banking on two factors to propel him to victory: the momentum that has emerged from California’s role as one of the leaders of the resistance during the Trump presidency, and the palpable frustration with Democrats, like Feinstein, whom some progressives see as complicit in maintaining the status quo.

De León projects a calm intensity; throughout our 40-minute conversation he rarely broke eye contact. He most recently served as the president pro tempore of the state Senate, although term limits are forcing him out of the Legislature. His passion for California is clear, and he attacks Feinstein for what he sees as her kowtowing to Senate Republicans and her apparent reluctance to challenge the Trump White House. He has nothing but contempt for Senate Democrats’ recent decision to allow the confirmation of 15 Trump nominees to the federal bench in exchange for a recess to campaign before the midterms.

“That shows the contrast of our values, of who we are,” he said. “We may be Democrats, but we are decisively very different individuals in the way we view the world, and how our views are shaped and the sense of urgency that we have inside.”

“We may be Democrats, but we are decisively very different individuals in the way we view the world, and how our views are shaped and the sense of urgency that we have inside.”

For the first time in Feinstein’s tenure in the Senate, her name will appear alongside another Democrat’s on the ballot in November. That’s because of California’s unusual “jungle primary” system, in which the top two vote-getters, regardless of party, advance to the general election. She first won the seat in 1992 during a special election and had to run again in 1994. Although she only won in 1994 by 2 points, her 2000 reelection bid set the standard of Feinstein consistently beating her Republican challengers by double digits. In 2012, she even got the record number of popular votes, 7.3 million, more than any other US Senate candidate in election history.

According to the most recent polling, Feinstein is leading by 9 points—down from the 16-point advantage reported in a different poll a few weeks earlier. However, whether the race is actually tightening or the result just reflects differences in polling is unclear.

Eric Schickler, a political science professor at the University of California-Berkeley, told Mother Jones that the de León campaign has suffered from the prevalence of other, closer races in the state. With Democrats fighting to unseat vulnerable Republicans in 10 highly competitive House districts, Schickler said a de León victory simply isn’t the party’s priority.

“A lot of people think that even if she’s not ideal, it’s not the fight to have right now,” he said. “Despite the concerns about her, Feinstein has managed to position herself enough toward the left on the key issues going on right now that [Democrats are] not making it their priority to defeat her.”

Although Feinstein still holds a comfortable lead, de León has attracted considerable support, including the state Democratic Party’s endorsement and the backing of most state Senate Democrats. Over his 8 years in the California Senate, he includes among his accomplishments the fact that he introduced the “sanctuary state” bill, wrote the law that mandates California be powered by 100 percent renewable energy by 2045, and supported Medicare-for-all.

Despite these strong progressive bonafides, a solid chunk of de León’s support comes from an unlikely source: Republicans. According to polling conducted from mid- to late-October, 34 percent of voters who identified as Republicans said they were de León supporters—equal to the number of Democrats who said they would vote for him. The greater likelihood is that a big chunk of the state’s 5 million GOP voters will sit this particular race out in the absence of a Republican alternative; 43 percent of Republicans polled said they wouldn’t vote in the Senate race. Among Democrats, Feinstein trounces the state senator.

“It is surprising and paradoxical,” Schickler said of Republican support for de León. “A lot of voters have very little info [about de León], but they know enough about Feinstein that they know she’s a Democrat and that they don’t like her. [After the Kavanaugh hearings], Feinstein became a symbol of ‘bad Democrats’ in a way she hadn’t been before.”

De León hasn’t received any institutional Republican support or endorsements, but there are some who see a de León win as a necessary sacrifice to “punish” Feinstein, particularly for her central role in the September hearing on sexual assault allegations made against now-Supreme Court Justice Brett Kavanaugh. Last month, conservative columnist Ben Boychuk made the Republican case for voting for de León in the Sacramento Bee, writing, “For a Republican or an undecided independent who was appalled by the entire Kavanaugh spectacle, a vote for de León isn’t a vote for socialized medicine, amnesty for undocumented foreigners, gun control, or higher taxes. It’s a vote to punish Feinstein. Period.”

When asked about his Republican support, de León laughed, calling it “very strange,” especially because he considers himself to be far more progressive than Feinstein, describing her as a Democrat who is as close “as you can get to” being a Republican.

Kevin de León was born Kevin Leon in Los Angeles in 1966 to a single mother who immigrated from Guatemala. He didn’t really know his father, also from Guatemala, who was of at least partial Chinese descent, according to the Bee. As a young adult, Leon added the “de” to his name, though not legally, in an effort to feel closer to the father he barely knew. He dropped out of the University of California-Santa Barbara and started his career doing political organizing for immigrants’ rights. Eventually he earned a bachelor’s degree at Pitzer College, one of the highly selective Claremont Colleges, and was first elected to the state Assembly in 2006 before becoming a state senator in 2010.

When he campaigns—lively events notable for their heavy Latino presence—de León describes not having health insurance when he was growing up, and credits his single mother and immigrant upbringing for bestowing upon him the “sense of urgency” he thinks Washington so desperately needs.

“For quite a few people, that urgency’s not there,” he said. “They haven’t suffered things, they haven’t endured things. I don’t criticize the senior senator’s upbringing or privilege, but what I do is make the contrast with that sense of urgency.”

“For quite a few people, that urgency’s not there. They haven’t suffered things, they haven’t endured things.”

According to GovTrack, which ranks Congress members by ideology, Feinstein was the 15th-most liberal member of the Senate in the 2017 legislative session, outranking other senators popular among the progressive wing of the Democratic Party like Elizabeth Warren of Massachusetts and Cory Booker of New Jersey, though she did lag behind fellow Californian Kamala Harris. A progressive outsider beating a well-known incumbent in a primary upset has been a theme this election season—Alexandria Ocasio-Cortez in New York’s 14th District and Andrew Gillum in the Florida gubernatorial race are examples—but their personal narratives are probably the greatest difference between the Feinstein and de León.

In mid-October, Feinstein and de León met in downtown San Francisco for their first and only debate. Feinstein had not debated a challenger in person in nearly two decades. Billed as a “conversation” between the candidates hosted by the Public Policy Institute of California, the event was notable not by any arguments over policy, but by how much they agreed.

They both support an assault weapons ban, protections for Dreamers (which refers to those who are in the United States under the Deferred Action for Childhood Arrivals policy), and a move toward clean energy. They both will vote no on California’s contentious gas tax ballot initiative, which if approved would repeal an increased tax on gas to fund improvements to the state’s crumbling infrastructure. They both stressed the importance of Congress coming together to pass comprehensive immigration reform and the need for gun control. Although de León has criticized Feinstein for her role in the Kavanaugh hearings, he didn’t bring it up during the event, instead focusing on the contrast between their styles of governance. He painted himself as a disruptor who will stand up to Trump and his opponent as an out-of-touch protector of the status quo who prefers to play it safe.

“On November 8, I made a decision that I would help lead the resistance,” de León said. “We have to export California values to Washington, not the other way around.”