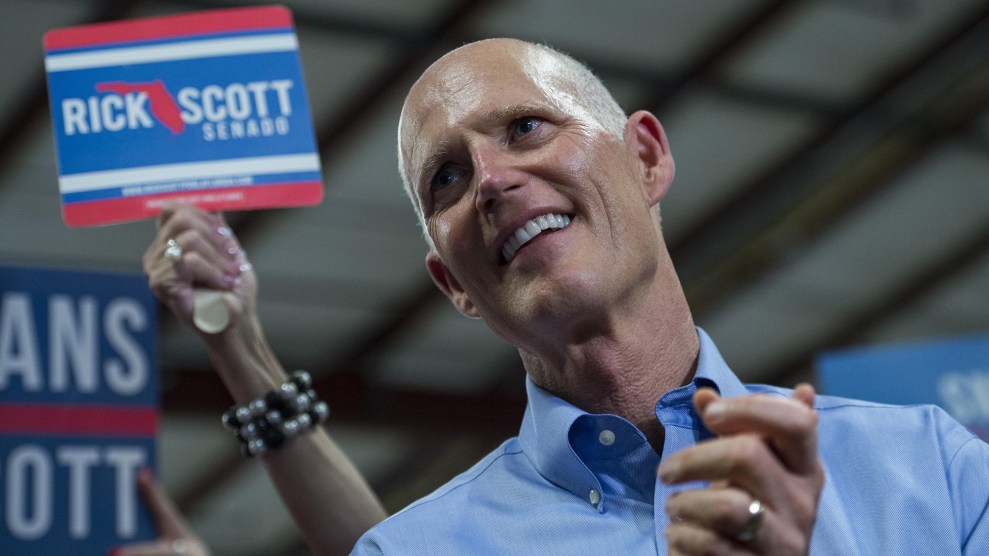 The final results of the Florida Senate race were finally announced Sunday afternoon, revealing Republican Rick Scott ahead of Democratic incumbent Bill Nelson by 10,033 votes, out of nearly 8.2 million cast—that’s a margin of just .12 percent. The Florida secretary of state is expected to certify the results on Tuesday.

Nelson released a concession video on Twitter just after 3pm on Sunday, in which he called on Floridians to continue to fight to preserve health care, the environment, the social safety net, and to oppose attacks on voting rights and other civil rights.

Well, things turned out a little differently than we had hoped, but I by no means feel defeated. That’s because I’ve had the privilege of serving the people of Florida for most of my life. It’s been a rewarding journey and a very humbling experience. No one could be more blessed. pic.twitter.com/aGIf5nFcyZ

The recount drew nasty political tactics from Republicans—including Scott and President Donald Trump and Sen. Marco Rubio—suggesting that Democratic activists, lawyers, and elections officials were committing fraud as Scott’s lead shrank. Broward County’s longtime supervisor of elections, Brenda Snipes, became a target for Republican leaders and protesters who rallied outside her office for more than a week.

Though Nelson gained more than 2,500 votes over the course of the recount, along with the addition of military and overseas ballots to the official count, it was not enough to make up his deficit to the state’s outgoing governor. But the slim margin has stoked Democrats’ fears that they let a winnable race slip through their fingers by making a few critical errors.

First, the ballot design in Broward County may have contributed to the fact that as many as 30,000 voters in that Democratic county cast fewer votes in the Senate race than in the other races: the Senate race appeared underneath the instructions in the bottom left corner of the ballot, where voters may have easily skipped over it. The Election Assistance Commission, a federal agency created in the wake of the 2000 recount in Florida to improve election administration, urges against placing races next to instructions.

But there were other issues that could have tipped the election to Scott. In south Florida, particularly Broward County, slow mail-delivery may have stymied many Democratic voters attempting to vote by mail, after ballots were delayed in reaching them, and then in making their way back to the county elections office. The Democratic Party in Florida made a big push to get people to vote by mail, but some local Democrats now lament the fact that their apparatus didn’t do enough to educate voters about how to ensure that their ballots were counted.

“This should be a wakeup call for Florida Democrats,” a Democratic official in Florida, who asked to remain anonymous in order to speak frankly, told Mother Jones on Friday. “This election highlighted that our voters don’t understand the process.”

Scott’s campaign may have also benefited from the state’s restrictive election laws—including his own unwillingness to restore voting rights to more than a million disenfranchised former felons. Florida’s election laws easily disqualify voters who don’t strictly follow instructions. A voter whose mail-in ballot does not arrive on Election Day is not counted. A provisional ballot cast in the wrong precinct is thrown out. Whereas many states have election day registration, Florida’s registration deadline is 29 days before an election. If election officials decide a voters’ signature doesn’t match what’s on record, their vote is not counted, and there is limited time to fix the issue. It’s still unclear how much these rules thwarted Democratic voters in the state, but the state’s party officials believe they are part of a voter-suppression scheme that likely played a role.

But Scott also ran a campaign that deftly softened his conservative edge on key issues. He entered the Senate race as one of the country’s most popular governors. The Republican generated substantial goodwill for his efforts to accommodate thousands of Puerto Ricans who fled to Florida in the aftermath of Hurricane Maria—as well as for the bipartisan package of gun reform legislation he signed into law in the wake of the February Parkland school shooting. Scott overcame a forceful rebuke from gun control activists—including some of the survivors of the Parkland and 2016 Pulse nightclub shootings—who said the governor’s efforts had been too little, too late.

Nelson had been among the five most vulnerable Senate Democrats seeking reelection in states Trump won in 2016. Some party operatives hoped the centrist Democrat would get a boost among minority and progressive voters from Andrew Gillum, the liberal Tallahassee mayor running for governor. But Gillum also came up short after a recount, losing to Republican Ron DeSantis.

Scott received an endorsement from Trump, who came down to Florida to stump for him and DeSantis in the final week of the campaign. Scott leaned on the president’s supporters to boost his candidacy, but he kept his distance from Trump on key issues, such the federal government’s response to Maria.

This post has been updated to include Bill Nelson’s concession video.