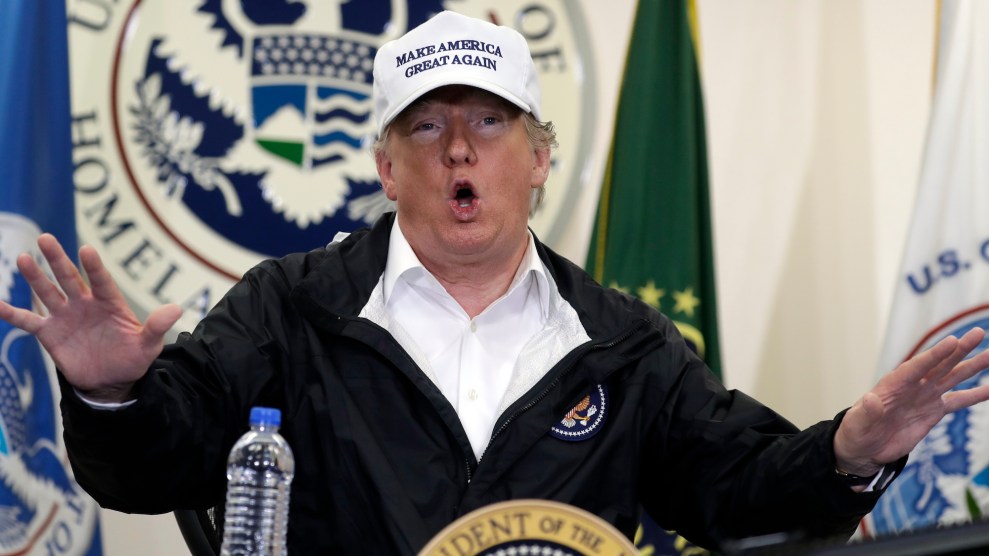 On January 4, speaking from the Rose Garden, President Donald Trump threatened to declare a state of emergency so he could use a “military version of eminent domain” to start seizing private land along the southern border to build a wall he says will keep out immigrants. Very few Republicans criticized Trump’s proposal to trample private property rights for a wall that most Americans don’t want, even though some have been critical of eminent domain in the past. In fact, Sen. Ted Cruz (R-Texas) ran ads against Trump during the 2016 presidential campaign saying that eminent domain is a “fancy term for politicians seizing private property to enrich the fat cats who bankroll them—like Trump.” But Cruz hasn’t said a peep about Trump’s plans for massive land seizures at the border, and has instead lauded the president for digging in against Democrats to push for a $5 billion congressional appropriation to build the wall—a fight that has led to the current government shutdown.

Ilya Somin, a law professor at George Mason University’s Scalia Law School and an adjunct scholar at the Cato Institute, a libertarian think tank, believes everyone should be concerned about Trump’s plan. After all, the people who are going to be the most affected by this part of Trump’s plan aren’t migrants, but American farmers and home and business owners. Barriers already separating the United States and the Mexican border have created major hassles for property owners on the border, some of whom have been cut off from the rest of their existing land and water sources inside the United States.

The border fence that has already been built since Congress authorized partial construction in 2006, covering nearly 700 miles in four states, is perforated with doors that the Border Patrol was forced to build to allow people to continue to access their property and to graze animals. Texas residents are already girding for a major legal fight over the 33 miles of border wall and fencing authorized by Congress in March, which require seizures of land owned by families in the Rio Grande Valley for generations—and a Catholic chapel dating back to 1865.

“Eminent domain, when it comes to jobs, roads, the public good, I think it’s a wonderful thing,” Trump said.

Eminent domain, the government’s power to seize private land, allows the government to “forcibly displace people, and they often destroy much more value than they create,” Somin says. “The wall is a good example of that. It would likely add little value and cause more harm than good.”

Trump is a big fan of eminent domain, which he took advantage of as a real estate developer. Notably, in the early 1990s, he convinced New Jersey’s Casino Reinvestment Development Authority to use eminent domain to condemn the house of a retired woman who lived next to Trump Plaza in Atlantic City. Trump wanted to turn her house into a limo parking lot. Vera Coking, who’d lived in the house for more than 30 years, had refused to sell to Trump. She fought back, sued, and kept her house. The lawsuit didn’t dampen Trump’s enthusiasm for government land seizures, though, especially those on behalf of private developers like him.

“Eminent domain, when it comes to jobs, roads, the public good, I think it’s a wonderful thing,” Trump told Fox News’ Bret Baier in 2015. “You’re not taking property…You’re paying a fortune for that property.” Trump suggested it was a “myth” that eminent domain forced people out of homes they didn’t want to sell, claiming that property owners want the money from the government, which he claimed would pay homeowners “four or five, six, 10 times” their property’s value.

Somin disagrees with Trump’s assessment. He says eminent domain of the sort Trump is proposing for the border wall does indeed force people out of their homes or businesses, “even if they want to stay.” And despite Trump’s earlier contention that people whose land gets seized make big bucks in return, Somin says in practice, “the money [the] government gives people in compensation is often grossly insufficient. The Supreme Court says you’re supposed to get fair market value, but in reality, people often don’t get that. And often fair market value doesn’t fully compensate people for their losses.” He points to the large butterfly sanctuary near the border that’s likely to be bulldozed to make way for the wall as an example of intrinsic value that is rarely covered by government payments to landowners.

Somin wrote a book about the 2005 Supreme Court case Kelo v. City of New London, the court’s last big case addressing the rights of property owners under threat of eminent domain land seizures. The decision in the case was highly controversial—a narrow 5-4 decision in which the liberals were in the majority—because it said that economic development was a “public use” for which the government could invoke its eminent domain powers. The court sided with a local government that created a private development corporation, which it empowered to seize private land. The corporation then gave the seized land to a private developer, who ended up not building anything at all. While the decision paved the way for expanded government land seizures through eminent domain—legally known as takings—it reaffirmed that the government had to compensate property owners at fair market rates. But Somin says that so far, the experience of land seizures for the parts of the border fencing already constructed has shown that that condition is rarely met. “The Department of Homeland Security has a really terrible record in procedural rights in earlier wall takings,” he says.

Indeed, last year, ProPublica and the Texas Tribune took a deep dive into land seizures done by the federal government in order to build 700 miles of fencing authorized in 2006 as part of legislation supported by, among others, Hillary Clinton and Barack Obama. The investigation found that the government had filed more than 360 eminent domain lawsuits against property owners taking their land, and in many of those cases, DHS “circumvented laws designed to help landowners receive fair compensation. The agency did not conduct formal appraisals of targeted parcels. Instead, it issued low-ball offers based on substandard estimates of property values.” Reporters found that the government bungled many of those cases, failing to take proper measurements or ascertain ownership of land before it was seized. At least one person had been paid for the seizure of land he didn’t even own, and others saw their property values wrecked in ways the government never accounted for when it paid them for land seized for border fencing.

Even if the government pays up, the border wall seizures can be a mess for landowners, who only discover after the fact that the fencing has depressed their remaining property values or created major obstacles. In one case described by ProPublica, the feds seized about 5 acres in Texas and built a fence across some farmland that left most of the farm and a house sandwiched inside the United States between the Rio Grande river and the fence, with an electronic gate that was supposed to allow the residents to get through to the other side. One year, the farmhouse burned down, and the owners believe it was because fire trucks were obstructed by the gate and couldn’t reach them in time. Four of their dogs and a goat died in the fire.

These land grabs were legitimate instances of the government seizing private property and infringing on people’s liberty, yet they never received as much attention as the Obama administration’s move in 2015 to conduct a military training exercise in Texas known as Jade Helm. Conservatives and tea party activists wigged out, egged on by Russian social-media bots suggesting that the exercise was really a secret plot by the administration to invade Texas, seize all the guns, and impose martial law on its residents. The outcry convinced Texas Gov. Greg Abbott to call out the state National Guard to monitor the military exercise just to make sure the Army wasn’t really marching on Austin.

Given that track record, why aren’t conservatives—especially Texas conservatives like Ted Cruz—freaking out more about Trump’s brazen plans to declare a national emergency and seize thousands of miles’ worth of private property?

Somin says in part the issue still hasn’t penetrated the public eye thanks to the “White House freak show” that’s overshadowing lots of important issues. Also, the issue is still somewhat theoretical. “As of yet, very few takings for Trump’s wall have happened, because he hasn’t been able to get the money he needs from Congress,” Somin explains. “Usually, controversial uses of eminent domain only start to attract a lot of public attention after significant [seizures] have already begun”—that is, when it’s too late to stop them. But he also notes that “some conservatives who might otherwise be hostile to eminent domain are willing to accept it here because of partisan loyalty, hostility to undocumented immigration—itself a major conservative cause—or some combination of the two.”