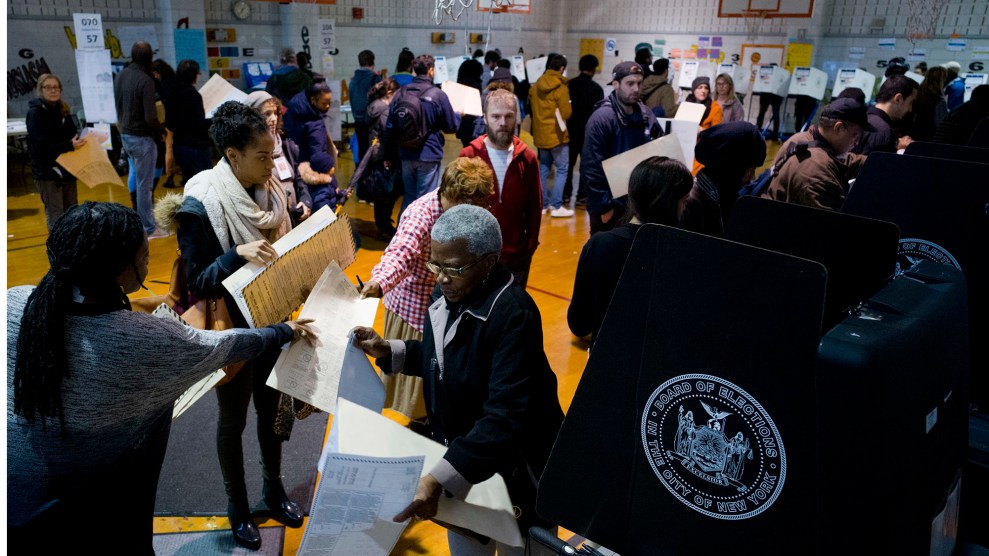 Despite its progressive reputation, New York has long had some of the most restrictive voting laws in the country. That will soon change. The Democratic-controlled state Legislature passed a sweeping election reform package on Monday that includes early voting and preregistration for 16- and 17-year-olds. It also gives initial authorization to constitutional amendments to enact Election Day registration and “no excuse” absentee voting, which must be approved by voters at a later date. Democratic Gov. Andrew Cuomo has pledged to sign the bills.

“It’s an incredible step forward for New York,” says Wendy Weiser, director of the democracy program at the Brennan Center for Justice. “These are long overdue reforms. New York has really lagged behind the rest of the country in modernizing its voting system, and we’ve seen the results at the ballot box.”

New York elections have been plagued by voting problems in recent years, and the state routinely ranks near the bottom of the country in voter turnout. (It was 42nd in 2018.) In November’s midterm elections, voting machines broke down across New York City, leading to lines as long as four hours. In statewide primaries two months earlier, there were widespread reports of registered voters not appearing on the voting rolls, including Dante DeBlasio, the 21-year-old son of New York City Mayor Bill DeBlasio. New York was the only state to hold separate primaries for state and federal elections—diminishing turnout by making it less convenient for voters to cast ballots in both—and voting in those primaries required registering with a political party nearly a year before the election. Two years earlier, in the April 2016 presidential primary between Hillary Clinton and Bernie Sanders, 120,000 people were wrongly purged from voting rolls in Brooklyn.

All of this has made New York a national laughingstock when it comes to voting rights, as Mother Jones has reported:

Both parties are to blame for the state’s antiquated voting system. Republicans controlled the state Senate until November, blocking numerous attempts at election reform, while Cuomo did not push aggressively to make it easier to vote. That changed in November, when Democrats took unified control of the state government and Cuomo made election reform a top priority. “The federal government is working to disenfranchise voters,” Cuomo said in a speech in December. “We have to do the exact opposite and improve our democracy. Let’s make a real statement about the importance of voting.”

We must and will reform New York's antiquated election laws.

The new law authorizes nine days of early voting, allows high school students to preregister so that they’re automatically permitted to vote when they turn 18, puts federal and state primaries on the same day, and caps the amount that limited liability companies—often shells for real estate interests—can give to political candidates. The legislation also gives initial authorization to Election Day registration and no-excuse absentee-voting. Those provisions must be passed as constitutional amendments, which require approval from two consecutive sessions of the Legislature and from the voters, who won’t have a chance to weigh in before 2021.

Weiser says the Legislature is also considering proposals this year to enact automatic voter registration and the restoration of voting rights to ex-offenders on parole, as well as one that would provide a 6-to-1 match on small donations to encourage state candidates to rely on public financing instead of large donors. “It’s been impossible to pass election reform in Albany for quite some time,” she says. “It’s a new day in New York.”

At a time when many Republican-controlled states are making it harder to vote, New York is part of a broader trend of states pushing back on GOP voting restrictions. Voters in eight states approved ballot initiatives in 2018 to make it easier to vote and harder to gerrymander. And the New York Legislature made election reform its first legislative priority, taking a cue from House Democrats, who introduced a sweeping democracy reform package as their first bill this month.