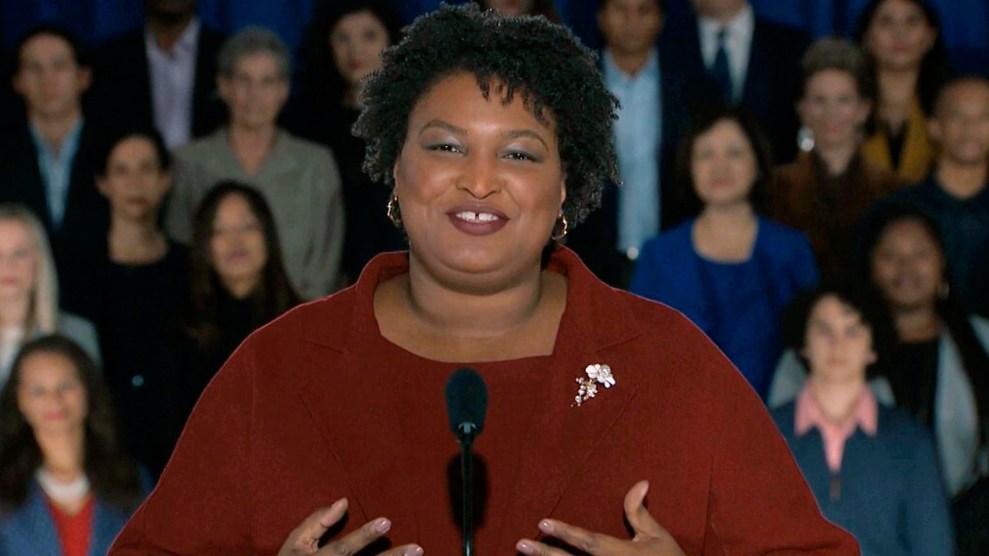 When I profiled Stacey Abrams for Mother Jones last year before she won the Democratic primary for governor, she seemed like Georgia’s best-kept secret. Now, in her home base of Atlanta on the eve of arguably the most important speech of her political career, one thing is clear: The secret’s out.

Months after narrowly losing Georgia’s governor’s seat to Republican Brian Kemp, Abrams was tapped to deliver the Democratic response to President Donald Trump’s State of the Union address Tuesday night, making her the first black woman to do so. Inside the official Abrams watch party at a downtown Atlanta bar called Noni’s, the mood was both festive and defiant. More than 100 people crammed onto sofas, chairs, and an outside patio with a flat screen TV behind the bar showing Trump and then Abrams make their appeals to the country.

Abrams, a former novelist who wrote a memoir that’s genuinely worth reading, introduced herself to a national audience in her signature personal style, with a story about her Mississippi childhood and what it means to know that you have people to fall back on in hard times.

That, she hinted, is not what’s happening in America right now:

So even as I am very disappointed by the president’s approach to our problems, I still don’t want him to fail. But we need him to tell the truth and to respect his duties and respect the extraordinary diversity that defines America. Our progress has always been found in the refuge, in the basic instinct of the American experiment, to do right by our people.

The crowd seemed an equal mix of young and old, white and people of color, with some Abrams supporters wearing T-shirts with messages like “Asians for Abrams” and “Millennials for Stacey Abrams”—a nod to the broad coalition of support she built in the state.

In fact, sitting in Noni’s on Tuesday night, it was hard to tell that Abrams had lost anything back in November, much less the top office in a rapidly changing state that Democrats contend is on the cusp of turning blue. Abrams posters lined the walls. But they weren’t campaign posters: Instead, they advertised Fair Fight, her new bipartisan voting rights nonprofit whose goal Abrams described in her speech as ensuring elections “where voters pick their leaders, not where politicians pick their voters.”

“Georgia is still in play, and all eyes are on the state,” said Chrystian Woods, deputy executive director of the Georgia Democratic Party.

Woods seemed particularly aware of that fact when the TV showed the sergeant-at-arms announcing that Trump was entering the chamber, and she directed the crowd’s attention to a corner of the room opposite the television. She urged people to pose with their Abrams signs in the air for a large group selfie. This was not a moment to focus on Trump, but rather, as Woods said, “our leader.”

Never mind that for the first time in more than a decade, Abrams is not currently in elected office. But for Democrats, in Georgia and nationally, Abrams’ loss seems only like a temporary setback. What she does next is the subject of intense national speculation—another run for governor is on the table, but so too is a challenge to Republican Sen. David Purdue. Some especially hopeful supporters are even calling for Abrams to jump into the crowded 2020 presidential primary.

But despite the hope floating around the room, with waiters decked out in “Fair Fight Georgia” T-shirts, there was still an unsettled feeling in parts of the room about the prospect of Abrams thinking beyond Georgia. Her gubernatorial platform rested on ambitious policy plans like expanding Medicaid and automatic voter registration. But under Gov. Kemp, a Trump favorite, people in the state are bracing themselves for a much tougher fight, especially as several lawsuits relating to the 2018 governor’s race are still making their way through the courts.

“Being in a defensive posture is not a fun way to organize,” said Mary Hooks, co-director of a grassroots organization called Southerners on New Ground. Hooks described a “different level of investment from Abrams,” one that activists hoped could still be leveraged to make radically transformative changes in the state, like freeing political prisoners and expanding the right to vote to people incarcerated in state prisons. The key may be to build on the infrastructure—volunteers, first-time voters, grassroots organizations—built by the Abrams team. The underlying fear, of course, is that Abrams herself—and the attention and resources she brings in—will grow beyond this state’s battles.

But on this night, seeing Abrams’ pitch on national television gave everyone a much-needed reason to celebrate and relax. People booed at the sight of Supreme Court Justice Brett Kavanaugh and braced themselves for Trump. But the feeling was that it was not about the night itself, but about the long fight ahead and the battle that, if the signs and energy in the room were any indication, they’ve already won.

And no matter where Abrams goes next, it seemed clear the people in this room will be proud. As Melva Steps, a Fair Fight Georgia volunteer who has supported Abrams since her time in the Georgia Statehouse, said, “She’s very authentic, and that was recognized across the nation, which is awesome, because that’s where she belongs.”

Want the tea on what’s happening at the official #AbramsAddress watch party? 👀