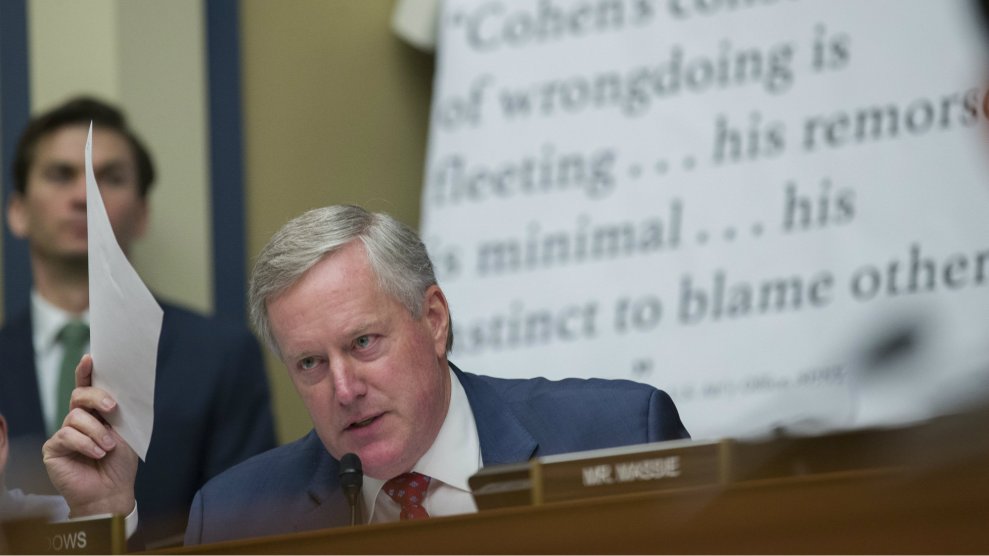 Update, 2:26 pm: Rep. Brenda Lawrence (D-Mich.) took issue with Rep. Meadows using Lynne Patton as proof that Trump isn’t racist. “To prop up one person from our entire race of black people and say that nullifies it is totally insulting,” she said.

Michael Cohen, the president’s former lawyer, is testifying before the House oversight committee today. In his leaked opening statement, Cohen—who has been sentenced to three years in prison for tax fraud and lying to Congress about Donald Trump’s real estate dealings in Moscow—accused Trump of being a liar, a con man, and a racist.

Trump began his political career by accusing the first black president of the United States of being born in Kenya. In 2015, he opened his presidential campaign by referring to Mexican immigrants as drug dealers and rapists. As president, he referred to Haiti, El Salvador, and African counties as “shithole countries.” He shut down the government over the refusal by Congress to allocate funds to build a wall on the Mexican border.

Today, Rep. Mark Meadows (R-N.C.) tried to disprove Cohen’s allegations of racism by using one of the few black officials in the Trump administration as a prop. Lynne Patton, who once planned events for the Trump family, is now a regional administrator at the Department of Housing and Urban Development, overseeing New York and New Jersey. Over the last two weeks, Patton has been residing in New York’s public housing because, as she told the Washington Post in November, it’s “not okay for me to preside over the largest housing crisis in the nation from the warmth and comfort of my own safe and sanitary apartment while NYCHA residents continue to suffer the most inhumane conditions.”

On Sunday, she announced that this week would be a “bye-week” and she would be moving out because of mandatory HUD meetings.

WEEK 3: Unfortunately, this week will have to be a “bye week” for me living in @NYCHA due to 3-days of mandatory meetings at @HUDgov in Washington DC. While my boyfriend & dog will appreciate my extra 2 days at home, I look forward to moving into #QueensbridgeHouses on 3/4/19. pic.twitter.com/sSnlB0dPKo

She also used her time in Washington, DC, to appear at Cohen’s testimony.

“I asked Lynne to come today in her personal capacity,” Meadows told Cohen, who was responsible for bringing Patton into the Trump organization. “You made some very demeaning comments about the president that Ms. Patton doesn’t agree with,” he said as Patton stood quietly behind him. “She says that as a daughter of a man born in Birmingham, Alabama, that there is no way she would work for an individual who was racist,” Meadows concluded, disregarding the fact that many black people have worked for racist employers.

“How do you reconcile that?” Meadows asked Cohen. (Trotting out a black person to prove someone isn’t racist is an old trope commonly referred to as the “I have a black friend” defense.) The congressman insisted that the president could not be a racist because he had never witnessed it. “I’ve talked to the president over 300 times,” Meadows said. “I have not heard one time a racist comment out of his mouth.”

Cohen hesitated in his response, but mentioned that he’s the son of a Holocaust survivor and acknowledged that he did not have any recordings of Trump being racist.