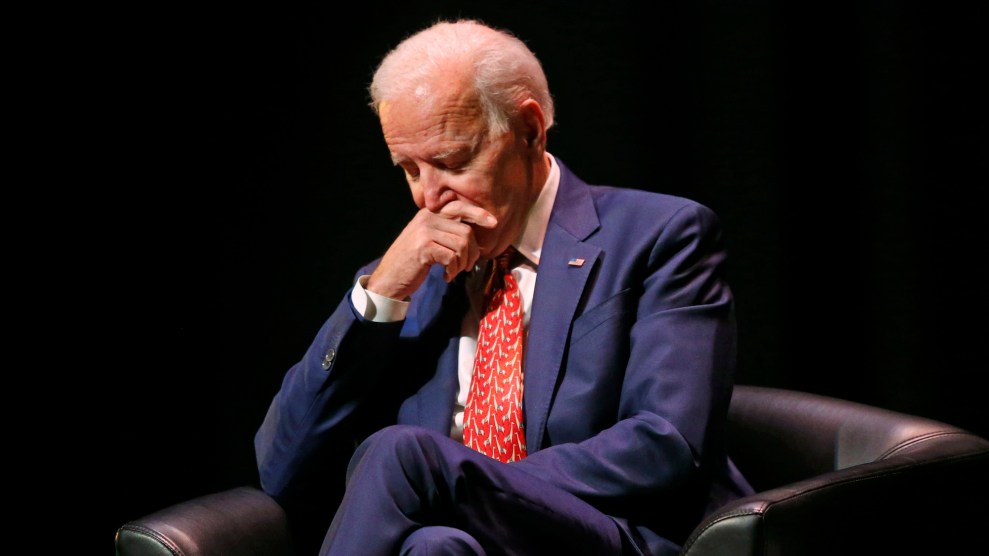 Former Vice President Joe Biden is responding to allegations that he made a Nevada politician feel “uneasy, gross, and confused” by touching her shoulders, smelling her hair, and kissing her on the back of the head in 2014.

That statement does not include an apology for his behavior.

“In my many years on the campaign trail and in public life, I have offered countless handshakes, hugs, expressions of affection, support and comfort,” Biden said in the statement released on Sunday morning. “And not once—never—did I believe I acted inappropriately. If it is suggested I did so, I will listen respectfully. But it was never my intention.”

NEW: Statement from Joe Biden saying in all his years in public life, taking photos and giving hugs, “not once – never – did I believe I acted inappropriately. If it is suggested I did so, I will listen respectfully. But it was never my intention.” pic.twitter.com/P0OuFeWDXu

In an essay published by The Cut on Friday, Lucy Flores, the former Democratic nominee for lieutenant governor of Nevada, wrote that Biden approached her from behind before a 2014 campaign rally, touching her shoulders and smelling her hair. He then “proceeded to plant a big slow kiss on the back of my head,” according to Flores. She wrote that the experience made her feel confused and powerless:

By then, as a young Latina in politics, I had gotten used to feeling like an outsider in rooms dominated by white men. But I had never experienced anything so blatantly inappropriate and unnerving before. Biden was the second-most powerful man in the country and, arguably, one of the most powerful men in the world. He was there to promote me as the right person for the lieutenant governor job. Instead, he made me feel uneasy, gross, and confused. The vice-president of the United States of America had just touched me in an intimate way reserved for close friends, family, or romantic partners—and I felt powerless to do anything about it.

Bill Russo, a spokesman for Biden, said in a statement on Saturday, “Neither then, nor in the years since, did he or the staff with him at the time have an inkling that Ms. Flores had been at any time uncomfortable, nor do they recall what she describes.” Russo added, “But Vice President Biden believes that Ms. Flores has every right to share her own recollection and reflections, and that it is a change for better in our society that she has the opportunity to do so.”

Biden similarly expressed a carefully-worded respect for the #MeToo movement. “I may not recall these moments the same way, and I may be surprised at what I hear,” he said in his statement on Sunday. “But we have arrived at an important time when women feel they can and should relate their experiences, and men should pay attention. And I will.”

The former vice president is deciding whether to run for president in 2020 and his potential opponents have already weighed in. Sen. Elizabeth Warren (D-Mass.) said on Saturday that she believes Flores. Sen. Bernie Sanders (I-Vt.) said on Sunday that he “had no reason not to believe” Flores.

Biden has a long history of inappropriate displays of affection toward women caught on-camera. “I saw obvious discomfort in the women’s faces, and Biden, I’m sure, never thought twice about how it made them feel,” Flores wrote of those instances. “I knew I couldn’t say anything publicly about what those pictures surfaced for me; my anger and my resentment grew.”