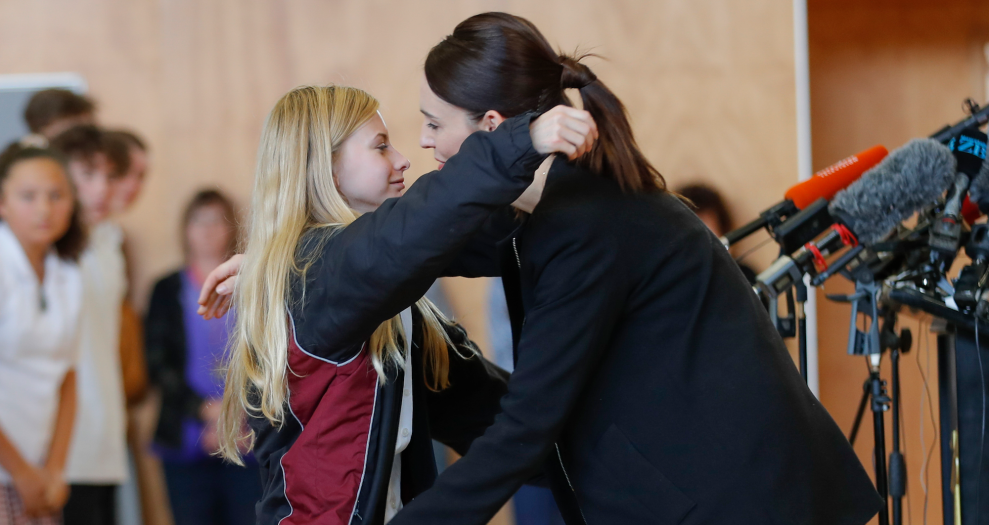 New Zealand Prime Minister Jacinda Ardern returned to Christchurch on Wednesday to speak to students at Cashmere High School—where a 14-year-old and 15-year-old were among those killed in Friday’s mosque shooting—to call on young people to help build an environment in which racism is not tolerated and people of all backgrounds feel safe.

“Feeling safe means feeling safe from violence,” Ardern told students. “There are lots of things that government can do to make sure people are free from violence, and we will do those things. But it also means making a place where there is no environment for violence to flourish, where we don’t let racism exist, because racism breeds extremism.”

In order to achieve some of that, Ardern specifically warned students of the dangers of social media sites becoming platforms for hate. “Now there are things that we need to do to confront that—I want you to know we’re going to try and do that, and we’ll probably try and do that alongside some of our international friends,” she told students. “But in the meantime, we need you to help us guard against that too.”

The prime minister’s exhortations against online hate come amid her calls for Silicon Valley to take a stronger role in combatting extremism in the wake of the Christchurch massacre. The gunman live-streamed his attack, and the resulting video was aired across Facebook, YouTube, and Twitter. On Tuesday, amid criticism that social media companies were too slow to act, Facebook admitted that the video had been viewed more than 4,000 times before it was eventually removed from the platform.

“We cannot simply sit back and accept that these platforms just exist and that what is said on them is not the responsibility of the place where they are published,” Ardern said Tuesday in her first speech before Parliament since the shooting.

“It cannot be a case of all profit, no responsibility,” she continued.

On Wednesday, when asked if she would welcome Facebook CEO Mark Zuckerberg’s to New Zealand, Ardern brushed off the suggestion and said that she was “not interested in a PR exercise.”

As Ardern spoke to students, families in Christchurch were beginning to bury the dead. Powerful memorials and displays of solidarity have continued throughout the country as people prepare to mark the one-week anniversary on Friday.

I’m not ashamed to admit I wept at this scene tonight — Christchurch locals forming a human chain behind Muslims as they perform maghrib prayers in front of the Al Noor mosque, where so many died. It was utterly beautiful pic.twitter.com/6CjKAi4ir6

Listen to reporters Ali Breland, Mark Follman, and Pema Levy describe the ways in which giant tech companies have proven themselves unable or unwilling to stop the spread of hate speech on their platforms, and became unwitting allies of the Christchurch shooter, on this week’s episode of the Mother Jones Podcast.