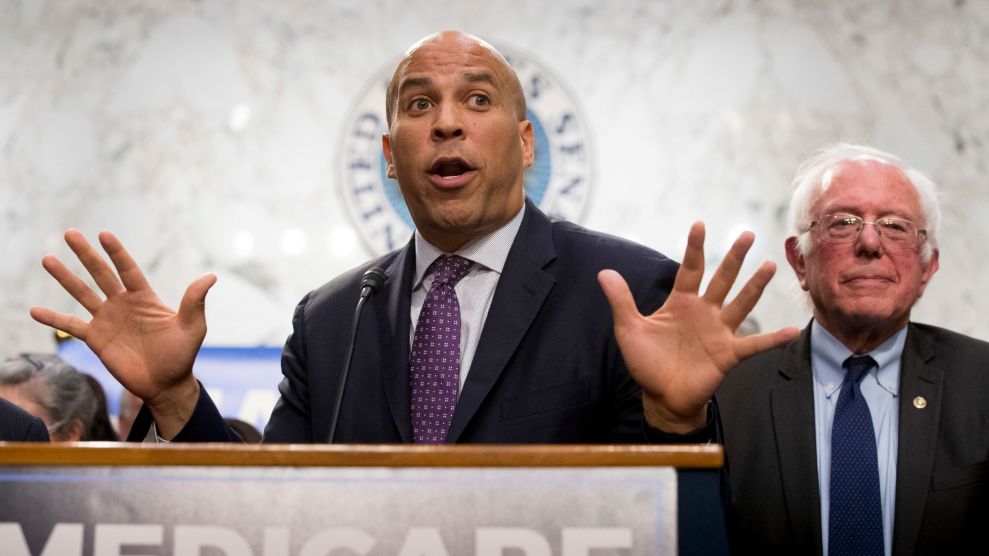 Cory Booker speaks at a 2017 news conference in supporter of Bernie Sanders' Medicare for All bill.Andrew Harnik/AP

The lead author of the House of Representatives’ Medicare for All bill has been reaching out to Democratic presidential campaigns in an effort to remedy what she views as misrepresentations of the legislation by some of the candidates. Rep. Pramila Jayapal (D-Wash.) tells Mother Jones that while she’s thrilled to see so many serious White House hopefuls talking about the idea, she’s worried that, too often, they’ve failed to accurately explain what it would mean for voters. So she’s asked to brief the candidates and their staffs on the details.

“We want to make sure we bring the best information that’s out there to the presidential candidates, so they know how to talk about this,” says Jayapal, an influential liberal who co-chairs the 95-member Congressional Progressive Caucus. “They should be accurate about it.”

In Congress, the term “Medicare for All” has a precise definition. It refers to legislation—introduced by Jayapal in the House and Bernie Sanders in the Senate—that would do away with employer-sponsored insurance and implement a single-payer health insurance system run by the federal government. But among the Democratic contenders who have cosponsored the Medicare for All bills in Congress, the definition has seemed far more elastic, with candidates equivocating on the proposals’ most controversial features.

“The more candidates you get, the harder it gets, because the message is sort of all over the place.”

Jayapal wouldn’t say which candidates she had reached out to—though she did note that she offered a briefing to her home state governor, Jay Inslee, who is running for president. (Inslee has not supported Medicare for All; in May, he signed a state law allowing Washington residents to join a government-sponsored insurance plan, also known as a public option.)

Jayapal also declined to identify specific statements that concerned her, but it isn’t hard to find examples of Medicare for All supporters whose rhetoric doesn’t always match the text of the legislation.

Sen. Kamala Harris (D-Calif.) has cosponsored Sanders’ Medicare for All bill and has vocally supported it on the campaign trail. But during an MSNBC town hall last month, she told the audience that “the odds on favorite is you will be able to keep your doctor” under Medicare for All because “91 percent of the doctors in the United States are in the Medicare system.” While Harris’ statement accurately reflects the proportion of doctors who now accept Medicare, it wrongly implies that consumers would simply be enrolled in the existing Medicare system. In fact, both bills would replace the current Medicare structure with a more comprehensive one. Backers of the legislation argue that this will result in an even higher number of physicians participating in the program.

Harris has also been inconsistent in describing whether Americans would be able to keep their private insurance under Medicare for All. When CNN’s Jake Tapper asked the California senator if she intended to eliminate private coverage—as Sanders’ plan largely would—she seemed to say she would. But when Tapper followed up with her at another town hall last month, Harris said her words had been misinterpreted. According to Harris, she was simply saying that she wanted to cut down on the bureaucracy of the current insurance system, not ban private insurance altogether, and she argued that Sanders’ bill wouldn’t actually eliminate private plans. As NBC’s Benjy Sarlin pointed out, Harris is technically correct—consumers would still be able to purchase certain supplemental plans—but her words might have left voters with the false impression that they would be able to keep their employer-provided insurance.

Other candidates, meanwhile, have backpedaled on their support of the proposal. Last month, Sen. Cory Booker, another cosponsor of the Sanders bill, told CNN that he supports Medicare for All. But, he said, he’s a “pragmatist” who would want to permit people to keep their private insurance plans. “I’m telling you right now, we’re not going to pull health insurance from 150 million Americans who have private insurance, who like their insurance—my union friends, brothers, and sisters, who have negotiated for their health insurance,” he said. “It’s going to have to be a pathway to getting there that’s going to start with the common-sense things that can unite Americans.”

In a CNN appearance Sunday, Sanders clarified the status of private insurance in a Medicare for All system. Under his bill, he noted, there would be a “limited” role for private insurers to provide supplemental coverage for certain procedures —“often cosmetic”—that aren’t covered by his proposed government plan.

Jayapal argues that the mixed messages stem from a failure by single-payer advocates to fully explain their proposals, rather than from any political pitfalls in the legislation. “I think most of the other presidential candidates haven’t had that depth and exposure [that Sanders has had],” Jayapal explains. “Sometimes I think we have some missed opportunities to [explain] what’s in the bill and the way to talk about it.”

But for individual candidates, the muddled rhetoric may also be politically expedient. While polls have consistently found that a majority of voters supports the concept of Medicare for All, that support falls when the plan is described as a “single payer” system or when respondents are informed that it would eliminate private insurance. What’s more, a January poll from the Kaiser Family Foundation found that 55 percent of those surveyed who now have employer-provided insurance wrongly believed that Medicare for All would allow them to choose between a public option and their current health plan.

The public confusion runs counter to what Jayapal and her allies had in mind when she introduced her bill in late February. Facing an uphill battle with members of her own party in the House—let alone in the GOP-controlled Senate and White House—she knew there was no chance that Medicare for All would become law before the next election. Instead, the bill was intended to create a benchmark for what qualifies as a progressive health plan among the White House hopefuls—or, in Jayapal’s words—a “base level of policy that candidates have to speak to.” With big-name presidential candidates on board, progressives hoped to use the legislation as an organizing tool, something that would show voters what Democrats would do if they win the Senate and the presidency next year.

“I think it will be iterative as we go, but I think that is the direction it’s flowing right now, and it’s exciting to see,” Jayapal told me in April. “Now, the more candidates you get, the harder it gets, because the message is sort of all over the place.”

Even as the message is all over the place on the campaign trail, momentum for Jayapal’s bill has been building among her House colleagues in recent weeks. Late last month, three high-profile House Democrats threw their support behind the plan: Longtime Reps. Lloyd Doggett (Tex.) and David Price (N.C.), as well as House Budget Committee chairman John Yarmuth (Ky.), who brought the number of committee chairs backing the bill to 14. Last week, Assistant House Speaker Ben Ray Luján (D-N.M.) became the highest-ranking member of House leadership to sign onto the bill—a particularly noteworthy development given that Lujan is facing a potentially competitive bid for Senate next year. A majority of House Democrats have now signed on to Jayapal’s bill. On Wednesday, the House Ways and Means Committee will hold a hearing on the measure, the third Medicare for All hearing on Capitol Hill this year.

“Inside Congress, I feel very good about where we’ve been,” Jayapal says. “I’ve been an organizer for a long time. You work these steps. Each step gives a foothold for people who might not have had a foothold yet.”

Eagan Kemp, a health care policy associate at the progressive group Public Citizen, hopes that the upcoming Democratic debates—the first of which is scheduled for June 26—will help clarify presidential candidates’ views.

“In the House, there’s more consistency and unity as we get down into the details of health policy, and I think that serves Medicare for All well,” Kemp says. “That’s the challenge in the 2020 race: The further you are from the specifics of Medicare for All, the harder it is to have a coherent discussion.”