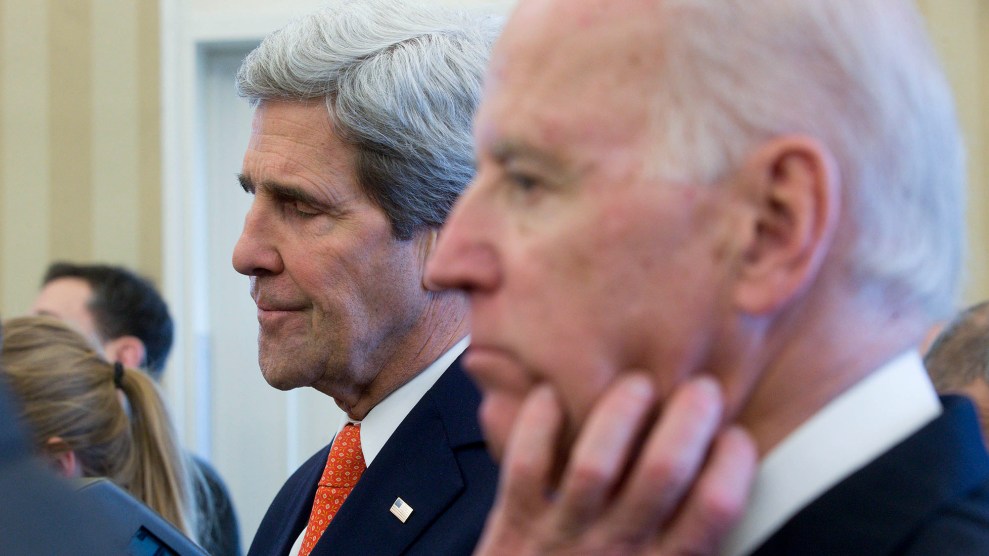 John Kerry and Joe Biden in the Oval Office in 2014.Andrew Harrer/picture-alliance/dpa/AP

The watchword of the 2020 Democratic primary so far is “electability.” As a Hill column recently put it, “Democrats have 23 candidates but just one issue: electability.” Boiled down, that means Democratic voters are likely to choose among the candidate who they believe has the best chance of smiting Donald Trump in 17 months—as opposed to embracing the aspirant whose positions or qualifications they most identify with or fancy. Of course, for some voters, these two circles overlap on the Venn diagram of White House contenders, though one voter’s idea of an electable candidate might be another’s dead-ender. But within the main currents of political punditry, there does seem to be something approaching a consensus view: Joe Biden is the candidate of electability. Yet anointing President Barack Obama’s veep as Mr. Electable may be more an act of taste than one of analysis. That is, the case can be argued either way.

Does a fixation on “electability” even produce the best result?

The Biden-as-best-bet notion is not entirely specious. There are plenty of reasons to think—or guess—he could be the most competitive Trump foe in the general election. His liberal centrism coupled with his claim (perhaps naive or misguided) that he can restore bipartisanship to an embattled Washington could attract moderate, in-between voters. His hard-scrabble Scranton roots—did you hear he grew up in Pennsylvania?—could yield one-of-us appeal in the once-Democratic states of Pennsylvania, Michigan, and Wisconsin, which in 2016 flipped the electoral map in Trump’s favor. His association with Obama could motivate those Democratic and middle-of-the-road voters who miss the cool and calm president and yearn for a return to norms and normalcy. His polished debating skills and take-no-guff manner could position him well in the official debates and daily tweet-tussles with Trump. And, yes, some political observers in private say that being a white guy could give Biden a chance to cut into part of Trump’s electorate.

Notice that the sentences in the above paragraph relied heavily on the word “could.” Because all of this is possible—or not. For instance, the two biggest vote-getters in Democratic history (in raw number of votes) were a black man and a white woman—not a white male politician. And there are reasons that might cause one to conclude that Biden in particular is not the most electable general-election candidate in this crowded field. He has long been a supporter of trade policies—NAFTA, the Trans-Pacific Partnership—that Trump effectively used as ammo against the Democrats in those critical swing states.

In 2016, an essential component of Trump’s strategy was to demotivate potential Hillary Clinton voters by emphasizing her past actions that offended progressives and African Americans. The Trump campaign could do the same with Biden by weaponizing his support of the 1994 crime bill, his long-ago stance against busing, his vote for the Iraq war, his handling of the Anita Hill hearings, his support of the controversial Hyde Amendment (which prohibits Medicaid from covering abortions), and his embrace of Big Finance. And there is the question of his inappropriate touching of women—a matter that so far has not impeded his campaign.

Biden certainly does have progressive credentials (enacting the Violence Against Women Act, pushing Obama to back marriage equality, championing the Affordable Care Act, advocating nuclear arms treaties, helping to pass middle-class tax cuts), but he carries plenty of baggage for Trump’s campaign—and any sub rosa pro-Trump social media effort—to kick. Biden is also susceptible to the same overarching charge Trump hurled at Clinton: He’s been in Washington for decades—almost half a century—and that makes him part of the problem. Plus, he is pretty darn old. He will be three weeks shy of 78 on Election Day in 2020. A couple of senior moments, a falter here or there—and his age could become a dominant issue.

So take your pick: Biden is by far the most electable of the Democratic wannabes, or he doesn’t have a chance. But does a fixation on “electability” even produce the best result? Recent presidents were not considered the most electable during their primary contest. Trump? No way. Obama? Well, that was hard to imagine. George W. Bush was the GOP establishment’s favorite in 2000, though many political experts argued Sen. John McCain, with his maverick appeal to independents and Democrats, was the better candidate for the main event.

Meanwhile, candidates who have been touted by their party’s establishment and media commentators for their presumed electability during their nomination contests did not thrive in the general election: Mitt Romney, Hillary Clinton, and John Kerry. They all had to fend off primary challengers who generated more excitement among the activists of their respective parties. In response, the Romney and Kerry camps each argued at the time (2012 and 2004, respectively) that those other candidates were fun to date but that their man was the best for primary voters to marry, for he would be a good provider in the fall. The message: Vote your head, not your heart.

Romney and Kerry surely were safe and perhaps a tad boring. Clinton, though she was aiming to score a historic first, also was criticized in both of her presidential primary runs for tending to be overly cautious. Trump and Obama, though, excited their party’s base, and each rode a train of daring into the general election. And in 2004, the Bush campaign did all it could to whip up the evangelical vote. Is the lesson that a candidate who rallies his or her party’s faithful has a better shot? Playing it down the middle has not always worked out. Clinton, who did not energize key elements of her own party, did indeed collect more votes than Trump—who got important assists from Moscow and then-FBI Director James Comey—but it was not enough to achieve victory in the skewed electoral college.

As of now, Biden is hugging that middle ground. He is already campaigning as a general election candidate who need not fret about capturing the to-the-left grassroots energy of his party. Moreover, his campaign’s raison d’etre—I can bring Democrats and Republicans together—is dramatically at odds with the passions of Democrats who desire a kickass vanquisher of Republican plutocracy. Yet for the moment, it is working. Despite the initial expectations of the political cognoscenti that Biden would have a tough time once he entered the race—with anticipated gaffes and possible fundraising problems—in the all-important polls he has cruised to front-runner status. He also is consistently coming in first in the polls that match Democratic candidates against Trump—a fact that his advocates cite as evidence of his electability. Still it is unclear how much excitement Biden is generating among the Democratic faithful. Advisers to other candidates are quick to point out that Biden rallies are not humdingers with overflowing crowds, and they insist that excitement does matter. Trump jazzed up folks, as did Obama.

Assessing electability—especially so long before an election—is not a science. It is mostly an expression of assumptions based on certain conventions. It can you tell you more about the proclaimer than the candidate. Sure, Biden can win the primary and then trounce Trump. But it’s also possible that his support within the Democratic electorate could crumble and that he could end up being a lousy match for Trump. His previous presidential campaigns did not fare well. Why shouldn’t that be a major factor in determining electability? The past is prelude, right? Or does it yield hard-won experience and crucial wisdom that can be shrewdly applied to the challenges of today?

You can play this game back and forth ad infinitum. Which is why no one should get stuck on the issue of electability. Whatever his qualifications on paper, Biden has to demonstrate he can be an effective campaigner over a long haul. That means conveying a compelling message, demonstrating voter appeal, and building an organization—without screwing up too much. He, his champions, and commentators can argue that he could be the most electable Democrat in November 2020, but there’s no way to know that now. At this point, electability is in the eye of the beholder. It is not Biden’s trump card. It is an argument he still has to prove and not a reason for anyone to assume that Biden deserves the nomination.