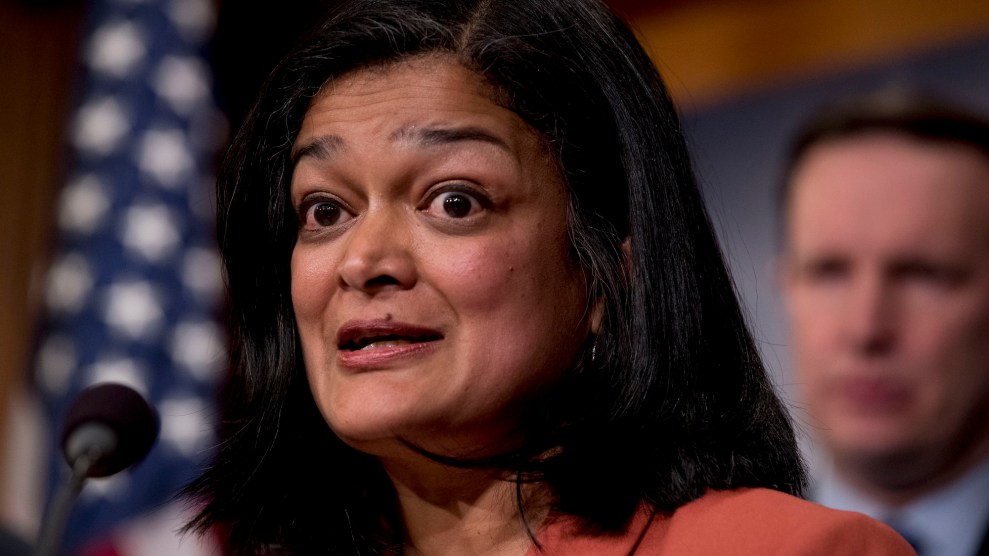 Republican lawmakers had bet that hearings for the House’s “Medicare for All” bill would surface deep disagreements among Democrats over their vision for the country’s health care system. But on Wednesday the bill was debated in its highest-profile venue yet, and instead of initiating an intraparty pillow fight, Democrats made a show of solidarity. They discredited the GOP’s attacks with a reminder of that party’s attempts to dismantle the Affordable Care Act.

The hearing of the House Ways and Means Committee was called “Pathways to Universal Health Care.” It served as an opportunity for members of Congress to debate not only Rep. Pramila Jayapal’s (D-Wash.) Medicare for All Act, which would establish a single-payer health care system, but also a number of other bills that would create universal care, such as Reps. Rosa DeLauro (D-Conn.) and Jan Schakowsky’s (D-Ill.) Medicare for America Act, which would create a federal insurance program but allow employer-provided plans to exist. As the 2020 field remains largely undecided on health care policy—save for Sen. Bernie Sanders (I-Vt.), who authored the Senate’s single-payer bill—the hearing offered a forum for airing the particulars of the various plans touted by Democratic presidential hopefuls on the campaign trail.

And yet it was the GOP’s attacks on the Affordable Care Act that took center stage. Republicans have spent the better part of the decade since the ACA became law trying to repeal it; they came close to succeeding during the summer of 2017. And in Wednesday’s hearing, Democrats rushed to the defense of their landmark health care legislation, taking pains to note that their Republican colleagues lacked a clear vision of what they would replace the ACA with should it be toppled.

Rep. Lloyd Doggett (D-Tex.), who signed onto Jayapal’s bill late last month, chided his GOP colleagues for their criticism of Medicare for All, calling it one in a long line of Republican attacks on health care. “Today’s Republican condemnation of Medicare for All continues a great Republican tradition of opposing Medicare for anyone,” Doggett said, noting that GOP rhetoric about Jayapal’s bill made the proposal sound like “the worst thing to happen to the world since plagues struck Egypt.” When it comes to health care, he added, the Republican Party “is intellectually bankrupt and is offering only Nothing Care.”

Rep. John Larson (D-Conn.), who is not a sponsor of Medicare for All but supports a bill that would establish a Medicare buy-in option, echoed his rhetoric. “We heard all about ‘repeal and replace,'” he said to Grace-Marie Turner, the president of the right-leaning Galen Institute, who appeared on behalf of the Republicans. “What would you have replaced it with, and can you cite [for] us the Republican plan that they replaced the Affordable Care Act with?”

That isn’t to say there was unanimity across the Democratic side. Most members of the Ways and Means committee are in Larson’s camp: Only 12 of the committee’s 25 Democrats support Jayapal’s bill, and members still devoted floor time to voicing support for the bills they preferred. That, apparently, wasn’t the preference of Rep. Richard Neal (D-Mass.): The Intercept reported on Tuesday that the chairman had asked his Democratic members not to use the phrase “Medicare for All” when they spoke. As the hearing unfolded, Neal didn’t quite get his way. Several Medicare for All cosponsors, like Reps. Doggett and Judy Chu (D-Calif.), made sure to vocalize their cosponsorship of Jayapal’s bill (while also noting their eagerness to shore up the ACA).

Just securing today’s hearing had been a tough sell. Jayapal, the author of the House’s single-payer bill, had gotten a commitment from House Speaker Nancy Pelosi that the House would hold hearings on Medicare for All this session. But convincing committee chairs to agree to the hearings was another matter. The only voices joining Jayapal’s calls for hearings had been Republicans. “We’re going to pull the curtain back on Medicare for All so the American people can actually assess it,” Rep. Kevin Brady of Texas, the top GOP lawmaker on the House Ways and Means Committee, told Politico earlier this year.

But the hearings have had the opposite effect within the Democratic caucus: Four high-profile Democrats have signed onto Medicare for All since the first of the hearings, including Assistant House Speaker Rep. Ben Ray Lujan (D-N.M.), a member of House leadership. In fact, that first hearing, held April 30 in the House Rules Committee, likely forced Neal’s hand.

Today’s event followed a familiar pattern. The headlines that emerged from the bill’s first public debate in the Rules Committee also spoke of Democratic unity: The Intercept called the hearings “strangely collegial,”  and Politico said Democrats “paper[ed] over rifts” as they focused their message on the party’s overarching aim: to remind voters of the GOP’s attacks on the Affordable Care Act.

There’s only one remaining committee of jurisdiction that hasn’t agreed to hold a hearing on Medicare for All: Energy and Commerce, another powerful committee. Its chair, Rep. Frank Pallone (D-N.Y.), is not supportive of Jayapal’s proposal. But she says the momentum may be on her side.

“I was just talking to some reporters today who said, ‘What about Energy and Commerce?'” Jayapal told me last week. “I was like, ‘Look, I’ve been an organizer for a long time, you work these steps.’ Each step gives up a foothold for people who might not have a foothold yet.”