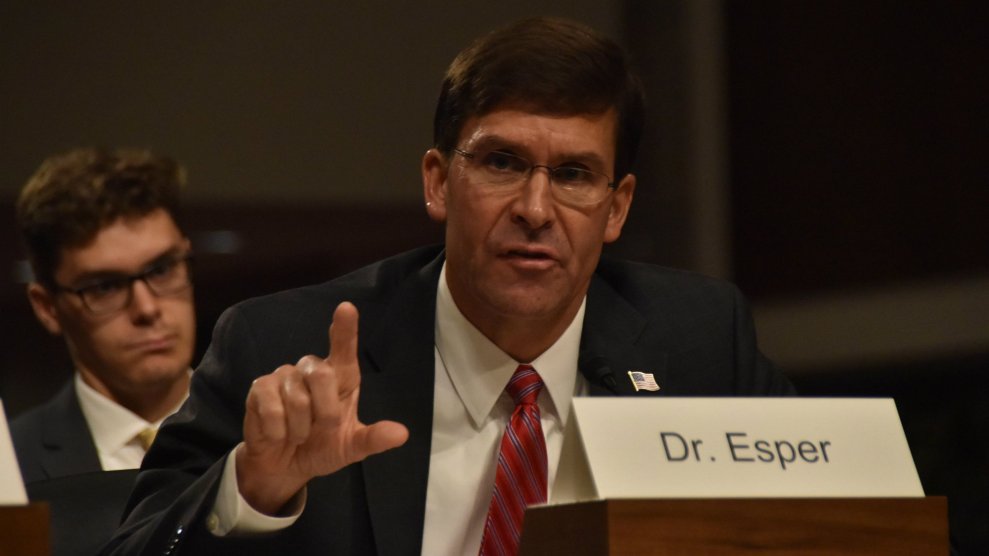 It only took 204 days, but the Department of Defense finally has a Senate-confirmed leader again. Ninety lawmakers voted Tuesday afternoon to elevate Mark Esper permanently to the position of Secretary of Defense and put an end, at least for now, to the bizarre game of musical chairs Pentagon officials have been forced to play in order to stock an unprecedented amount of vacancies across its top ranks. Only eight senators, including Elizabeth Warren (D-Mass.), who has been sharply critical of Esper’s work as a lobbyist for defense giant Raytheon, opposed his confirmation.

Esper, a West Point graduate with more than two decades of experience as a soldier, most recently filled in as acting Secretary of Defense after 19 months as the civilian leader of the Army. He will inherit a department that under President Donald Trump has become increasingly sidelined in policy discussions and littered with senior-level vacancies. Possible military confrontations with Iran and Venezuela loom as the administration winds down its war against the Islamic State and negotiates an end to the 18-year war in Afghanistan.

The staffing turmoil began under Trump’s first Secretary of Defense James Mattis, a retired Marine general, who led the Pentagon with a “skeleton crew,” leaving several crucial roles unfilled for months because the Trump administration preferred hiring loyalists over experienced national security professionals, the New Yorker reported. Mattis departed after a 23-month tenure, and Patrick Shanahan, an ex-Boeing executive with zero experience in foreign affairs or the military, took over in January as acting chief. But an exodus of Mattis-era officials had already begun.

Shanahan’s trajectory to the permanent top job was cut short because of a troubling history of violence inside his family, and, by the time the baton passed to Esper in June, more than a dozen senior positions—including the top three—were staffed by acting, or temporary, officials. With an especially erratic commander in chief leading the way, career Pentagon staff felt isolated during interagency discussions, while Secretary of State Mike Pompeo and national security adviser John Bolton took charge in guiding Trump’s national security policy. “The best advice is not getting through or even offered,” ex-Pentagon official John Gans, the author of a book on the history of the NSC, told Mother Jones last week, reflecting the view of many mid-level Defense staffers. “Nobody has really gotten off the back of their heels.”

Esper, who rose to the rank of lieutenant colonel, brings a wealth of experience to the Pentagon’s E-Ring, including stints as a congressional aide and chief of staff at the conservative Heritage Foundation. His bipartisan confirmation vote is a rarity for Cabinet officials in the Trump administration and a sign of lawmakers’ deepening concern over the instability plaguing an agency responsible for overseeing more than 3 million service members and one that, at least from a leadership perspective, has avoided this degree of turmoil.

Even as a Senate-confirmed leader, however, Esper will still have to cope with a Pentagon rife with instability among its highest offices. On Wednesday, acting deputy Defense secretary David Norquist will have his confirmation hearing for the Pentagon’s permanent No. 2 job, but that will require that he revert back to his comptroller position temporarily to make way for another acting figure. The Army and Air Force, meanwhile, still lack permanent leaders. Of the department’s numerous vacancies, Trump has only named potential replacements for three top positions, chief management officer, Army secretary, and Air Force secretary. He has formally nominated one of them, Lisa Hershman for the CMO position.

Other senior positions remain vacant, staffed by acting or temporary officials, depending on if the White House will nominate replacements and if the Senate will confirm them. Here are the positions waiting to be filled, according to the latest data provided by the Pentagon: