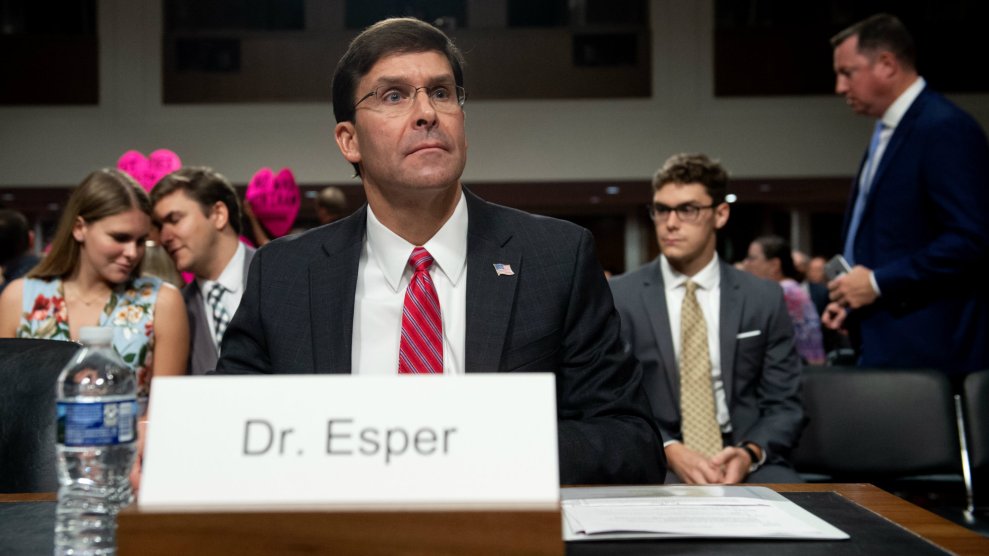 Secretary of the Army Mark Esper testifies in front of the Senate Armed Services panel during his confirmation hearing to lead the Pentagon.Saul Loeb/AFP/Getty

Esper was a top lobbyist for defense contractor Raytheon from 2010 until Trump nominated him as Army secretary in 2017 and he pledge to recuse himself from issues involving Raytheon for two years. Warren, a Democratic presidential candidate, has been calling for Esper to extend that pledge beyond November 2019, when it is set to expire. Patrick Shanahan, who preceded Esper as acting Pentagon chief before departing last month amid reports of violent turmoil within his family, had been an executive at Boeing before entering government and agreed to permanently recuse himself from issues involving his former employer. “You are not willing to make the same commitment?” Warren asked Esper. “Is that right?”

“I can’t explain why he made that commitment,” Esper said. “He was fulfilling a different role than I am.”

Esper graduated from West Point as a classmate of Secretary of State Mike Pompeo and served for more than two decades in the Army. After leaving active duty, he worked for three years as chief of staff at the Heritage Foundation, a conservative think tank, and advised then-Sen. Chuck Hagel. The Senate confirmed him as secretary of the Army in November 2017. Only six lawmakers, including Warren, voted against him.

On Tuesday, Esper refused to budge on Warren’s other requests, which would block him from rejoining Raytheon until at least four years after leaving the government, and would stop him from acquiring a waiver before his recusal period expires that would allow him to intervene in Raytheon-related matters. The exchange prompted an intervention from Senate Armed Services Committee Chairman James Inhofe (R-Okla.), who tried to cut off Warren and said she had exceeded her time limit. “This is outrageous,” Warren said.

Esper defended himself stridently. “I’ve stepped down from jobs that paid me well, more than what I was working anywhere else,” he said. “I think the presumption is that anybody that comes from the business or the corporate world is corrupt.”

Exchange between @SenWarren and Defense Secretary Nominee @EsperDoD on @Raytheon, ethics, waivers and conflicts of interest.

ESPER: "I think this is a good debate –"

WARREN: "I'm not trying to have a debate." pic.twitter.com/iu1Chu17ie

During her presidential campaign, Warren has released a raft of policy proposals, including plans to decrease the Pentagon’s carbon footprint and tighten ethics requirements for Defense Department officials. Using her perch as a member of the Armed Services panel, she urged the Pentagon’s independent watchdog to investigate Shanahan over allegations that he improperly favored Boeing in internal discussions. Though Shanahan was cleared of wrongdoing, the move sharpened Warren’s bona fides as an enemy of the defense industry. Earlier in her Senate career, Warren faced allegations of maintaining cozy ties with defense firms located in Massachusetts, including Raytheon.

Outside of his exchange with Warren, Esper faced few obstacles as lawmakers from both sides of the aisle generally refrained from challenging him harshly. Sen. Tim Kaine (D-Va.), who sharply criticized former acting Defense Secretary Patrick Shanahan at a Senate hearing in March, began Esper’s hearing by praising him as a person of “sound character and moral courage.”

“Most of us were very discouraged by the resignation of Secretary Mattis and what we’ve hoped for is a successor who can show the same level of candor and principle,” Kaine said. “I believe that Dr. Esper has those traits.”

Senators frequently returned to the example set by Mattis, the retired Marine Corps general who stepped down as Pentagon chief in December over disagreements with Trump’s treatment of allies and decision to withdraw American troops from Syria. Sen. Gary Peters (D-Mich.) asked Esper explicitly, “Would you be a secretary of Defense with views more aligned with Secretary Mattis or more aligned with President Trump?”

“I don’t know where to pick between the two, but clearly I shared Secretary Mattis’ views and I expressed that publicly,” Esper replied.

Warren will likely not be able to prevent Esper’s march toward confirmation, but she can delay the process by blocking the Senate’s ability to confirm him by unanimous consent this week. Navy Secretary Richard Spencer, who became the Defense Department’s latest acting leader this week, will remain in charge in the meantime.