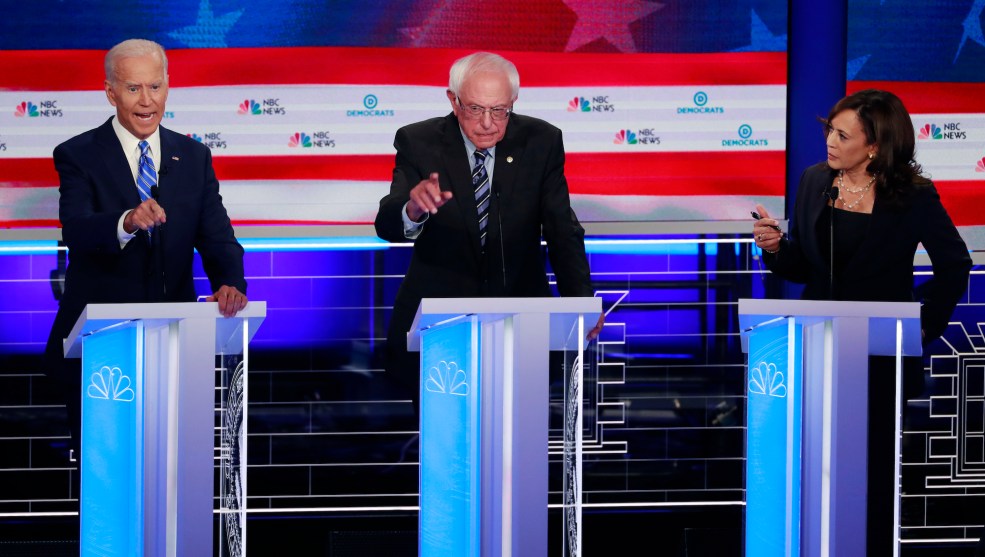 Twenty of the 25 Democratic presidential candidates have gone on record in favor of holding a debate devoted to climate change policy. In the past three days, five more candidates—including Kamala Harris—have told Mother Jones that they support a climate debate, raising the stakes for the Democratic National Committee, which has so far resisted allowing such an event to take place. In addition to the California senator, New York City Mayor Bill de Blasio, former Rep. John Delaney (Md.), and former Rep. Joe Sestak (Pa.) are now calling for a climate debate, joining big-name candidates including Joe Biden, Bernie Sanders, and Elizabeth Warren.

Earlier this year, the DNC announced plans to hold a dozen primary debates in 2019 and 2020 and to prohibit candidates from appearing in any debates that had not been approved by the national party. In April, climate activists launched a grassroots campaign demanding that one of the debates be dedicated to climate; they noted that presidential debate moderators had a long history of giving short shrift to the issue. It’s not just because activists want to vet candidate platforms and solutions, but because even getting candidates to talk more about an issue can raise the issue’s profile.

The activists quickly won support from Washington Gov. Jay Inslee, who has put global warming at the center of his campaign. But the DNC’s line all along has been that it wouldn’t hold any issue-specific debates.

The controversy reemerged after the first round of Democratic debates last week. Climate received 15 minutes of discussion over two nights, but the largely superficial discussion of the issue only seemed to strengthen the activists’ case, as key policy proposals such as the Green New Deal and 100 percent renewable energy mandates were virtually ignored.

DNC officials spent the weekend reconsidering the matter. The result was a pair of resolutions that could come up for a vote at the party’s August meeting. One proposal, backed by DNC executive committee member Christine Pelosi and others, would create a climate debate. A separate resolution, which Pelosi described as less ideal, would call for a forum in which candidates would appear individually to address climate policy. A third way forward, she suggested, might include an effort to survey party members about which issues deserve a standalone debate.

“It was somewhat ironic we [DNC officials] spent more time debating climate in our debate on Saturday than the candidates did Wednesday and Thursday,” Pelosi said.

If a climate debate does happen, much of the credit will belong to activist organizations like the US Youth Climate Strike, a teen-led group that has pressured candidates into endorsing the efforts. They plan to join with another youth-oriented group, Sunrise Movement, to keep up the pressure throughout the summer.

Still, six candidates either haven’t taken a position on a climate change debate or didn’t respond to requests for comment in time for publication. They are Sen. Cory Booker, who called for more time to be devoted to the issue after the first debate; Montana Gov. Steve Bullock; former Colorado Gov. John Hickenlooper; California Rep. Eric Swalwell; and author Marianne Williamson.

Here’s what each of the candidates have said:

Biden addressed a Greenpeace activist at a campaign rally in Ottumwa, Iowa, on June 11: “That’s what we should be doing,” he said. “I’m all in, man. Take a look at what I’m talking about—and by the way, the first climate change plan in the history of the Congress?” The campaign confirmed his position to Mother Jones in July.

He tweeted in response to a Youth Climate Strike activist:

We need a climate debate. There are quite simply few issues more important than the survival of our planet and people. https://t.co/yiOyFDUosx

The candidate tweeted a video of her reading a letter from an activist asking her to sign a petition for a climate change debate. “I’m up for that,” she said. She also backed Inslee’s pushback against the DNC:

Gov. Inslee is exactly right. Climate change is the biggest challenge we face. Every candidate running for president should have a serious set of policies to address it, and should be eager to defend those proposals in a debate. https://t.co/6uprXIJKa2

Buttigieg’s campaign confirmed to Mother Jones, “He would be open to doing a debate focused on the existential security challenge that is climate change.”

As we reach just a hair away from 30,000 signatures in only about 48 hours, our @IowaStrike Lead Lydia Pesek meets Pete Buttigieg who says he will “try to” support our petition. @PeteButtigieg, we hope you keep your promise and be a climate leader. Sign at https://t.co/65qmtSlsnX pic.twitter.com/QNL4VQV5Yu

Breaking! @BetoORourke is asked by one of our national organizers if he would support a #climatedebate!

His response: “I like that idea… I can’t see why we wouldn’t want to participate!”

Thanks Beto! We hope you come out in full support! pic.twitter.com/vlaxSVtV6B

Booker supports more climate change discussion, but the campaign told Mother Jones that the decision is in the hands of the DNC.

When asked if he supports a climate debate, @AndrewYang gives us an enthusiastic yes. “Very much so. I wanna be there!”

Thank you for supporting our movement Andrew!

Together, we WILL get a climate debate and comprehensive policy to stop the climate crisis. pic.twitter.com/E9HUTW6gc1

“John supports having a climate debate,” his communications director wrote in a July 1 email. “Climate has been a big part of our campaign and we mentioned our carbon fee and dividend plan during the debate last week.”

@TulsiGabbard believes we do need to have a debate on the climate crisis, and environmental protection. She also believes that there needs to be a debate devoted to the issue of regime change wars, the new Cold War and nuclear arms race. #Tulsi2020 #NoMoreWars #Debate

Thank you so much @amyklobuchar for being a leader on not only supporting the #climatedebate, but taking the #NoFossilFuelMoney pledge from Day One! Keep signing and sharing the petition and https://t.co/65qmtSlsnX to get past the platitudes and straight to the policy on climate. pic.twitter.com/MKvV4IVLkg

I’m in! Climate change is a global crisis that knows no borders. My first executive action as President would be to recommit the U.S. to the Paris Climate Accord, and to reestablish America as a leader in the fight against climate change. #EarthDay https://t.co/4hsc3sT1Xb

“A DNC debate focused on climate change would show the world that America intends to lead again on this issue, and would be a smart place to discuss the key tenets of the Green New Deal—infrastructure, green jobs and clean air and water—and how to put a price on carbon,” she told the Daily Beast.

Bennet told Politico he thought a climate debate would be “great.”

Yep, and we’d love to have Mike Gravel come. We’re proud to support.

Inslee was the first candidate to endorse a climate change debate, on April 17, launching his own petition aimed at the DNC. “I cannot rule out any other debate that would highlight both the necessity of defeating the climate crisis and calling for the candidates to step up to the plate,” Inslee said in an interview with Mother Jones. “Sixty-second sound bites, which is all you’ll be able to get in a party debate, is grossly inadequate to the task.”

“Mayor Messam welcomes a debate on Climate Change!,” a spokesperson for the mayor of Miramar, Florida emailed on Wednesday. “Climate Change threatens are very existence and we must act now.”

@JayInslee is right, we need a climate debate.

While we’re at it, let’s have a national security debate too. The American people deserve to hear all candidates’ positions on these critical issues.

I’m in! Climate change demands unprecedented action that requires our full and complete attention. This is an economic issue, a social justice issue, and a national security issue. @MoveOn https://t.co/CTaJcJ16nY

The candidate wrote on Wednesday in an email to Mother Jones, “How could you not? It is the most destructive threat to America and mankind.”