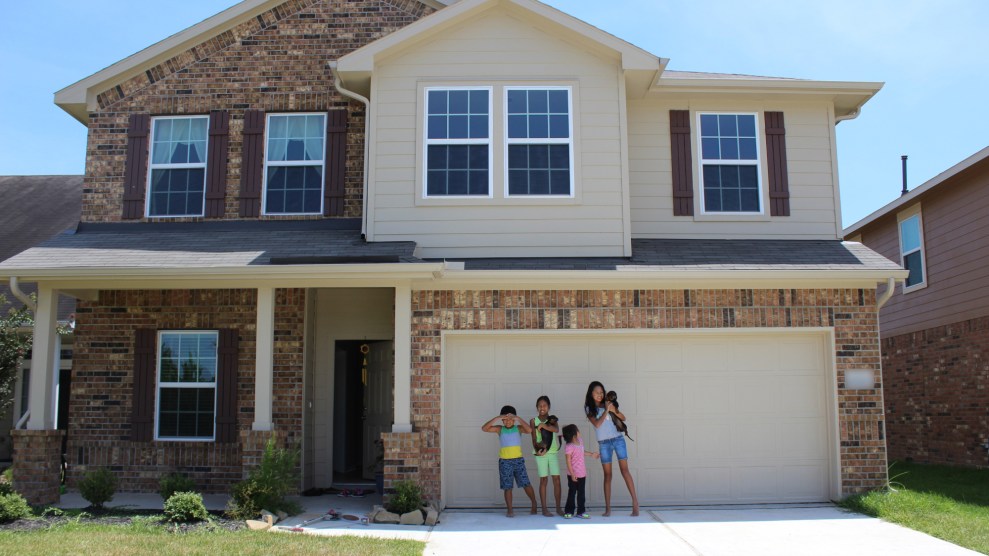 The Villanueva kids outside their suburban Houston home.Courtesy Jason DeParle

In the late 1980s, a young journalist named Jason DeParle moved in with a Filipino family in Manila to learn more about global poverty. Now a veteran New York Times reporter and author of the 2004 book American Dream: Three Women, Ten Kids, and a Nation’s Drive to End Welfare, DeParle followed the family he met as they have grown to include more than four dozen people over three generations, spread across the globe as migrant workers.

His latest book, A Good Provider Is One Who Leaves, follows Rosalie Comodas Villanueva, who was 15 when DeParle was living in Manila, from her childhood in a shantytown in the Philippines through college and eventually to a career as a nurse. She worked in Saudi Arabia and the United Arab Emirates before moving her husband and three children to a large home in the Houston suburbs. Through it all, she supports her family back in that Manila shack.

“Migration has become the defining story of the twenty-first century,” DeParle writes. “By the accident of an old friendship, I had an intimate view.”

We caught up with DeParle to learn more about this story, where Rosalie’s family fits into the kaleidoscope of the American immigration experience, and how her story resonates in the time of Trump’s draconian immigration policies.

Let’s start with the title. What does it mean and why is migration such a way of life for the Comodas and other families like them?

The title comes from the main character’s aunt, who was watching the men in her generation go abroad and then be able to build their families nicer houses. She lived in a straw house and saw that when people went abroad, they could come back and build cement block homes. So she encouraged her husband to go to Saudi Arabia and told him “a good provider is one who leaves.” It serves as an informal motto for the family, because it’s a family of 11 siblings who then grew up and had 45 children. And out of the first generation, nine of the 11 went abroad and in the second generation, something like 24 out of the 45 have gone abroad. So they’ve taken it to heart. They do leave. And most of them are good providers.

One of the things that really jumped out at me was your discussion of the feminization of migration. Why did you choose to tell this story primarily through women?

If it was a choice, it wasn’t one I consciously made. I moved in with a family in a shantytown in 1987. The father was abroad in Saudi Arabia, and the mother was home, raising the kids on the money he sent back. So she happens to be the person I spent the most time with. Then in her children’s generation, migration in the Philippines feminized—three-quarters of the migrants going abroad by the 1990s from the Philippines were women. I think the stories took me in that direction more than me deciding to take the story in that direction.

The second generation went abroad around the time when social media, cellphones, and the internet were becoming ubiquitous. I loved the chapter “The Facebook Mom.” Could you describe how technology has shaped migration?

By the 1990s migration is feminizing, in part because the jobs are feminizing. As rich countries around the world age, there’s a huge need for caregivers. As women go to work in the paid workforce, there’s an increased need for childcare. As medical care expands, there’s a need for more health care workers. So in all these fields where there’s a lot of female employment, there’s demand for female workers.

But the consequence of the feminization of migration is that you have a lot of kids left—a lot of mother-child separation. When the mothers go abroad, oftentimes they can’t take the kids with them; in the case of nannies, they go abroad to raise someone else’s kids while leaving their own children behind. That’s a source of pain—often for the children, sometimes even more for the mothers.

And all this happened to coincide with the rise of cheap, instantaneous communication including cellphones and social media and webcams and Facebook. It gave mothers and children new tools to stay in touch. Thinking of Rosalie’s family, when her father went abroad first in the early 1980s, if he had a question for his family, he would send a letter or sometimes an audiotape. By the time it got to the Philippines and came back with an answer, a month would have passed. When the next generation when went abroad, often they were talking to their families three times a day. They knew what they had for breakfast, they could keep track of the kids’ homework, and they could see their friends on Facebook.

You’ve described Rosalie as the sort of immigrant who is invisible in the political debate. Where do you see her story fitting into the current American conversation about immigration.

Most of the conversation about immigration is focused on illegal immigration, and currently most of it is focused on the crisis at the border. And that’s a very important story—we’re focused on it for a reason—but I think it obscures the rest of the immigration story. Three-quarters of immigrants in the country are here legally. And there’s substantial middle-class immigration and professional immigration. You know, for most of the post-1965 era, the modern migration era, Filipinos have ranked second only to Mexicans in terms of actual numbers in the US, yet they’re virtually invisible. So I think their story has been overlooked as Filipinos, as legal immigrants, and as middle-class immigrants.

One of the big questions about immigrants since the 19th century has been assimilation—fitting in, learning the language, educating their children in American schools, and all the problems that may involve. How does this play out in your story?

There are a lot of critics of immigration who say this generation of immigrants is failing to assimilate the way previous generations of immigrants did. But I think that, if anything, they might be assimilating faster. English acquisition is almost universal. Nearly half the new immigrants already arrived with a college education. Half live in the suburbs. And certainly, in the family that I followed, they achieved in three years a degree of assimilation that used to take three generations. They bought a house in the suburbs, they have kids on the honor roll, the kids learned English—not only learned English but forgot Tagalog. They can’t speak Filipino anymore. Assimilation took place at a kind of breakneck speed that’s completely at odds with the political conversation about it. In a country of 44 million immigrants, no single story is universal, but this is the one narrative that is certainly missing from the presidential Twitter feed and missing from the discussion of immigration more broadly.

It does seem like the million-dollar question here is where does Trump fit into all of this? Has the Trump administration changed anything for folks like the Villanueva family—literally or figuratively?

It’s probably too early to say. I don’t think any of us really know what effect a narrative of spite is going to have on the immigrant population. The fear is if you tell people long enough and loudly enough that they’re not welcome, they’ll come to believe you. My fear is that it will turn into a self-fulfilling prophecy. You’ll say, look, immigrants don’t want to join us. And by creating such a hostile environment, you’ll create an ethnic reaction and separate ethnic identity. That is exactly what we don’t want.

On the other hand, you know, American culture consists of lots of other things besides Donald Trump. Maybe they’ll all watch enough Rosa Parks movies and get enough lessons on Harriet Tubman and black history month that Donald Trump’s views will not change their experience of being an American. But a lot of that obviously is going to depend on the circumstances of the individual family, especially their legal status. The family I followed, of course, is middle class and legal, so they’re not really affected in any immediate way.