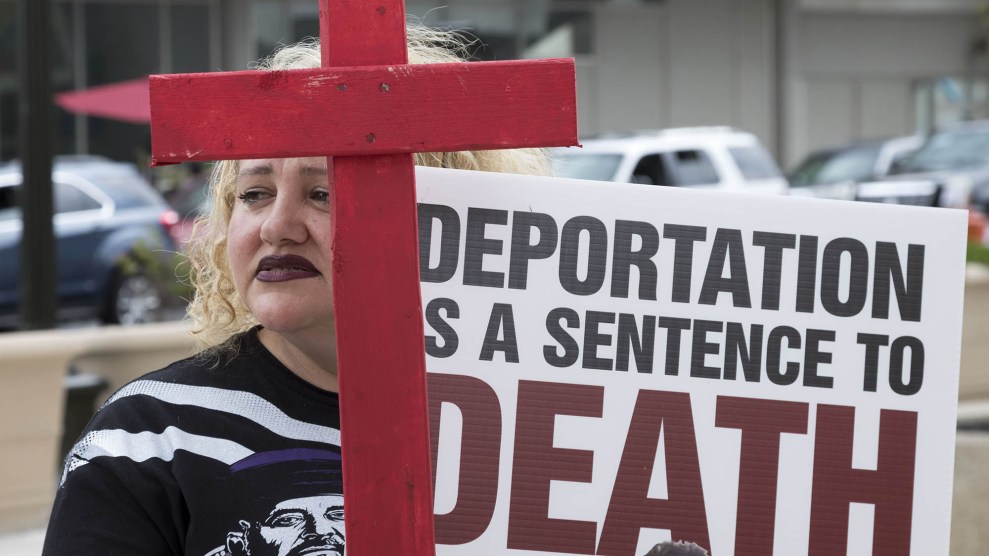 A woman protests the deportation of Chaldeans in Detroit in 2017.Jim West/Zuma

A Detroit resident deported to Iraq—a country he had never visited, with a language he did not speak—died this week because he was unable to obtain insulin for his diabetes.

The man, 41-year-old Jimmy Aldaoud, was deported in June and died Tuesday. A Greek-born Iraqi national, he said in an undated Facebook video prior to his death that he had lived in the United States since he was six months old and had never been to Iraq before. He was a Chaldean Catholic, a religious group that traces its roots to present-day Iraq, where its members face a high risk of persecution by ISIS, Politico reports.

“I’ve been throwing up, sleeping in the streets, trying to find something to eat,” Aldaoud says in the video. “I got nothing over here, as you can see.”

Chaldeans, motivated by President Donald Trump’s promise to eradicate ISIS and protect persecuted Christians, helped Trump win Michigan in 2016. (The Detroit area is home to the largest number of Chaldeans outside Iraq.) But Trump struck a deal with Iraq in 2017 that took the country off the president’s travel ban list in exchange for allowing the United States to deport Iraqis back to the country. Soon Chaldeans were being rounded up for deportation to a country some had never lived in—many Chaldeans were born in refugee camps—even though US law prohibits sending people to countries where they’re likely to be tortured or persecuted. Last year, some Chaldeans in detention reported being coerced by US immigration authorities into signing documents granting permission to deport them.

Aldaoud was one of 1,000 Iraqis the Trump administration has tried to deport with final orders of removal, according to Politico. He was also one of countless US residents who have died under dangerous conditions in the countries to which they had been deported. A Columbia University’s Graduate School of Journalism investigation published by the New Yorker in 2018 identified more than 60 such cases, including people deported under both the Trump and the Obama administrations.

The basis for Aldaoud’s deportation was a history of legal issues, including disorderly conduct and home invasion, that friends say resulted from his schizophrenia.

Rep. Andy Levin (D-Mich.) said that Aldaoud should not have been deported. “My Republican colleagues and I have repeatedly called on the executive branch to cease deportation of such vulnerable people,” he told Politico in a statement. “Now, someone has died.”