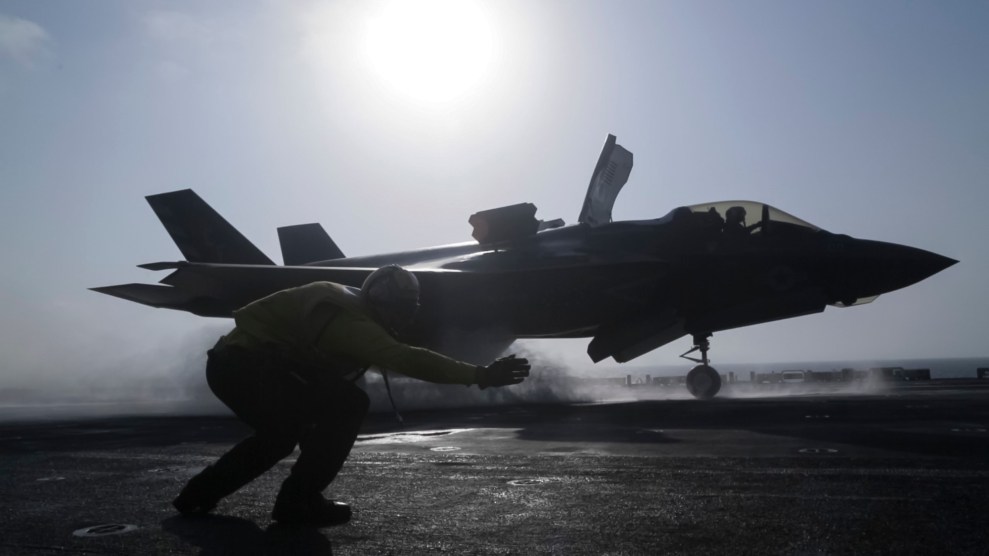 The F-35 fighter jet program has long been, as they say in the military, FUBAR. With a price tag that was slated to be $233 billion, the program’s costs have doubled over the past two decades, even as hundreds of jets remain unfit for combat and remain stuck in testing. The so-called stealth jet of the future has increasingly commanded a larger presence on the Pentagon’s balance sheet than on the battlefield.

Dan Grazier, a fellow at the Project on Government Oversight, a nonpartisan watchdog that advocates for slimmer defense budgets, has written extensively about the F-35’s many problems. Last week, he broke the news that the 23 test aircrafts at Edwards Air Force Base in California were “fully mission capable” just 11 percent of the time from December through June. This average falls far short of the 80 percent goal set by Defense Secretary James Mattis last year and reflects the sorry state of Pentagon readiness even as Lockheed, the number one recipient of government contracts, plays an increasingly important role in guiding defense policy.

And yet, despite its many troubles, the F-35 remains not only a crucial part of the Pentagon’s strategy for conquering the skies, but a signature component of its relationship with Capitol Hill and America’s allies abroad. Forty-six states rely on jobs created by the F-35 and in 17 of them, the jets generate at least $200 million of economic impact, according to Lockheed’s data. Across the pond, the United Kingdom and 11 other countries have signed up to receive F-35 joint strike fighters as part of an agreement with the US. The jet’s significance is so uncontested that when Turkey accepted a Russian-made defense system last month, the Trump administration’s punishment was to kick it out of the F-35 program. Lawmakers have repeatedly chided the Pentagon for its management of the F-35, and even President Donald Trump once bemoaned its “tremendous cost” in a tweet, but both parties have been reluctant to cut off Lockheed’s gravy train or come up with a cheaper alternative.

Underperformance by the F-35 has been bad and appears to be getting worse. Nearly every month there appears a slew of reports lambasting some aspect of the program, from Lockheed’s data management to cockpit pressure within certain jets that cause “excruciating” ear and sinus pain for pilots. According to the Government Accountability Office, between May and November 2018, F-35 jets achieved “full mission capability” only 26.8 percent of the time; the Pentagon’s minimum acceptable rate is 60 percent. During this period, “fleet-wide F-35 aircraft performance did not meet any of the US warfighter’s requirements,” a GAO report concluded in April. The F-35’s performance has suffered across the military, but Grazier described the results at Edwards as especially alarming given that these aircraft were part of an operational testing fleet that “receives extra support in the form of larger maintenance crews, and is presumably higher on the priority list to receive spare parts.”

There is a number of reasons why this particular high-profile aircraft has been mired in problems, but one crucial element is the near-total control that Lockheed Martin, the primary contractor, exerts over an array of functions critical to the F-35’s supply chain. “There are so many parts of this problem that are wholly controlled by Lockheed Martin,” Grazier told me. “These are problems that are baked into the system.”

For instance, the Defense Department is often left at Lockheed’s mercy to fix or replace jets that have broken down. Even a missing spare part can sink an aircraft’s ability to complete a mission effectively. Within the F-35 program, Lockheed “is responsible for allocating parts” across the globe—not just to the United States—leaving American service members with “no control” over how their repair needs are prioritized, the GAO report found. This uncertainty has led personnel, in some cases, to strip parts from other aircraft rather than wait some indefinite period for new parts to arrive.

The military can’t even price their options fairly, because Lockheed controls access to how many spare parts are available. Pentagon officials have apparently tried negotiating with the defense contractor to gain access to this data, but these efforts failed because of the “high price” the government would have been charged to access it, according to the GAO report. “This is potentially quite the subterfuge,” Grazier wrote in June. “It calls into question whether Lockheed Martin actually has the information readily at hand.”

No one has pulled a Lockheed executive in front of Congress to ask. Meanwhile, lawmakers from both parties keep approving the purchase of more fighter jets despite these increases leading to “exacerbated pressure on the supply chain,” Bloomberg reported. The defense authorization bill passed by the Senate in June approves the purchase of 94 more F-35 fighters, 16 more than the White House had requested.