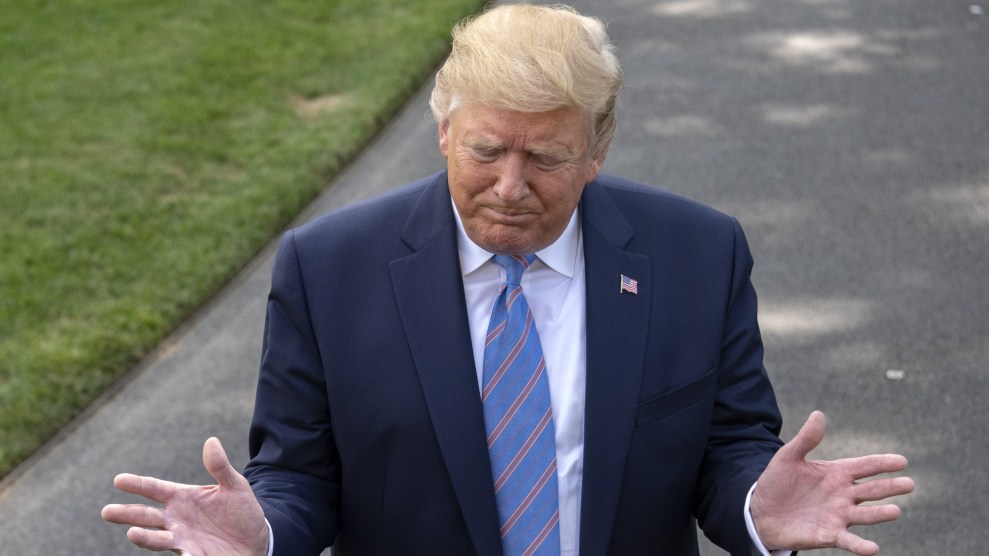 President Donald Trump on Saturday resumed his promotion of a far right commentator who called for a “final solution” after a terrorist attack in the United Kingdom and blamed Jewish support for immigration for provoking the mass shooting at a Pittsburgh synagogue last year.

On Saturday morning, Trump twice retweeted British pundit Katie Hopkins, who first gained prominence as a contestant on the BBC TV series The Apprentice and has since drawn attention through what are widely seen as bigoted attacks on Muslims. In the tweets Trump promoted, which Hopkins posted on Thursday, Hopkins criticized London Mayor Sadiq Khan over knife crime in the city and faulted German Chancellor Angela Merkel for crimes committed by Syrian migrants in Germany.

Trump also retweeted Hopkins last month when she defended him in the midst of his racist attacks on Rep. Ihan Omar (D-Minn.) and other members of Congress. The president urged four congresswomen color—all of whom are American citizens and three of whom were born in the United States—to “go back” to the “crime infested places from which they came.”

Hopkins’ past statements, including her comparison of migrants to cockroaches, were highlighted last month. In continuing to promote her, Trump is hammering home the already obvious fact that he is consciously deploying divisive and overtly racist language in a bid to rile up his supporters.

Trump is also screwing up his own defense of his attacks on Omar and others, who he has accused of anti-Semitism because of their criticisms of Israel’s government and its supporters. Hopkins left a talk radio job after she used the Nazi term “final solution”—apparently in reference to Muslims—following a 2017 suicide bombing at a concert in Manchester, England. In a tweet last year, Hopkins blamed the “Chief Rabbi and his support for mass migration” for provoking the shooting that killed 11 people at the Tree of Life Synagogue in Pittsburgh. She later deleted both tweets. But it’s hard to claim that you are fighting anti-Semitism when you are amplifying someone who uses such rhetoric.