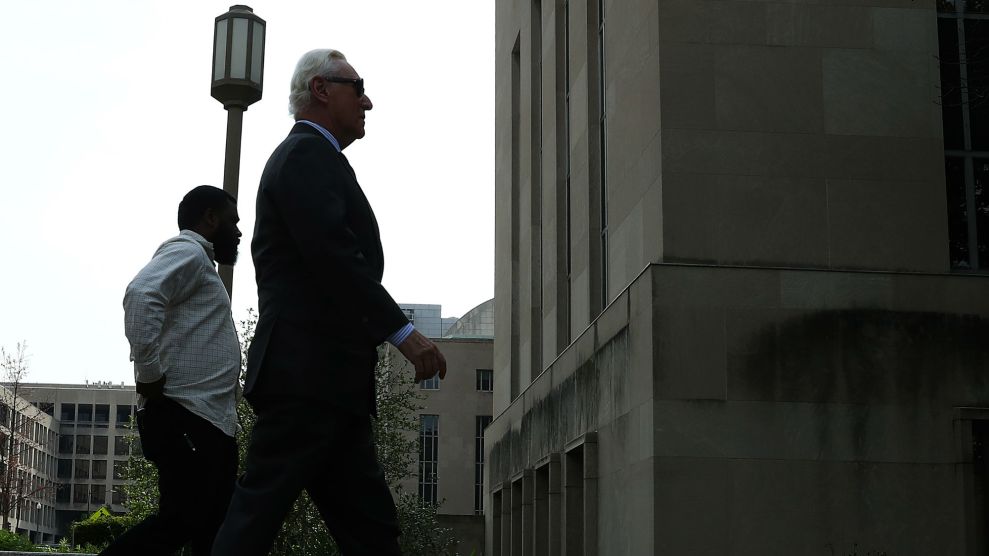 Impeachment is in the air, as House Democrats focus on the still-growing Ukraine scandal as the reason to move forward with the ultimate political punishment. But the Trump-Russia scandal is about to make its own comeback. On November 5, Donald Trump’s longtime political adviser Roger Stone—the dirty trickster who had for years encouraged Trump to run for president—will go on trial in a federal court in Washington, DC, facing charges that he lied to Congress about his interactions with WikiLeaks during the 2016 campaign, as the organization was publicly disseminating Democratic material stolen by Russian hackers. Stone also was indicted for allegedly obstructing justice and witness-tampering. Though the trial will determine whether Stone tried to bamboozle a congressional investigation, it could answer two bigger questions about the president: Did Trump use (or try to use) Stone as a conduit to WikiLeaks, and did Trump lie to special counsel Robert Mueller? The former might not be illegal; the latter could be a crime.

In the publicly released version of Mueller’s final report, Stone, the flamboyant provocateur and conspiracy theorist, is conspicuously absent. The Justice Department redacted most of the portions of the report that referenced Stone because his trial was pending. So it’s unclear what Mueller had on Stone. But the report contains clues suggesting that the full story of Stone’s involvement in the Trump-Russia scandal goes beyond what’s publicly known—and that it implicates Trump.

As has been already documented, Stone, during the Russian attack on the 2016 election, repeatedly declared he was in contact with WikiLeaks and its founder, Julian Assange. Throughout that stretch, he sent out tweets predicting WikiLeaks would release material that would torpedo Hillary Clinton’s campaign—tweets that reinforced the impression he was in communication with WikiLeaks while it was part of the Russian operation. Stone—who remained in contact with Trump and his campaign after he was ousted from his official role in the Trump 2016 effort—also privately communicated with Guccifer 2.0, an online persona created by the Russian hackers. And Stone repeatedly claimed in public that Moscow had nothing to do with the hack of the Democratic National Committee servers, echoing Moscow’s propaganda. After the Russia scandal exploded, Stone changed his story and insisted that he had not been in direct touch with WikiLeaks and Assange. That is, he has essentially said he was lying and exaggerating during the 2016 campaign. He maintained it had all been “posture, bluff, hype.”

Yet Mueller’s report tantalizingly suggests that, in 2016, Stone directly interacted with Trump about WikiLeaks and its plans to release the documents pilfered by the Russian cyberthieves. The report includes this highly redacted section:

This shows that Trump sought inside information on what material WikiLeaks had and what it intended to do with the stuff. And it’s clear that in this tight campaign circle of Paul Manafort, the campaign manager, Rick Gates, the deputy campaign manager, and Trump, there was at least one other player—whose name was redacted—whom the campaign was relying on to find out what Assange was up to. At one point, according to the report, Trump apparently spoke to this person or someone else about what WikiLeaks had coming.

Beyond the Mueller report, the New York Times reported that Stone in 2016 traded emails with Steve Bannon, Trump’s campaign CEO after Manafort departed. In those emails, Stone purported to have inside information on Assange’s plans for releasing the hacked Democratic emails. WikiLeaks would release “a load every week going forward,” Stone told Bannon on October 4, 2016.

Stone’s trial could yield evidence that indicates whether Stone was talking to Trump or anyone else in the campaign about WikiLeaks—and whether he was viewed within Trump’s inner circle as a conduit to Assange.

Both Bannon and Gates are expected to testify as prosecution witnesses in Stone’s trial—an indication the proceeding will confirm that Stone was in contact with Trump campaign higher-ups about WikiLeaks during the election. Part of the federal case against Stone is that he lied to lawmakers when he said he had not communicated with the Trump campaign about what he knew (or claimed to know) about WikiLeaks’ plans. Stone’s and Gates’ testimony could address that and show whether the Trump campaign—and Trump himself—saw Stone as a go-between with WikiLeaks or a source of inside skinny on the Russia-WikiLeaks operation against Hillary Clinton. A person familiar with Bannon’s role in the trial says Bannon expects to testify that he communicated with Stone and that Stone “was portraying himself to Bannon as someone who was in touch with Assange.”

Back to the mystery man in the redacted paragraph from the Mueller report. It’s tough to think of anyone else in the Trump-Russia saga who would fit this bill other than Stone. The reason provided for the redactions in this section—the information could harm an “ongoing matter”—is a strong hint that Stone’s name appears under those blacked-out stretches. If so, that would mean Stone had been passing information to Trump and the campaign about WikiLeaks. In that case, one question would be if that information came from WikiLeaks itself—or if Stone had received it from another source or was just pretending to know more than he did.

Why does this matter? There are several reasons. First, if Trump or his senior campaign aides thought Stone was communicating with WikiLeaks—whether or not he actually was—and they were receiving information from him related to WikiLeaks, that would mean they believed then that the Trump campaign had a back-channel contact to WikiLeaks as it participated in the Russian operation. Trump has long shouted there was “no collusion.” But perhaps Trump thought at the time that he and his campaign were colluding. After all, a significant Trump adviser consorting with WikiLeaks at this point could be construed as some sort of collusion.

Stone’s trial could yield evidence (beyond his emails with Bannon) indicating whether Stone was talking to Trump or anyone else in the campaign about WikiLeaks—and whether he was viewed within Trump’s inner circle as a conduit to Assange. If Trump and the campaign in any way had tried to reach out to WikiLeaks through Stone while WikiLeaks was facilitating a Russian assault on an American election, that would be a big deal.

The Stone trial could also produce material that challenges what Trump told the special counsel. The president refused to be interviewed by Mueller, but Trump agreed to answer a set of written questions—as long as the queries only covered what happened during the campaign, not any activity that occurred after he became president (meaning actions related to the allegations that Trump obstructed justice). In the questions Mueller submitted to Trump, he asked several times about Stone, including these three:

Were you told of anyone associated with you or your campaign, including Roger Stone, having any discussions, directly or indirectly with WikiLeaks…regarding the content or timing of released of hacked emails?

Did Mr. Stone ever discuss WikiLeaks with you, or, as far as you were aware, with anyone else associated with the campaign?

Did Mr. Stone at any time inform you about contacts he had with WikiLeaks or any intermediary of WikiLeaks, or about forthcoming release of information?

In his written responses, Trump made these two statements:

I do not recall being told during the campaign that Roger Stone or anyone associated with my campaign had discussions with any of the entities named in the question regarding the content or timing of release of hacked emails.

I do not recall discussing WikiLeaks with [Stone], nor do I recall being aware of Mr. Stone having discussed WikiLeaks with individuals associated with my campaign.

Trump acknowledged that he had spoken with Stone “from time to time during the campaign,” but the man who has often boasted he has a great memory added that he had “no recollection of the specifics of any conversations he with Stone between June 1, 2016, and Election Day.”

Go back and read the paragraph from the Mueller report above. Who did Trump speak to on the phone during the ride to the airport? And when Manafort was under pressure to get information on WikiLeaks, who did he turn to? Who was pressing Manafort to find out WikiLeaks’ plans? Could it be someone other than Trump? Unless there’s a character in the story who has yet to be revealed, it seems probable that Stone was the guy trying to gather information from WikiLeaks for the Trump campaign—and that Trump knew about this.

Will the Stone trial provide answers? A lawyer for Stone did not respond to questions from Mother Jones. But any material presented in the courtroom that fills in the redactions would go far toward resolving all this. The evidence could also reveal whether Trump lied to the special counsel—which would be obstruction of justice and a crime. (Mueller’s final report, however, noted that Justice Department policy prohibits the indictment of a sitting president.) Throughout the Russia scandal, Trump has been caught in assorted lies, as he has continuously denied or dismissed the Russian attack that helped him become president. That scandal may be taking a back seat to the Ukraine controversy fueling the ongoing impeachment inquiry (though, in a way, the Russia affair led to the Ukraine scandal, with Trump pressing the Ukrainian president to investigate—and prove—a nutty conspiracy theory that claimed Moscow did not hack the 2016 election). This trial of a conniving Trump confidante who specializes in the political dark arts will be a reminder of the original scandal of the Trump administration that has tainted and undermined his presidency, and it could add another big lie—and a possible crime—to Trump’s long record of wrongdoing.