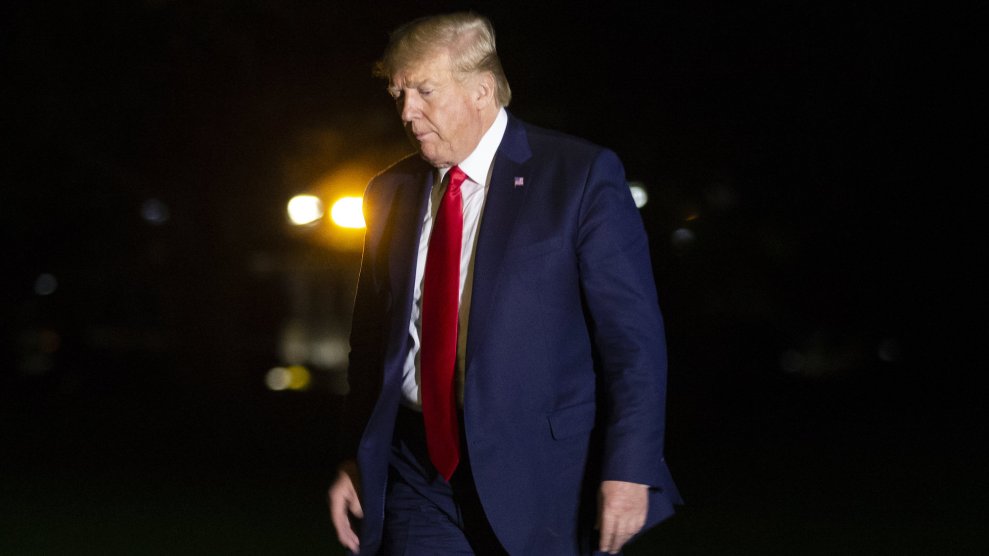 In the past two weeks, President Donald Trump has allowed Turkey to slaughter Kurds, awarded an international summit to one of his own resorts, and watched his chief of staff admit (then un-admit) to a quid pro quo with Ukraine. Although it feels strange to even type these words, some Republicans in Congress may be reaching their limits with Trump. The Washington Post reports:

A growing number of congressional Republicans expressed exasperation Friday over what they view as President Trump’s indefensible behavior, a sign that the president’s stranglehold on his party is starting to weaken as Congress hurtles toward a historic impeachment vote.

In interviews with more than 20 GOP lawmakers and congressional aides in the past 48 hours, many said they were repulsed by Trump’s decision to host an international summit at his own resort and incensed by acting White House chief of staff Mick Mulvaney’s admission—later withdrawn—that U.S. aid to Ukraine was withheld for political reasons. Others expressed anger over the president’s abandonment of Kurdish allies in Syria.

Rep. Francis Rooney (R-Fla.), who represents a district that Trump won by 22 points, has been particularly candid about his potential willingness to impeach the president—or about as candid as it gets amongst his colleagues. “I’m still thinking about it, you know?” Rooney said. “I’ve been real mindful of the fact that during Watergate, all the people I knew said, ‘Oh, they’re just abusing Nixon, and it’s a witch hunt.’ Turns out it wasn’t a witch hunt. It was really bad.”

Trump has been forcing GOP legislators to “defend the indefensible,” a senior House Republican aide told the Post. “You have to go out and try to defend him,” Rep. Mike Simpson (R-Idaho) said. “Well, I don’t know if I can do that!”

“I have no doubt that Doral is a really good place. I’ve been there, I know,” Simpson added about Trump’s decision to host next year’s Group of Seven summit at the Florida resort. “But it is politically insensitive. They should have known what the kickback is going to be on this, that politically he’s doing it for his own benefit.”

John Kasich, the former presidential candidate and Republican governor of Ohio, has also jumped on the impeachment bandwagon:

John Kasich: "If I was sitting in the House of Representatives today, and you were to ask me… do I think impeachment should move forward and should go for a full examination and a trial in the United States Senate, my vote would be yes." https://t.co/PsAT634Ags pic.twitter.com/ysKlr5q72s

Despite the unusually forthcoming criticism, Trump still has a firm hold over most of the party he has held hostage since 2016. As a senior Senate Republican aide told New York magazine’s Olivia Nuzzi, “The White House is just like, ‘Oh, Trump will handle everything.’ Which is crazy — but it seems like that’s their strategy. It’s a depressing time.”

Nuzzi asked if anything would change for conservatives who’ve been unwilling to publicly voice voice their frustrations. “It’s all bullshit until it’s not,” the aide said. “At this point, it is bullshit. Obviously it could change, but it hasn’t. So who cares?”