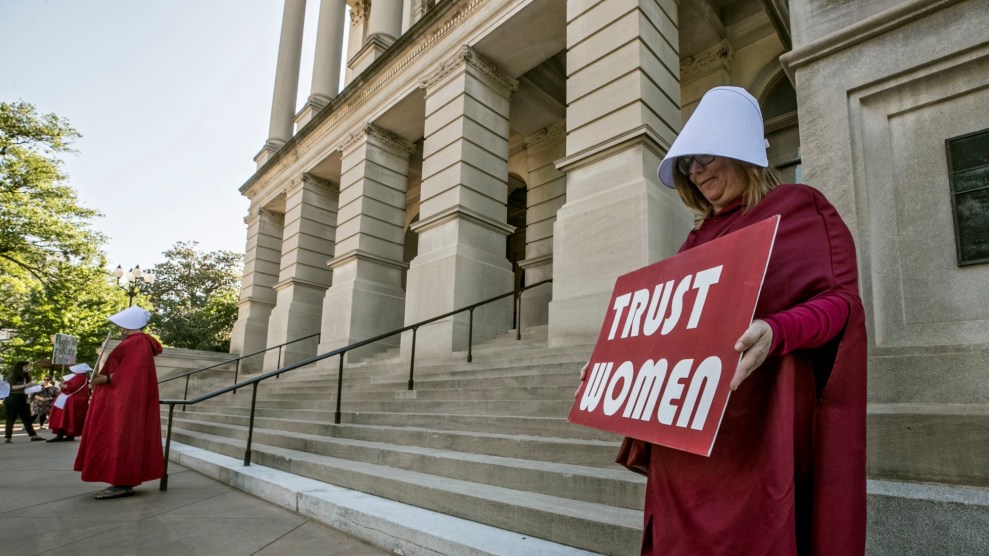 Michelle Disher and others dressed as characters from "The Handmaid's Tale" protest outside the Capitol, where Georgia’s Republican Gov. Brian Kemp, was to sign anti-abortion legislation in May.Bob Andres/Atlanta Journal-Constitution via A

On October 1, a federal judge blocked a Georgia law banning abortion after six weeks of pregnancy. On the very same day, a nearly identical bill was introduced in the Florida state legislature.

For every legal setback to the recent efforts by Republican state lawmakers to impose effective blanket bans on abortion, there’s been another push to pass new ones. But with the courts in seeming unanimous agreement on the unconstitutionality of these measures, even anti-abortion groups are doubting the wisdom of the slew of bans.

The Florida bill, filed by Republican state Rep. Mike Hill, would ban abortions when a fetal heartbeat can be detected, generally around six weeks, which is often before a woman is aware of her pregnancy. The bill would also make it a felony for doctors to perform these abortions, punishable by up to five years in prison.

South Carolina legislators are also considering a bill that would ban abortions after a fetal heartbeat can be detected and make providing an abortion after that point a criminal offense. Nine states have passed bans on abortion pre-viability: Georgia, Ohio, Kentucky, Louisiana, Alabama, Mississippi, Missouri, Utah, and Arkansas.

The confirmation of Supreme Court Justice Brett Kavanaugh in October of 2018 spurred many state legislatures to pass abortion bans in the hopes of getting a case to the Supreme Court that could overturn Roe v. Wade.  “In 10 to 15 states for the last 30 years, legislators have passed anti-abortion laws that in their view move the envelope toward further restricting the right to abortion,” says Stephen Wermiel, a constitutional law professor at American University. “Now, with Kavanaugh replacing [Anthony] Kennedy, I think the states feel a strong interest in trying to push farther to see one of two things: either if they can get Roe overturned altogether or if they can significantly advance restrictions on abortion.”

However, so far none of these laws have been upheld by federal judges. Without a split among the federal courts on the abortion bans, Wermiel says, the Supreme Court is unlikely to take up any of these cases.

“I think the Supreme Court isn’t sitting around anxious to have to decide one of these,” he says. “The real question will be: Does the court have to pick one of those cases [as a result of] the federal appeals courts being in conflict? But so far, none of the federal courts have upheld any of these pre-viability bans.”

Major anti-abortion organizations such as Americans United for Life have openly spoken out against these bans, arguing that they are not the best strategy to roll back abortion access.

“They are not likely to make it to the Supreme Court,” says Steven Aden, chief legal officer for Americans United for Life. “For that reason, we think there are other more productive means of the state expressing its respect for life.”

While the Louisiana law is the only abortion-related case currently before the Supreme Court, conservative state legislatures are likely to continue pushing abortion bans, says Elizabeth Nash of the Guttmacher Institute, a research organization focused on reproductive health. “Where we are seeing these bans move and get enacted are states where in recent years they have passed restriction after restriction after restriction,” she says. “So in some ways this is really the last thing to do.”

In addition, Nash believes lawmakers are motivated by a desire to seem tough on abortion. “I also think that states are looking to try to jockey for most anti-abortion state in the country,” she says, adding, “This gins up their base and proves their conservative bona fides.”

Abortion-related legislation tends to drop off in major election years, given how controversial it is. But Nash thinks 2020 may be different. “I feel like abortion will be an election issue, and for conservatives perhaps in a different way because of the Supreme Court, because of the threat to Roe,” she says, adding, “I can imagine that we are going to see more on abortion bans in 2020.”

Even though the Supreme Court has yet to take up any of the abortion bans, Wermiel argues that these laws pose the most direct threat to Roe v. Wade.

“The interesting [thing] about the bans is, probably more than anything else, they would force the Supreme Court to confront overruling the right to abortion,” he says. “Because you can’t essentially say bans after six weeks are not an undue burden on a woman’s ability to get an abortion. The court can’t simply uphold the ban and say it doesn’t violate the right to abortion…So if the court gets one of those cases and takes it, it almost certainly has to confront the question of overruling Roe.”