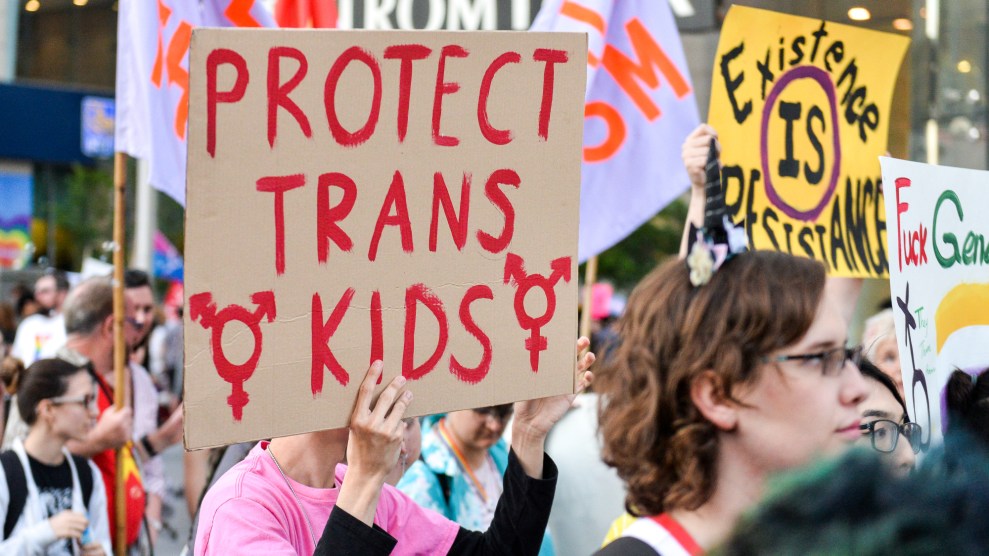 A demonstrator holds a sign at the Trans March during Toronto's Pride Month.Anatoliy Cherkasov/SOPA Images/Getty

Rachel Gonzales has spent the last two years battling Texas lawmakers to protect her kid. She first stepped foot in the statehouse in 2017, to testify against a bill that would bar her 7-year-old, transgender daughter from using the girl’s bathroom. Next came an effort to stop a bill to prohibit family courts from using a parent’s affirmation (or lack thereof) of a child’s transgender identity as a consideration in custody hearings.

Both bills eventually died, but Gonzales is now gearing up for yet another fight. This fall, two Republican lawmakers in the state vowed to introduce legislation barring trans kids from receiving certain gender-affirming health care and criminalizing parents who allow their children to transition.

And Texas isn’t the only place where conservatives are trying to make it harder for trans kids to live in accordance with their gender identity. In November, a Republican representative in South Carolina introduced legislation that would prohibit “gender reassignment medical treatment” for people under the age of 18. Doctors who provide such care would be professionally sanctioned and could potentially lose their medical license. A bill that is being drafted in Georgia would make it a felony for medical professionals to aid in a minor’s gender transition. A lawmaker in Kentucky said in a public Facebook post that she is also at work on a similar bill.

“I really wish that our politicians would stop using young children for their political gain,” Gonzales says. “It’s so frightening to have the people that are supposed to be protecting all kids across the state to be instead picking and choosing who they want to protect and targeting the ones that they don’t.”

All of the bills were spurred by the sensationalized story of a Texas custody battle between two parents with vastly different views on gender identity. The case involved a 7-year-old kid who, according to reports, had been identifying as a transgender girl for years. Her father claimed the feminine gender identity was being forced on the child by her mother, and refused to help cover the costs of therapy or any gender-affirming care. Earlier this year, he made pleas at the state capitol and on several social media pages, claiming his child was being used as a pawn in some socially progressive scheme to revoke his parental rights.

The Daily Caller first picked up the story about the custody fight from a local news website run by a former Republican state senator. Then Fox News and conservative pundits like Matt Walsh joined in the fray. Some warned of “chemical castration,” even though the actual custody dispute revolved around social transitioning—affirming the person’s gender identity by using their chosen name and pronouns—which involves no medical interventions. They published video and photos of the child, supposedly proving their point. Soon, the story had been picked up by Donald Trump Jr.

Shortly after, Texas Rep. Matt Krause promised to introduce a bill in 2021, the next time the state legislature will be in session, to bar minors from using puberty blockers, a gender-affirming medical treatment that allows transgender kids to temporarily postpone puberty so they have more time to explore their gender identity. Another Texas Republican, Rep. Steve Toth, vowed to introduce legislation that would criminalize parents who allow their child to transition. In a tweet, Toth said the legislation would be the very first bill he filed next session. The misconstrued facts of the case were like a dog whistle, rallying troops for the anti-LGBTQ culture war, and soon lawmakers in and out of Texas started to get involved.

Having lost the battle to stop transgender people from using public bathrooms that conform to their gender identity, conservatives have doubled down on trying to control the private lives of trans people. This time, Republican strategists are putting transgender kids, and the people who support them, at the center of an effort to shore up conservative support. According to Andrew Reynolds, a political science professor at the University of North Carolina-Chapel Hill, gender identity remains the most divisive identity issue—more so than race, ethnicity, sex, religion, disability status or even sexual orientation—for American voters, and conservatives in particular. In a recent study from the Public Religion Research Institute, nearly three-quarters of Republicans surveyed believe there are only two genders. Only one third said they would be “somewhat or very comfortable” with having their child come out as transgender. (A little more than half of Democrats said they believe gender exists in spectrum, and 60 percent said they would be comfortable having a trans child.)

And this anti-trans strategy isn’t limited to local politics. An advocacy group called the American Principles Project waded into Kentucky’s gubernatorial elections this year by running a series of inflammatory ads warning that the Democratic candidate would let boys play on girls’ sports teams. The New York Times described the effort as a pilot program to determine how to “use the debate over transgender rights to rally conservative voters in support of President Trump.”

Reynolds says if you look at it from a strictly strategic perspective, rights for transgender people are “the only one of the LGBTQ+ issues that still has some resonance” among voters. “It’s the only lever, I would say, that still can drive conservative, religious, white voters—fearful voters—to Republicans.”

This year, lawmakers in Illinois and New Hampshire tried to pass bills criminalizing parents and doctors who helped kids transition. South Dakota legislators proposed a bill that would allow parents to refuse transition-related health care for their kids. None of them passed.

Of the upcoming legislation, only the South Carolina bill text has been released so far, so the exact language in the others is unclear. But many of the announcements surrounding the proposals included hyperbolic talk of “castration,” “genital mutilation” and “radical surgery.” A pediatric endocrinologist quoted in the press release announcing the Georgia bill described medical transitioning for minors as “medical experimentation based on wishful social theory.”

“There’s been this incredibly wonderful and impactful rise in visibility of transgender people in the public sphere,” Oakley said. “But at the same time, I think there are many folks who are not educated who have a lot of confusion, who have a lot of questions. Opponents of equality have seized on that gap between visibility and understanding, and they’re trying to exploit that.”

Dr. Izzy Lowell, an Atlanta-area doctor who primarily treats queer patients, says the transition process for young trans kids is often far less dramatic than opponents suggest. Lowell describes herself as conservative when it comes to prescribing hormones, and says for very young patients she tells their parents to “do nothing other than social transition.” She tells them to “affirm that child’s gender, as much as you can, but let them lead—never impose a gender on them.”

That’s more or less how things went for Gonzales’ family.

“There’s definitely this image put out there that your kid comes to you and says ‘hey, I’m a girl,’ and you’re like ‘fantastic! let’s go change your name at the courthouse,'” Gonzales says. The process looks different for every family, but “by the time we decided to embrace [my daughter’s] social transition, she had been telling us who she is for at least two years, probably longer.”

Gonzales’ daughter is now nine years old and still not at a point where she is considering gender-affirming medical treatment.

“We do nothing, medically, until they start puberty,”  says Lowell, who has treated hundreds of queer kids (but not Gonzales’ daughter). Hormone blockers are only meant to delay puberty, “so that [kids] don’t develop characteristics of the wrong gender for them.” The process is entirely reversible, as are the first few months of hormone therapy for older kids. She starts kids on very low doses of hormones until they’re sure the treatment is making them feel better. “It doesn’t happen very often, almost never,” that a patient asks to stop hormone therapy.

Opponents of medical transition for minors often argue that there hasn’t been enough research into the long-term effects of puberty blockers and cross-hormone therapy on things like brain development and fertility. But Lowell, Oakley and Reynolds all point to the well-established consequences of vilifying trans kids as reasons familial acceptance and puberty blockers are important. Transgender youth have a significantly higher suicide rate than their cisgender peers, and research has suggested that family acceptance and gender affirmation can go a long way toward reducing the risk of suicide attempts.

“A whole bunch of really dangerous things are exaggerated when the state says you’re not valid or questions your existence,” Reynolds says. “This [political] strategy has significant consequences for individuals and their ability to function.”

Though Gonzales hasn’t put much thought into puberty blockers and hormone therapy yet, she describes them as potentially “lifesaving interventions” for transgender kids. She says when the time comes, she won’t hesitate to start her own daughter on puberty blockers.

“It’s insane that any legislator would suggest that they know better than me and our family medical professionals when it comes to my daughter’s health,” Gonzales says. “They’re writing a death sentence for our children if they pass a law that prevents them from receiving [puberty] blockers.”