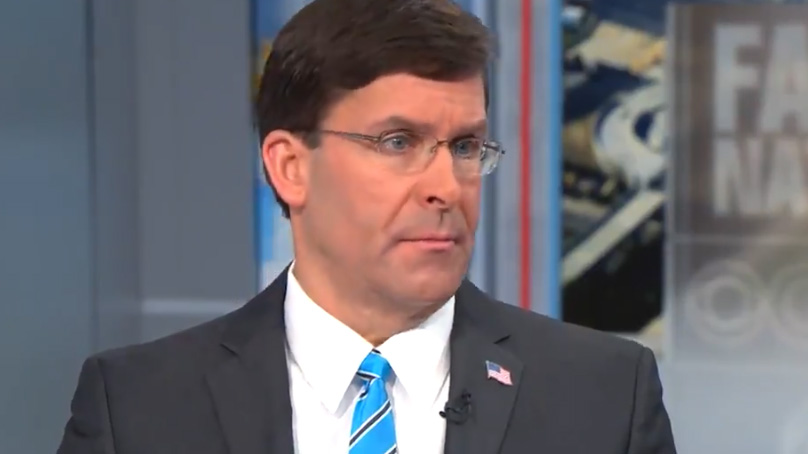 President Donald Trump’s evolving rationale for the killing of a senior Iranian general continues to raise eyebrows, and now the Pentagon’s chief says he did not see evidence Trump cited on Friday about threat from Iran.

On Friday during an interview on Fox News, Trump said the United States killed Gen. Qassem Soleimani earlier this month to avert an imminent attack on four US embassies, the first time the administration had made that specific claim. Secretary of State Mike Pompeo defended that assertion later in the day, saying “we had specific information on an imminent threat, and those threats included attacks on US embassies period, full stop.”

But that talking point seemed to unravel on Sunday, as Defense Secretary Mark Esper said that while he shared that view that four embassies were in danger, he had not seen any specific intelligence to back that up. “What the president said was he believed there probably and could’ve been attacks against additional embassies,” Esper said in an interview on CBS’s “Face the Nation.”

“I shared that view; I know other members of the national security team shared that view. That’s why I deployed thousands of American paratroopers to the Middle East to reinforce our embassy in Baghdad and other sites throughout the region,” Esper said.

But the president, he crucially added, did not cite a “specific piece of evidence.”

“Are you saying there wasn’t one?” host Margaret Brennan asked.

The defense secretary didn’t answer directly. “I didn’t see one with regard to four embassies,” he said. “What I’m saying is I share the presidents’ view.” Esper made similarly oblique comments in a Sunday interview with CNN’s Jake Tapper, saying he would not discuss intelligence matters on the show.

Secretary of Defense Mark Esper: "I'm not going to discuss intelligence matters here on the show -"

Jake Tapper: "The President did, though"

The Trump administration has come under pressure to reveal more details about its decision to launch the drone attack against Soleimani, which prompted Iran to respond last week with missile strikes on Iraqi bases hosting American troops. During a classified briefing on Wednesday with national security officials, members of Congress say they did not hear anything about four US embassies.

“I feel like I would have remembered if they would have presented that kind of intel at the briefing,” Sen. Chris Murphy (D-Conn.) told the Washington Post. “It sounds to me like the administration is panicking a little bit about the soundness of their rationale and deciding to share information with Fox News that they aren’t willing to share with Congress.” Referring to Trump, Murphy added, “I don’t trust what he said.”

National security adviser Robert O’Brien, in an interview Sunday on Fox News, said he wasn’t sure why the embassies did not come up in the briefing, which he did not attend. “I don’t know how the Q&A went back and forth. Sometimes it depends on how the questions are asked and how they were phrased,” he said.

He, too, was vague about any specific evidence pointing to four embassies at risk. “It’s always difficult, even with the exquisite intelligence that we have, to know exactly what the targets are but it’s certainly consistent with the intelligence to assume that they would have hit embassies in at least four countries,” O’Brien added.

Members of Congress say the Iranian threat to blow up multiple U.S. embassies was not mentioned in the intel briefing. But the President says there were threats to four embassies. Plus, is the Trump administration's strategy working? Robert O'Brien reacts. #FNS pic.twitter.com/hqIMScY2Tk