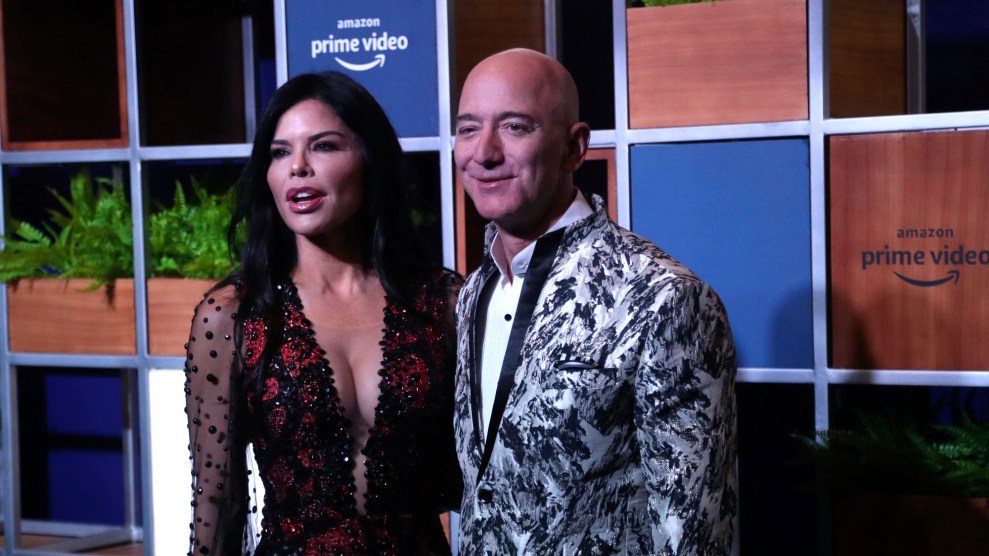 Amazon CEO Jeff Bezos, with Lauren Sánchez during an event organized by Amazon Prime Video in Mumbai in mid-January.Rafiq Maqbool/AP

Update, February 4, 12:00 a.m. ET: On Friday, Michael Sanchez, the brother of Jeff Bezos’s girlfriend, sued the Amazon boss and his security associate, Gavin de Becker, in a California court, alleging defamation. Now the Bezos camp is hitting back in a scathing motion filed by his powerhouse lawyers on Monday, slamming the case as a shakedown and seeking an immediate dismissal.

“Mr. Sanchez is now bringing this action to gain money from Mr. Bezos, the very person whose information he sold to the National Enquirer,” the filing reads. “Mr. Sanchez claims he is doing so because he is now unhappy about news coverage concerning the media maelstrom that he helped cause after receiving the $200,000 and betraying his sister.”

“Extortion rears its head again,” the lawsuit continues. “The Complaint fabricates defamatory statements to manufacture a basis for a lawsuit.” The lawyers are seeking a dismissal of all allegations by a California court under the state’s “anti-SLAPP” laws, which allow courts to kick out lawsuits that could stifle someone’s First Amendment rights, if they are deemed meritless. Mother Jones has contacted Sanchez for a reaction to the counterclaims.

For over a year, intrigue has hung over the January 2019 National Enquirer story that revealed Amazon boss Jeff Bezos’s intimate texts to his secret girlfriend, Lauren Sanchez, an on-camera Hollywood regular and aerial cinematography entrepreneur. On Friday night, the saga took yet another soap-operatic turn: Lauren’s older brother Michael, the LA-based talent manager she accuses of betraying her by selling her communications to the Enquirer, filed a lawsuit against Bezos in a Los Angeles state court alleging the billionaire defamed him in the press.

The suit could muddy a mystery that was thought by some to have been solved: Who leaked Bezos’ dick pics to the tabloids? Was it the rogue sibling? Was it a Saudi plot?

In the legal complaint, Sanchez accuses Bezos and his longtime security associate Gavin de Becker of defaming him by stating that Sanchez was the source of unpublished nude photographs of Bezos. He also accused Team Bezos of “peddling rumors to reporters that Mr. Sanchez was involved in a conservative conspiracy with high-profile political operatives, including Roger Stone and Carter Page, and the Saudi government to take down Mr. Bezos.” The Daily Beast reported just over a year ago that Sanchez was an outspoken Trump supporter with ties to Roger Stone and Carter Page.

Lauren Sanchez quickly denied her brother’s version of events outlined in the lawsuit. She sent a statement to Mother Jones through her lawyer, Terry Bird, saying she believes her older brother, “secretly provided my most personal information to the National Enquirer—a deep and unforgivable betrayal.”

“My family is hurting over this new baseless and untrue lawsuit,” Sanchez said in the statement, which first appeared in TMZ. “We truly hope my brother finds peace.” Sanchez, through her lawyer, did not respond to detailed questions outlining specific allegations her brother made in the lawsuit.

To understand the Sanchez complaint, it’s important to look at just how intense the fallout from the Enquirer’s 11-page special edition spread has been. It sparked the world’s most expensive divorce, valued at $38 billion, and thus far has featured two “you can’t make this stuff up” twists: Bezos publishing emails that revealed Enquirer executives were holding him ransom over unpublished dick pics, and his associate, de Becker, alleging a malign cybersecurity conspiracy between the Enquirer and the Kingdom of Saudi Arabia, who he said were operating “in league” to bring the billionaire down. It’s a claim that Bezos (aided by the United Nations) only partially backed up this January with privately commissioned forensics showing that Saudi Crown Prince Mohammed bin Salman, known as MBS, infected Bezos’s iPhone with WhatsApp malware and has been sucking up a mind-bending amount of personal data since May 2018. The report sought to strengthen evidence of MBS’s alleged motive: Bezos owns the Washington Post, where relentless coverage of the grisly death of its columnist, Jamal Khashoggi, had enraged the crown prince. The report however, failed to connect the Saudis to the Enquirer.

The 14-page complaint will likely inflame one of the most contested questions at the heart of the scandal: What did American Media Inc., the former owners of the National Enquirer, know—and more importantly, how and when did AMI know it? The lawsuit doesn’t provide any additional documentary evidence on those questions. (Mother Jones didn’t obtain the complaint through the court, but a copy was verified as authentic by Sanchez’s lawyer, Enoch Liang.)

The suit does, however, present the most detailed version to date of Michael Sanchez’s side of the story, and his professed motivations, and it could potentially force new evidence to come to light if the case proceeds. Since the story broke last year, Sanchez has admitted to working with AMI on the story in some capacity (a “deal with the devil,” he told Fox News), but he has denied having ever possessed the dick pics at the heart of AMI’s alleged extortion attempt, even as fresh reports emerged in the Wall Street Journal in January that federal investigators possessed information indicating Sanchez had received some of the text messages in question from his sister. In a widely circulated email to reporters across a spectrum of media outlets last week, Sanchez claimed, “without a shadow of a doubt, my sister Lauren never sent me Jeff Bezos’ ‘below-the-belt-selfies,'” and accused AMI of being “desperate to distract from their business deals with Mohammad bin Salman.”

“Without a shadow of a doubt, my sister Lauren never sent me Jeff Bezos’ ‘below-the-belt-selfies,'” Sanchez claimed.

According to the New York Times and the Wall Street Journal, Sanchez entered into a $200,000 arrangement with the company several months before the Enquirer story dropped. But in the lawsuit, Sanchez says the company already knew about his sister’s relationship with Bezos from others at the time he struck a deal, and that he was working to soften the impact of a potential scandal by engaging with the supermarket tabloid. “With AMI stating it had multiple sources claiming that Mr. Bezos and Ms. Sanchez were having an affair, Mr. Sanchez agreed to corroborate the existence of the relationship under conditions that would help Mr. Sanchez manage the timing of the story and the way in which the affair was portrayed,” the lawsuit reads. Sanchez also claims, without providing supplementary evidence, that the confidentiality agreement with AMI “prevented The National Enquirer from publishing any screenshots Mr. Sanchez provided.” Sanchez also claims his house was raided by the FBI.

AMI’s press representative did not respond to detailed questions from Mother Jones, but the company has been at pains to clarify that Michael Sanchez was the sole leaker of all information regarding his sister’s relationship, and has described its practices as legitimate negotiations in the pursuit of news-gathering. “The single source of our reporting has been well documented,” AMI recently told the Washington Post. “Any suggestion that a third party was involved in or in any way influenced our reporting is false.” The company’s denials of any untoward interference began almost immediately after Bezos’s extortion allegations, made in a February 7, 2018, post on Medium. A few days later, AMI’s lawyer Elkan Abramowitz appeared on ABC’s This Week with George Stephanopoulos to start shoveling blame in that direction. “It was somebody close to both Bezos and Miss Sanchez,” Abramowitz said. “Any investigator that was going to investigate this knew who the source was. It was not the White House, it was not Saudi Arabia.” AMI dropped any protections for its source soon after.

AMI’s loud denials of wrongdoing are perhaps unsurprising to close observers of AMI’s role in the Trump universe: Any evidence raising questions about its legal propriety could imperil an immunity deal the company hammered out with federal prosecutors in 2018 over the Trump campaign hush-money scandal. In that case, investigators seeking more information about a so-called catch-and-kill scheme to bury news about the president’s alleged affairs allowed AMI boss David Pecker and his top lieutenant Dylan Howard to provide information about Trump’s fixer, Michael Cohen, who is now serving three years in prison for campaign finance charges and other crimes. But as Mother Jones reported last year, the deal was conditioned on AMI keeping to the letter of the law—and it could be re-assessed at any time in light of new information.

In August, Mother Jones reported that federal investigators began requesting corporate documents and questioning AMI staff after the company produced a National Enquirer special edition that lavished praise on Saudi Arabia and MBS—the very same leader now accused of hacking Bezos’s phone. FBI agents had zeroed in on the circumstances behind the magazine’s publication to assess whether AMI had engaged in illegal influence peddling on behalf of a foreign power.

Amazon’s spokesperson declined to answer specific questions about the case, but William Isaacson, a lawyer for Jeff Bezos and Gavin de Becker, told Mother Jones in an emailed statement that his clients have “chosen to address this lawsuit in court and we will do that soon.”