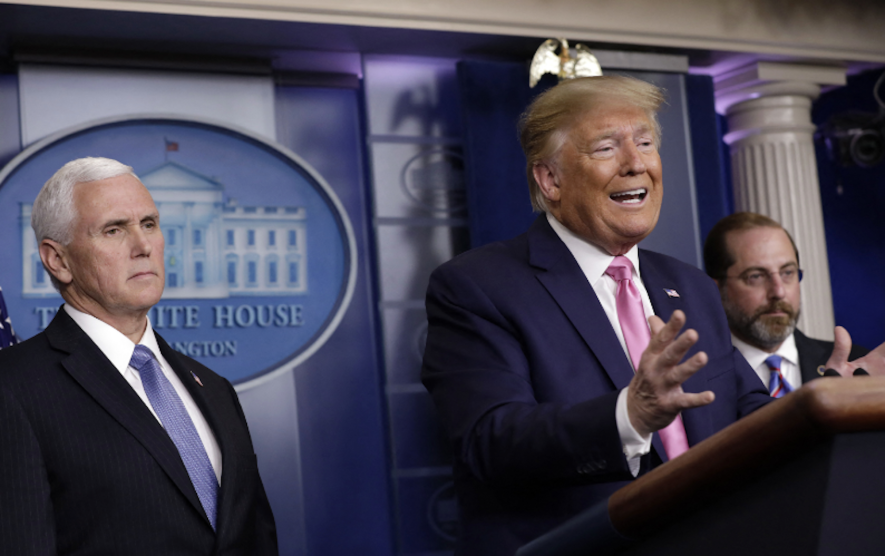 President Donald Trump has been scrambling to project confidence and cool-as-a-cucumber calm after the Centers for Disease Control and Prevention issued a warning earlier this week that outbreaks of the coronavirus in the United States are inevitable. His various statements have rattled many, sparking worries that Trump is undermining government scientists to prevent further stock market declines ahead of 2020 presidential election.

But the chaotic messaging that exploded into public view this week isn’t the only thing that should trouble Americans. Look no further than the men leading the White House response—Vice President Mike Pence, Health and Human Services Alex Azar, National Economic Council Director Larry Kudlow, and, of course, the president himself—and serious questions about the administration’s ability to handle a public health emergency become clear. Let’s take a look at why:

The vice president, who has been tapped to oversee the coronavirus response despite lacking a scientific background, has a long record of flat-out rejecting science. As Mother Jones has previously noted, as governor of Indiana, Pence “ignored public health officials’ warnings about the state’s HIV outbreak”—delaying for months before finally agreeing to experts’ pleas for him to approve needle-exchange programs designed to stem the crisis. His efforts to destroy the Affordable Care Act and Planned Parenthood have made him a hero in evangelical circles, while his embrace of debunked science—including the false theories that “smoking doesn’t kill” and “global warming is a myth”—is well-documented.

Nevertheless, Trump on Wednesday declared Pence the perfect man for the job.

The Health and Human Services secretary is heading the government’s coronavirus task force. But it’s Azar’s storied career as a drug company executive and role in doubling the price of insulin as president of the pharmaceutical giant Eli Lilly that have some concerned. In November 2017, Democrats were outraged by Trump’s choice to lead the department, arguing that Azar’s close ties to the pharma industry were disqualifying. They also cited his antipathy for the Affordable Care Act and women’s reproductive rights when opposing Azar’s appointment. The New York Times reported at the time of Azar’s confirmation:

Senator Patty Murray of Washington, the senior Democrat on the Senate health committee, said Wednesday: “I’m alarmed that Mr. Azar believes a woman’s employer should be able to decide, based on ideology, whether or not her birth control should be covered. I’m alarmed by his extreme and out-of-touch views on Roe v. Wade,” the 1973 Supreme Court decision that established a constitutional right to abortion.

Senator Tim Kaine, Democrat of Virginia, explained why he had decided to oppose Mr. Azar: “The Trump administration’s determination to destroy the Affordable Care Act through executive action has destabilized our health care system and threatened coverage for millions. I fear Alex Azar could make things even worse.”

Lawmakers were similarly stunned this week when Azar refused to promise that a coronavirus vaccine would be made affordable for all Americans:

Today, HHS Secretary Alex Azar wouldn’t guarantee that a coronavirus vaccine would be affordable to all.

Under the Trump doctrine, if you’re wealthy you can buy a vaccine, but if you’re poor or working class you may get sick or even die.

That is outrageous and unacceptable. 2/3

Secretary Azar is refusing to promise that a Coronavirus vaccine will be affordable to every American. Kick them out of office.

With financial markets across the globe plummeting in response to coronavirus, the White House’s top economic adviser on Monday appeared on CNBC to downplay the CDC’s warning before offering a rosy view of coronavirus’ economic effects. “The business and the economic side, I don’t think it’s going to be an economic tragedy at all.” As for the chances of a wider outbreak in the United States, Kudlow asserted, “We have contained this, I won’t say airtight but pretty close to airtight.”

Relying on Kudlow to pacify a spooked market is perplexing. Prior to joining the Trump administration, Kudlow was infamous for his extremely wrong financial predictions. “There’s no recession coming,” Kudlow said in December 2007, just one month before the Great Recession started. “The pessimists were wrong. At a bare minimum, we’re looking at Goldilocks 2.0.”

Then, of course, there’s the president himself. Trump has an impressive portfolio, with decades of science-denial, a presidency in many ways defined by dismantling Obamacare and Planned Parenthood, and budget proposals aimed at dramatically slashing global health policies. He has even repeatedly claimed, falsely, that vaccines cause autism. It’s hard to imagine someone less-suited to confront the coronavirus threat.