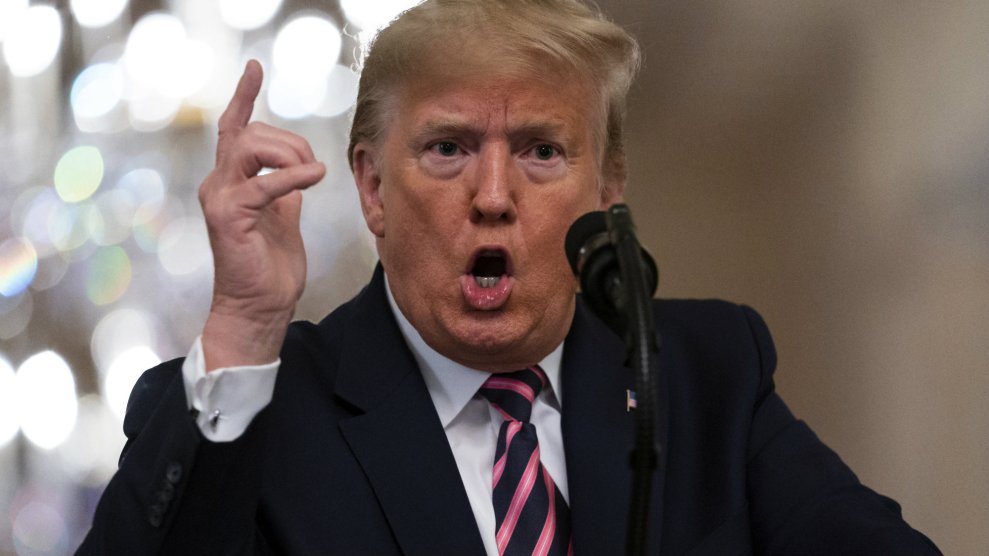 Through the Trump Era, it’s been fashionable for some of his critics—especially on Twitter—to assail his actions as the coming of kleptocracy, autocracy, authoritarianism, and, yes, fascism to the United States. Recently, in an airport, an elderly women stopped me to say that she survived the Holocaust in a camp and now fears she is experiencing what her mother went through eighty-five years ago as the catastrophe approached in Germany. I tried to persuade her that as bad as things are now, there remains institutions, organizations, and millions of people who will not accept what is happening to the nation’s democratic institutions and who can oppose a complete power-grab from Trump and his cult (a.k.a. the Republican Party).

I still believe that. But Trump’s hostile take-over of the Justice Department this week is yet another sign that the task of countering Trump’s extremism is becoming both harder and more crucial.

By now, you know the basics: After the Justice Department requested a seven-to-nine years sentence for Roger Stone, a longtime Trump intimate who was convicted of lying to Congress and witness-tampering (to protect Trump in the Russia scandal), Trump tweet-whined that this sentence would be too harsh, and the DoJ dutifully rescinded it. Four federal prosecutors, apparently in protest, withdrew from the Stone case, with one quitting the department. Then Trump attacked the federal judge handling the case. Still on the rampage the next day, Trump—again in a tweet—threatened to withhold assistance for New York State if it did not smother investigations related to Trump.

On Thursday afternoon, Attorney General Bill Barr seemed to rebuke Trump by saying he would not “be bullied or influenced by anybody,” including the president. But Barr has already done so much of Trump’s bidding—undermining the Special Counsel Robert Mueller’s report, opening investigations that appeared designed to unearth information that support Trump’s favorite conspiracy theories—his declaration of independence was too late, if not ludicrous.

With the impeachment behind him, Trump has been acting like Michael Corleone on steroids, intent on settling all the “family business.”

With the impeachment behind him, Trump has been acting like Michael Corleone on steroids, intent on settling all the “family business.” He sacked impeachment witnesses Lt. Col. Alexander Vindman and Ambassador Gordon Sondland. Next he moved onto the Justice Department and the judiciary. At the same time, Barr set up a special “intake” channel at the department for Trump’s henchman Rudy Giuliani to feed rumors, dirt, and supposed leads about Trump’s rivals.

All this is crooked and horrific. Trump is rigging the justice system, trashing norms that have been in place for decades, and attacking the notion that the rule of law is essential for democratic governance. Early in his presidency, facing the Russia investigation being run by the FBI, Trump exclaimed, “Where is my Roy Cohn?” He was referring to the thuggish mob lawyer who had been red-baiting Sen. Joe McCarthy’s chief hatchet-man years before becoming a mentor and consigliere for the young Trump. Though Trump placed Barr, his own lapdog, in charge of the Justice Department last year, Trump has become his own Roy Cohn, consolidating power and seeking vengeance. And extracting revenge has long been one of Trump’s primary psychological motivations, as I first explained before he was elected president.

But this crusade of revenge does more than just feed Trump’s dark soul. It undermines the safeguards that are supposed to thwart despotic power. During the impeachment trial, Trump’s celebrity lawyer Alan Dershowitz essentially argued that Trump, as president, can get away with any act of corruption that is not a clear violation of federal criminal law. This view is far outside the mainstream of constitutional law, and under it, Trump could, say, pardon the Russian hackers who have been indicted for attacking the 2016 election (to help Trump), signal to them they should stage a repeat in 2020, and still be invulnerable to impeachment. With his unfounded contention, Dershowitz was establishing the theoretical foundation for Trumpism. With these outrageous actions since impeachment, Trump has aimed to fully implement it. The Justice Department, c’est moi.

The Trumpficiation of this crucial part of the executive branch is a literally an abomination of justice in all these individual instances. But Trump’s war on the department and his long-running assault on the FBI (which is part of it) does more than effect the particular cases and matters he targets. It intimidates the whole system.

Imagine an FBI agent, or a Justice Department prosecutor, or an investigator at the Securities and Exchange Commission, or an IRS agent, or a Bureau of Alcohol, Tobacco, Firearms and Explosives official, or you-get-the-picture, who comes across possible wrongdoing that involves Trump, a Trump family member, a Trump company, a Trump business associate, a Trump donor, or a Trump political ally. How much guts would it take for someone in this position that to investigate the matter? How much courage would it take for that person’s supervisors to approve such an investigation? The investigators and the entire agency could face the wrath of a rage-filled president. He could start tweeting about the officers and officials involved. Maybe use their names. Put them in the spotlight. And Fox News, other rightwing media outlets, and an army of trolls would follow suit, digging up dirt on these government officials, looking not only to discredit them but to destroy them.

Who needs that shit? Who can survive it? Anyone in this position only need to think for a moment about FBI officials Peter Strzok and Lisa Page—or to consider the prosecutors in the Stone case. You devote time and energy to doing a tough job, and you end up at best overruled and at the worst pilloried on national television and placed in the line of fire. Your career could be at risk. Your reputation could be shredded. You could receive death threats. Just for doing your job.

As it happened, while I was in line to buy a sandwich for lunch today, two Treasury Department employees said hello to me. One was involved in an office that works with investigations. When I noted my concern that these extreme Trump moves could paralyze people in various federal agencies, one of them said, “Man, that’s the whole damn point. You think we all don’t get it?”

“Man, that’s the whole damn point. You think we all don’t get it?”

Look at the whistleblower who first raised questions about Trump’s attempt to pressure the Ukrainian president to initiate political investigations that benefit Trump. The president and his devotees in Congress and the media mounted a blitzkrieg against this CIA analyst who had followed appropriate procedure and privately reported his concerns to the intelligence community’s inspector general. The whistleblower was crucified by GOPers at the House impeachment hearings. During the impeachment trial, Sen. Rand Paul (R-Ky.), looking to suck up to Trump, displayed a poster with the supposed name of the whistleblower. Trump has repeatedly tweeted about the whistleblower. And the whistleblower and his lawyers have received death threats.

This is the real danger. Trump is not merely interfering in a few incidents that directly interest him. He is creating an environment in which he and his cronies and associates are above and beyond the reach of the law. He has turned the Justice Department into a subsidiary of his political operation. Not only does this protect Trump, it makes it harder for the department to perform other necessary functions.

Barr has placed a welcome sign on his department’s door for foreign governments and intelligence services to intervene in US politics by shoving disinformation into the investigative system of the United States. It’s simple: Slip Giuliani a phony document or a compromised source; he hands that bad information to the Justice Department; and US officials have to spend time and resources chasing the false lead. And here’s the bonus: Someone at the department could leak to the media that it is examining a report that a Democratic candidate once took illegal funds from a Chinese source—whether or not that report has any legitimacy—and, presto, Fox News has an exclusive. Russia, if you’re listening….

These are difficult times. Disinformation is a threat to the fabric of American democracy. Trust in government is low. One party has traded checks and balances for tax cuts and judges. For some, the right to vote is under siege. Trump and his enablers have wrought a slow-burn crisis of democracy. They have perverted the basic foundation taught in every high school civics course: this is a government of laws, not of men and women. (Are there still civics courses?) For Trump, this is a government of Trump, for Trump, and by Trump. And his GOP handmaids and tens of millions of Americans are just fine with it.

Roger Stone is a political sleazebag who for decades has proudly engaged in dirty tricks and slime-ball actions to win elections. He is facing prison time for lying to cover up Trump misconduct in the Russia scandal. (Information produced during Stone’s trial suggested that Trump lied to Mueller, which could be a crime.) But Stone is small potatoes compared to Trump’s overall aim: The president seeks the total sublimation of the Justice Department and the whole US government to his will. If he pulls this off, it will be one more reason for that survivor I met, and anyone else who cares about preserving the rule of law and democratic values, to worry.