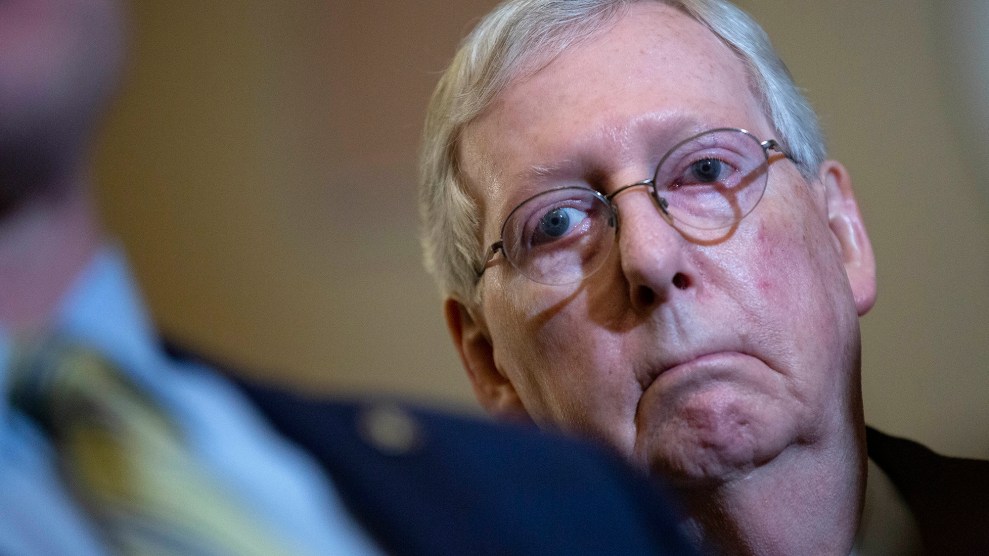 Congressional Democrats are pushing for nationwide access to vote-by-mail and early voting in response to the spread of the coronavirus. And while lawmakers have introduced legislation to address the havoc the pandemic has had and will have on voting, they say that they’re running into the same partisan wall that has blocked related efforts in the past.

“I see no evidence that Majority Leader McConnell has weakened his opposition,” said Sen. Chris Coons (D-Del.) on Monday, highlighting the Kentucky Republican’s past and continuing role as an ardent opponent of federal election legislation efforts. “To be really blunt, that’s partly because voter suppression efforts in a number of states around the country include things like changing the hours, changing the location of polling precincts—and vote-by-mail is a way to work around that or to weaken that as a voter suppression tool.”

“America could be faced with a choice this fall of either Americans being able to vote, which means voting by mail, or not voting at all.”

Coons’s remarks came on a phone call with reporters, where he joined Sens. Amy Klobuchar (D-Minn.) and Ron Wyden (D-Ore.) to discuss a bill they are cosponsoring that would expand early voting and no-excuse absentee vote-by-mail to all states in time for the November elections.

Even against the coronavirus backdrop, the Democratic senators say McConnell is acting in keeping with his history of blocking election security legislation meant to address concerns after Russia’s 2016 interference operations, and his only reluctant agreement to boost some election security funding after a months-long campaign that saw him called “Moscow Mitch.”A spokesperson for McConnell did not respond to a request for comment.

While election-related funding has been incorporated into the Senate’s coronavirus relief package that is still under debate, Klobuchar said that “we want to see a lot more,” than the just “over $100 million” currently contemplated. The Brennan Center has estimated that a robust election-protection plan related to the coronavirus could cost as much as $2 billion to cover ballot printing and procurement, postage, security, staffing, poll workers, and voter-education campaigns. A proposal unveiled by House Speaker Nancy Pelosi (D-Calif.) on Monday called for “billions” in grant funding for states for election administration issues and a national requirements of 15 days of early voting, no-excuse absentee voting, and that registered voters receive ballots in the mail in an emergency.

Advocates of broader access to postal balloting have been pushing the policy for years—Oregon was the first state to adopt all vote-by-mail elections in 1998—but have intensified with the spread of the coronavirus and related edicts banning public gathering. Primary elections have so far been delayed in 13 states, in part over concerns about the health of elderly poll workers.

While Klobuchar said some congressional and state Republicans support new election funding related to the coronavirus, they don’t necessarily back the legislation she, Coons, and Wyden have introduced. To lessen the burden and crowds on Election Day, their bill would require 20 days of early voting and no-excuse vote-by-mail in all states, and ensure the processing of early ballots 14-days ahead of election to avoid delays on election night—a key concern in places like Pennsylvania and Michigan. The bill would also require states to offer downloadable and printable absentee ballots—applying the same security standards that some states use to accommodate overseas military and civilian voters—and charge the Election Assistance Commission with creating a uniform domestic downloadable and absentee ballot that can be used starting in 2022.

While Wyden says McConnell was eventually pressured to increase general federal funding for election security, he characterized the majority leader’s approach of allocating such funding without tying it to specific requirements as “We’ll just spend money and everything will just be taken care of.” Wyden said that in the current context, new money should be tied to requirements that make voting more accessible.

“America could be faced with a choice this fall of either Americans being able to vote, which means voting by mail, or not voting at all,” he said. “That’s not even a close call.”

“At some point democracy should trump these partisan concerns,” Klobuchar said, adding that vote-by-mail, which is widely used in Utah, has never been simply a Democratic-state issue. She said that she’s optimistic that they’ll be able to secure some funding for these efforts, but that they’ll likely “still be fighting Sen. McConnell on the details.”

“No citizen in this country should have to pick between exercising their right to vote and protecting their health,” she said.