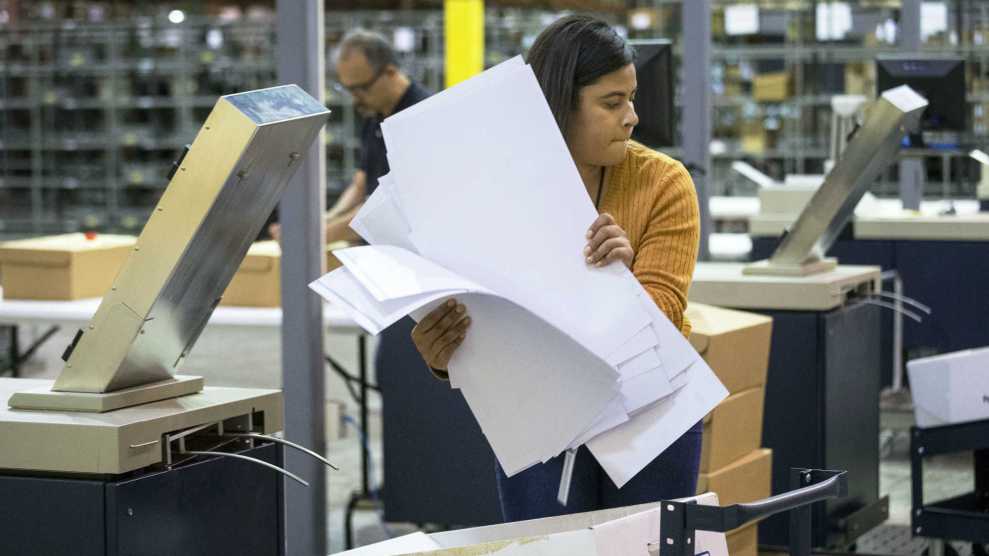 Imagine this: It’s the night of November 3, 2020 and eyeballs across the country are glued to television. As results trickle in, networks begin making calls in the presidential race, filling states red for President Trump or blue for the Democratic ticket.

In 2016, just 80,000 votes in Michigan, Wisconsin, and Pennsylvania gave Trump his electoral college win. Pennsylvania’s 20 electoral votes are the biggest prize among these closely watched swing states, and are widely assumed to be a prerequisite to winning the presidency. And initial results, based on day of votes, suggest a winner. But over the course of the next 24 hours or so, hundreds of thousands of mailed ballots are counted, and the candidate who looked like the victor on election night has fallen behind. That candidate’s supporters—and perhaps the candidate themself—claims foul play or rigging. Chaos ensues.

As things stand, election officials in the state fear Americans could confront this exact hypothetical this fall. As Rick Hasen, an elections administration expert and law professor at the University of California, Irvine, recently told me, its one of his “nightmare scenarios.” New rules this year allow all Pennsylvania residents to request to cast ballots by mail, an opportunity that hundreds of thousands, perhaps millions, of voters will take up. Under existing state law, they cannot be counted, or even opened, until after 8pm on election night, when traditional polling locations close. In a state where Trump topped Hillary Clinton by just 44,292 votes, these ballots could be decisive—and the process could take up to three days.

Pennsylvania’s new rules are part of a sweeping set of election reforms lawmakers enacted after the state settled a 2016 lawsuit filed by Green Party presidential candidate Jill Stein that argued that the state’s then-largely paperless voting system violated voters’ constitutional rights. While the lawsuit focused on introducing paper-backed voting systems, the reforms also included a longer period to register to vote, the elimination of straight-party voting, and new provisions allowing any Pennsylvanian to request a mail in ballot for any reason. Previously, state law only permitted voting by mail for narrower groups—like people with disabilities that would keep them from the polls or those who had a demonstrated need to be outside their home county on Election Day.

While the new rules will go into effect before this year’s April 28 primaries, it’s unclear exactly how many Pennsylvania voters will vote by mail in that election or this fall—when officials anticipate it could be well over a million.

In 2016, there were 6.1 million votes cast in Pennsylvania, 266,208 of which were absentees permitted under the old rules—a rate of about 4 percent. With that small of an amount, the restriction on tallying them before polls closed, put in place out of concerns about maintaining their secrecy, could be overcome within hours. But the numbers will be different this year. Wanda Murren, a spokesperson for Pennsylvania Secretary of State Kathy Boockvar, said that “in an abundance of caution and based on other states’ experience” their office is telling counties to expect that 20 percent of ballots could be cast by mail in November 2020.

“Absent some new change in the law that would give us some additional flexibility here, if the margin is close in Pennsylvania, the idea that we’re going to know exactly who won on election night…that’s likely not to be the case,” says Lee Soltysiak, the chief operations officer of Montgomery County just northwest of Philadelphia.

Soltysiak explains that on election night, after an initial set of numbers come in from polling places and are posted “as we always do,” he’ll be able to announce the number of outstanding absentee and mail-in ballots, which will then have to be centrally opened, scanned, and counted—all after polls close. “Depending on the margin, that may be significant,” he said. Montgomery County, which is the state’s third-most populous, had 22,208 absentee ballots in the 2016 general election; this fall, his preliminary estimates suggest mail in ballots could top 60,000.

County officials are spending hundreds of thousands of dollars to beef up staff and buy extra equipment.

“I’ve seen numbers all over the map, frankly,” he said. “No one’s experienced what we’re all about to experience in 2020.” County election officials like Soltysiak are spending tens of thousands of dollars to beef up staff and buy extra equipment to accommodate the flood of mailed votes, while pushing the state legislature to amend the law as quickly as possible to allow officials to count them before polls close. In other states with robust mail-in balloting, officials regularly begin processing them in advance. Colorado, for instance, allows counting of mailed ballots to begin 15 days before Election Day, with the results remaining secret until polls officially close.

In January, the Philadelphia Inquirer reported that Boockvar said that as long as county officials secured extra staffing, everything was “going to be fine.” County officials almost immediately pushed back, the story noted, expressing doubts the ballots could be counted quickly. Murren told Mother Jones that the Secretary of State’s office “has heard the concerns of the counties” and is “developing guidance” to advise them on how best to handle “significantly more ballots that will need to be counted after the polls close,” along with providing funding for personnel and counting machines. But she agreed that a legislative fix will be required to allow for ballots be opened or counted before polls close. “We wish to emphasize that having an election night count is less important than ensuring every vote is counted accurately,” she said.

For their part, state legislators of both parties say they’re working on it, although they have so far been light on specifics. “We have been reviewing the issues [county officials have] raised and begun work on a legislative solution,” says Jay Costa, Jr., the state senate Democratic leader. “I’m hopeful that we’ll finalize that solution prior to our April 28 primary election.” Mike Straub, spokesman for Pennsylvania House Republicans, says there are “plans to move a bill in the near future to address those concerns,” and that “[w]e all share the goal of conducting fair, accurate and efficient elections in our Commonwealth.”

Matthew Munsey, chair of the Northampton County Democrats, said party activists plan to let people know about the new vote by mail rules, “and we are going to encourage people to take advantage of that option.”

The new law also requires each county store and count mail-in and absentee ballots in one place, leading Munsey to worry about bottlenecks caused by time-consuming challenges targeting mail-in voters’ eligibility. In the past, the smaller number of absentee ballots were opened at local precincts, under a procedure where officials would read the name of the voter and observers—whether representatives of the candidates or the parties—were able to raise objections to a particular voter, for instance if a voter’s signature or address didn’t match the state’s official records.

Murren said that addressing concerns on challenges is issue the state and legislature are trying to work through in designing a system that allows mailed ballots to be counted in advance. But absent such reforms, she pointed out that the new rules expanded access to the lists of absentee and mail-in voters to any requestor—in the past, the information was only given to political parties—suggesting the wider access to to those records ahead of time might speed challenges along and that a centralized counting location could be more efficient.

In anticipation of the increased workload, Montgomery County will spend $325,000 to essentially double the workforce in its central elections office, $75,000 for three additional ballot scanners, and $25,000 for envelope opening equipment. (“If it’s 60,000 ballots, that’s 120,000 envelopes, because it’s a ballot inside of an envelope inside of an envelope,” Soltysiak explained.)

Next door, just north of Philadelphia in Bucks County—the state’s fourth-largest—officials are looking into buying two additional scanners for their central office at $30,000 each, according to Gail Humphrey, the county’s chief clerk, who expects some of that cost will be reimbursed by the state.

While Bucks County had 18,943 absentee ballots in 2016, Humphrey has heard estimates of as many as 100,000 mailed ballots for 2020. She echoes concerns that a lag between the results available on election night and the updated results after such ballots are counted could open the door for the type of disinformation and accusations of “rigged” or “flipped” elections that flew after Democrats in Iowa struggled to complete their count following the state’s caucuses.

“It’s a real fear for us in Bucks County,” she said. “If you have a tightly contested race, it literally could come down to those absentee ballots. And if we don’t know for 24 hours or 48 hours…That is the ultimate concern.” The local Bucks County Courier Times’ editorial board has put the broader issue in stark terms: “No matter who wins, half the country would feel cheated, call the process illegitimate and possibly even refuse to acknowledge the victor as their president. And the other half wouldn’t take that type of commentary lying down. That’s dangerous.”

Munsey says messaging and transparency will be key. “If the results shift because of a good chunk of the votes that hadn’t been counted, the people start to question what really happened.” he said. “If they know [what to expect] ahead of time then they’re not going to be clamoring.”

While Montgomery County’s Soltysiak emphasized that he is “very confident in our election system” and the accuracy of the results it will produce, he agreed that officials need to take special care to clearly communicate the number of outstanding ballots at every stage, and for the press to report the state’s new procedures and election night results responsibly.

“Transparency is going to be critical on this, and restraint on election night, and people’s rush to want to call something, they’re going to need to understand the new dynamic here in Pennsylvania,” he said. “This is not Iowa, we aren’t using apps. We’ve moved to paper and it’s secure and it’s verifiable—but it’s not quick.”