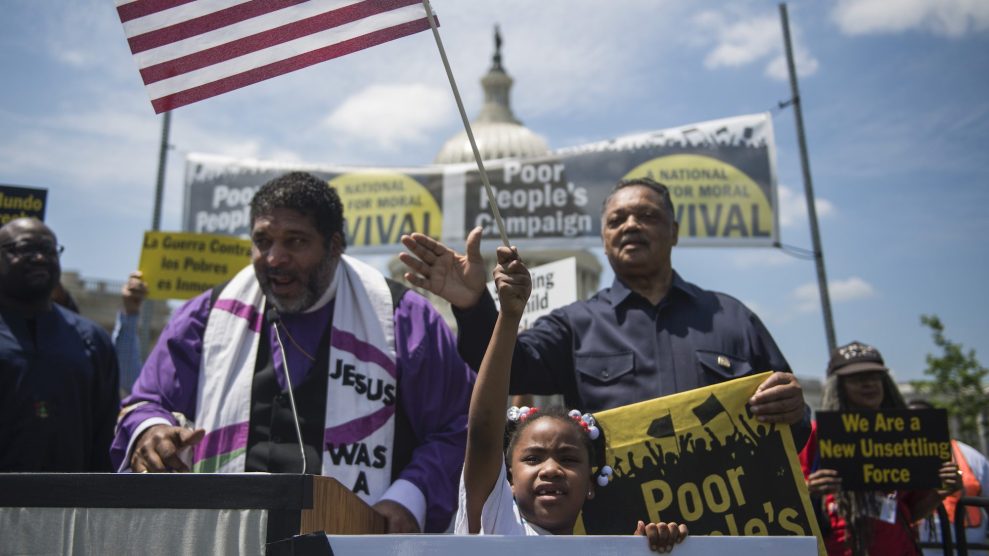 Revs. William Barber, left, Jesse Jackson, and Romiah Shart, attend a rally on the east front lawn of the Capitol with members of the Poor People’s Campaign in May, 2018.Tom Williams/Getty

In 1968, Rev. Martin Luther King Jr. had organized a massive march for racial and economic justice to take place over several weeks in Washington, DC. He never lived to see it happen; a month before it was scheduled to take place, he was assassinated. But Rev. Ralph Abernathy, who was the head of the Southern Christian Leadership Conference, took over with King’s widow, Coretta Scott King. Beginning on May 10, and reaching 50,000 on June 19, thousands of marchers from all over the country gathered in the Nation’s Capitol for the Poor People’s Campaign, demanding social justice and an Economic Bill of Rights.

This Saturday, there will be another Poor People’s Campaign demonstration, one that was intended by its organizers to be the modern day revival of the 1968 march. They envisioned hundreds of thousands of people would converge on Washington for a historic march for racial and economic justice. As different as the historical moment is, there are many similarities to 1968: public frustration with institutional violence affecting racial minorities, divisive political culture, and the seemingly intractable crisis of poverty.

But because of the pandemic, the demonstration has been forced to change its plans. Instead of a traditional march, with buses arriving from all over the country, downtown Washington filled with marchers, and speakers in front of the Capitol building, Washington Monument, or Lincoln memorial, it will be digitized and decentralized. The novel coronavirus continues to threaten millions, and Black people have died at disproportionately higher rates than others. Nationwide protests against the death of George Floyd and other Black people at the hands of police, however, underscores that the original message of the Poor People’s Campaign has remained unchanged from the one from 52 years ago. With these two forces at work, march organizers had to figure out what to do.

“These issues are heightened even more,” says Pastor Alvin Jackson, executive director of the campaign’s march on Washington. “They reveal the fissures in our society. There were wounds there all the time—and they’re increased and heightened with the virus and things brought to light around police brutality. It’s changed [the message] some, but also heightened and helped us to sharpen our focus.”

“There were wounds there all the time—and they’re increased and heightened with the virus and things brought to light around police brutality. It’s changed [the message] some, but also heightened and helped us to sharpen our focus.”

Since the 1968 march, income inequality has grown even more extreme with the gap between the richest Americans and the poorest more than doubling since 1989. Meanwhile, programs from the Johnson administration’s war on poverty, like the expansion of food stamps and public early education, have been systematically defunded.

Rev. William J. Barber II is the co-founder of the current iteration of the Poor People’s Campaign and president of Repairers of the Breach—an organization that advocates for the underserved and anchors the campaign with the New York City-based social justice group Kairos Center. They decided in 2017 to revitalize the 1968 crusade to bring attention to the tremendous voting and economic power of poor people in this country. But the catastrophic events of this year have forced planners to reconsider their original plans.

Barber is no stranger to activism. For more than a decade, he served as president of the NAACP of North Carolina. In 2013, he initiated Moral Mondays, a series of protests against the state’s general assembly—over partisan gerrymandering and the assault on voting rights, healthcare access, and environmental protection, among other things—which spread across the state, sometimes bringing tens of thousands of demonstrators. “This is a fight for the future and soul of our state,” he said during a February, 2014 speech. “It doesn’t matter what the critics call us…because they can’t debate us on the issue. They can’t make their case on moral and constitutional grounds.”

Five years later, he brought the Poor People’s Campaign back to life, starting with a thousands-large DC protest in April, 2018. On the first day of protests, he was arrested. “We know that in the richest country in the world, there is no reason for children to go hungry, for the sick to be denied health care and for citizens to have their votes suppressed,” he said at the time. Two years later, another DC protest was supposed to be a watershed moment for the movement.

Preparations for the DC march were more than a year in the making. The campaign had been on a 25-state tour since 2019, during which leaders like Barber and Jackson met the underserved in their own communities and held voter registration drives and demonstrated at state capitols. With a particular focus on the South, they began the tour in El Paso, Texas, in September, partially in response to the mass shooting there last August. They had planned for demonstrations to culminate in a massive march on DC this month.

“We were making all kinds of plans with staging and infrastructure on Pennsylvania Avenue in DC and getting hotel rooms,” Jackson says. They estimated up to 500,000 people would attend. But, by mid-March, it became clear that the pandemic would make such a mass gathering impossible. Instead, there will be a two-and-a-half-hour event on Saturday morning, which will air on MSNBC and feature segments with many of the same speakers who were originally slated to appear. “Poor and low wealth people,” said Jackson. “Entertainers, influencers like Jane Fonda, Al Gore, and Killer Mike.”

The campaign focuses on five themes as key examples of injustice in modern society: systemic racism, economic inequality, ecological devastation, militarism, and religious nationalism. The prevalence of these concerns have been further underscored by COVID-19, George Floyd, the often overt racism of President Donald Trump, and the economic crisis. “It’s interesting that this is all coming together at this moment,” Jackson says. “We’re not surprised about it, and we’ve been thinking about how can we use this moment to continue to build the movement and momentum for change in this country, because that’s really the work—changing the narrative about building power and moving the country forward.”

“That’s really the work—changing the narrative about building power and moving the country forward.”

Rev. Rob Stephens, national political director at Repairers of the Breach, says organizers have emphasized the importance of local centers of power since planning began three years ago. Over the last year, 200 partner organizations participated in demonstrations in 46 states. “We’re pooling testimony from people across the country,” Stephens says. “What is powerful about Saturday is that you can see people in their own communities talking about their stories [from] community centers, churches, temples…In some instances, I doubt that all of them could have made it to Washington in person.”

But historically, a large element of a protest’s impact is tied to its physical presence, which was dramatic in 1968. George Washington University history professor Gordon Mantler, the author of Power to the Poor: Black-Brown Coalition and the Fight for Economic Justice, 1960-1974, told me the original plan was that “an army of the poor would come to Washington in spring of 1968 and demand a rededication to the war on poverty.” As part of the demonstrations, 3,000 marchers set up a plywood town—a place that became known as Resurrection City—on the National Mall and camped there for six weeks. “The president stayed away, but a number of cabinet secretaries talked with and met protesters,” Mantler explains. Though some of the fundamental economic policies designed to alleviate poverty were never passed, the campaign did lead to the expansion of food assistance by the federal government to the 1,000 poorest counties in America.

Social media and the digital age may have made this protest possible this year, but given the drama of the recent racial justice protests following the death of George Floyd, organizers appreciate that it will be difficult to offer a similar sense of urgency. “That’s a challenge with a virtual march,” Mantler says. But, he points out, given the values of the Trump administration and the Republican Senate, the fight to alleviate poverty might be more effective on the state level.

The Trump Administration is not the Johnson Administration, Mantler notes, which, for all its faults, did declare a war on poverty and was responsible for the Voting Rights Act. While those efforts were overwhelmed by the conflict in Vietnam, the current Republican leadership, “doesn’t particularly care about inequality or poverty.” The 2020 version of the campaign, with its tour of states and coordination with dozens of smaller partners, has become a local affair. “The modern campaign has always been a little more diffuse in, ‘who do we target in power?’ So the virtual march may achieve some success because it is not just about being in DC,” he says. “It never has been.”

For more on the Poor People’s Campaign, listen to Mother Jones’ podcast 2018 interview with Rev. William Barber II below: