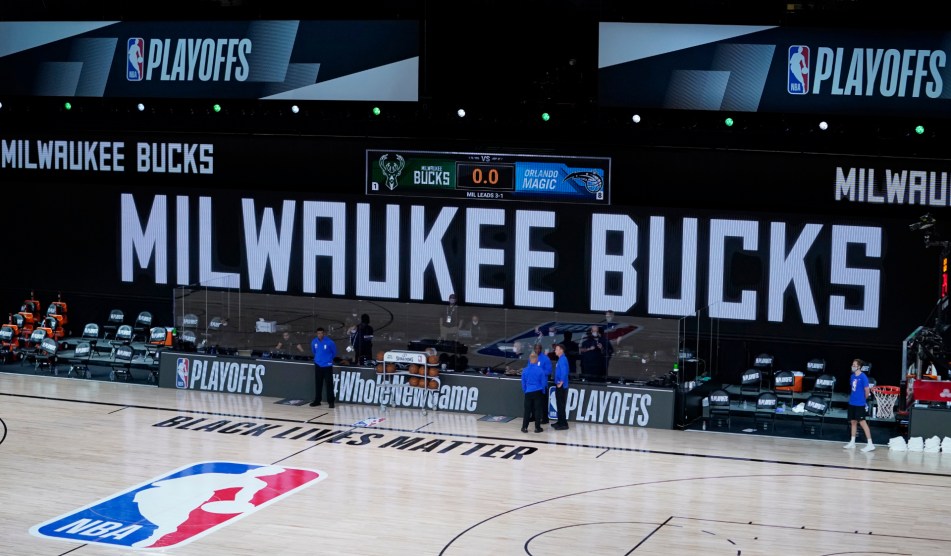 The players of the Milwaukee Bucks, an NBA team headquartered only an hour’s drive from Kenosha, Wisconsin, staged what by all rights was a strike today over the shooting of Jacob Blake by Kenosha police. The players of five other teams soon joined them, meaning that all three of tonight’s playoff games had to be postponed. ESPN and others have called it a boycott, but that’s not right. Workers came together to withdraw their labor power. It’s a strike.

Specifically, it’s a wildcat strike: a work stoppage without union approval. This was something new in America, or something old in newer form—a radical expression of solidarity among predominantly Black workers that seemed to spread by the minute beyond their workplace.

Sterling Brown and George Hill make a statement for the @Bucks without taking questions. pic.twitter.com/iuxOhu6Ge0

In Major League Baseball, the Milwaukee Brewers and the Cincinnati Reds—the players, that is—were canceling their game. Kenny Smith, a studio analyst on TNT and former NBA player, walked off the set of the NBA on TNT in solidarity with the players:

Kenny The Jet Smith just walked out of NBA on TNT studios in solidarity with NBA players pic.twitter.com/XR4Y5yBE5z

On NBA TV, Isiah Thomas was delivering a seminar on the double consciousness and the social construction of race. Sam Mitchell spoke warmly of solidarity, among other things. WNBA players, who have been assertive and unflinching in their activism since the killing of George Floyd, pushed the league to postpone three games (some walked into the arena with Blake’s name on their shirts). Major League Soccer players postponed their games. Naomi Osaka pulled out of a tennis match. At some point, the Bucks players got on the phone with political power players in Wisconsin, demanding something be done.

Inside the locker room, the Milwaukee Bucks were on a conference call with Wisconsin Attorney General Josh Kaul and Lieutenant Governor Mandela Barnes, sources tell ESPN.

Dismiss this at your peril as the indulgence of well-compensated cultural figures. A labor action taken by a handful of basketball players spread quickly in various forms across the culture. It is sure to spread still farther. By stopping play—something several players pushed for as the NBA’s “bubble” was being put together in Orlando—all attention returns to the streets. There have been times, as scholars have noted, that sports were used along with other entertainment baubles to quell uprisings. But not today.

Update: The Lakers and Clippers joined the strike, according to reports.

Sources: The Lakers and Clippers have voted to boycott the NBA season. Most other teams voted to continue. LeBron James has exited the meeting.