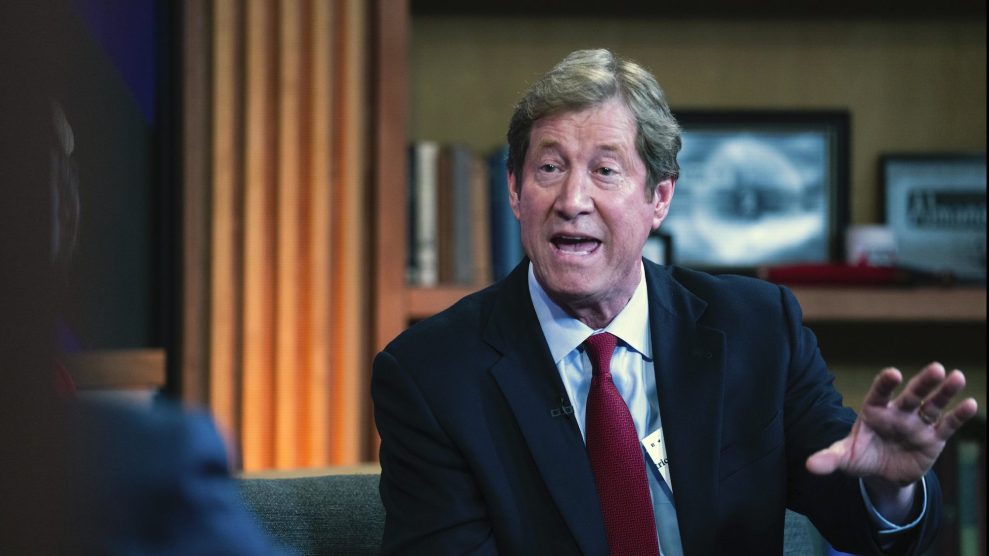 Before launching his 2020 campaign to become a Minnesota senator, Jason Lewis spent more than two decades as a conservative broadcaster. While in 2016 he parlayed his media perch into a single term as GOP congressman for the state’s second district, covering suburban tracts south of Minneapolis, his true career has been as a “conservative bomb-thrower” rousing and exciting a radio audience. His less-noticed television work centers on his time as the right leaning co-host on a Crossfire-style talk show that aired in the mid-‘90s and early ‘00s. In recently surfaced footage of an episode from 1999, Lewis casts doubt on the need for hate crime statutes in dismissive tones, at one point describing the hypothetical burning of a cross in a Black couple’s lawn as “trespassing.”

During the April 1999 episode of the Sunday morning show, Face to Face, Lewis—who is challenging incumbent Democrat Sen. Tina Smith this November—railed against legislation introduced in the state senate that would expand Minnesota’s existing hate crime statue. At the time of taping, only a few offenses, like assault, were eligible for prosecution in the state as hate crimes. The bill would have widened the pool to include more than a dozen other crimes, including trespassing or interference with religious observance. Richard Cohen, a Democratic state senator who introduced the measure, appeared on the show to promote it.

In his recent campaign, Lewis has positioned himself as a staunch Trump ally and Minnesota GOP notable. In April, he pushed for Minnesota’s reopening, declaring on Twitter that the state was “being held hostage.” But two decades ago, Lewis’ meaningful connection to the public came through his weekly Face to Face appearances and as a regular host on local radio. To kick off the 1999 episode on hate crimes, he asked them through the camera, “Do you know what a hate crime is? If you do, you’re one up on me, because I don’t.”

It’s likely most viewers were abundantly clear on the definition. Months earlier, on October 7, 1998, the unconscious body of a University of Wyoming student named Matthew Shepard had been found tied to a fence post on the prairie, nearly mistaken for a scarecrow by the mountain biker who came upon him. Shepard, who was gay, had been tortured and left for dead after being last seen leaving a nearby bar. He lived another week before dying in the hospital. The brutal incident forced a national reassessment of public attitudes toward the gay community, and prompted wide consideration of expanded hate crimes legislation. The next year, Minnesota state senator Richard Cohen introduced his law. As he introduced Cohen onto the show, Lewis referenced Shepard death, before slipping in a dismissive joke. “Ever since the tragic death of Matthew Shepard in Wyoming, the gay student who was killed brutally, talk of hate crime is in the air.  Should we have extra penalties for those crimes that are motivated by hate? As opposed to love perhaps?”

After Cohen explained the details of his bill to the audience, he listed the categories of identity used for defining hate crime victims: race, color, religion, sex, sexual orientation, disability, national origin. Lewis became more bellicose. “So gender’s in there, right?” he asked, attempting to set up a gotcha moment. “So rape could become a hate crime?” Seemingly uncertain on how to respond, Cohen said, “Well, I guess I would disagree…rape is not one of the crimes we specify.” At one point businessman Vance Opperman, the liberal co-host, asked Lewis if burning a cross in a Black family’s lawn shouldn’t be considered a hate crime, as Cohen’s bill would clarify. Lewis responded, “That’s trespassing!”

“You are absolutely insulting…This is no way for anybody to run an interview.”

Even on Face to Face, Lewis was known to push the envelope in other instances. As CNN reported last month, in another 1999 episode, Lewis deplored a recent court ruling that allowed the families of students suffering from sexual assault to sue schools for improperly protecting them. “This is such a boon to lawyers everywhere, they can sue school districts for not preventing Billy from teasing Susie,” Lewis said on the episode. In spring of 2012, while hosting a program on Genesis Communications Radio Network—also home to rightwing firebrand Alex Jones—Lewis’s interview style prompted his guest, former Senator Arlen Specter (R-Pa.), to hang up, ending his interview by saying “You are absolutely insulting…This is no way for anybody to run an interview.” Lewis also dabbled in social media start ups, founding a members-only platform called Galt.io in 2013 that would later be be embroiled in controversy for hosting a pro-Hitler documentary on its message boards, according Buzzfeed News.

In an email response to questions about Lewis’ current stance on hate crimes, campaign spokeswoman Christine Snell told Mother Jones, “[N]eedless to say Congressman Lewis condemns hate and hate crimes in all their forms, including attacking police because of their profession and supports making that a hate crime as well.”