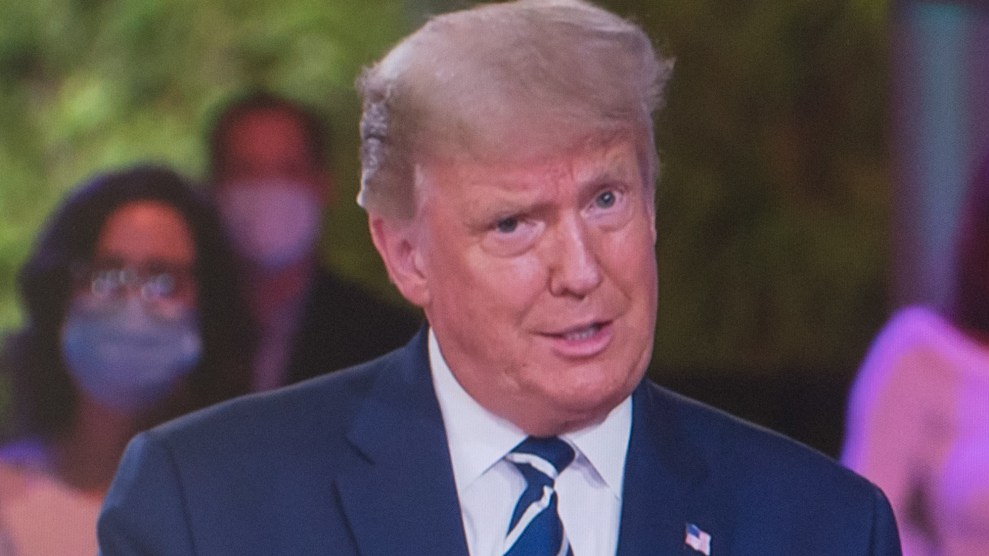 About 10 minutes into President Trump’s town hall Thursday night in Miami, NBC News’ Savannah Guthrie asked him a fairly straightforward question about QAnon, the right-wing conspiracy which, as my colleague Ali Breland has explained, “postulates that President Donald Trump is on the verge of arresting a throng of liberal elites for facilitating and participating in a sprawling child sex ring.”

Trump has retweeted QAnon supporters in the past, praised a high-profile QAnon believer in her campaign for Congress, and just this week shared a Q-adjacent conspiracy that Osama bin Laden is still alive and Navy SEALs had killed a body double instead. (Read that last clause again.) When asked about QAnon in the past, Trump has demurred, saying, “I’ve heard these are people that love our country” but “I don’t know really anything about it other than they do supposedly like me.”

One can imagine a world where a very busy president who doesn’t spend a lot of time online might, at one point, not have known about QAnon. It is harder to accept that was ever the case with the most online president in American history. It is harder still to accept after he was asked about it and then spent several months amplifying it. At this point, the feigned ignorance is a statement, and Guthrie, by drilling down on it, forced Trump into a painful and deeply revealing exchange.

“Let me ask you about QAnon,” she said. “It is this theory that Democrats are a satanic pedophile ring and that you are the savior of that. Now can you just state once and for all that that is just complete not true and disavow QAnon in its entirety?”

“I know nothing about QAnon,” Trump said.

“I just told you,” Guthrie said.

“They believe it is a satanic cult run by the Deep State,” Guthrie said.

Trump, talking over Guthrie, tried to change the subject to Antifa. But the NBC anchor brought him back to the subject: “Why not just say it’s crazy and not true.”

“You do know,” Guthrie said.

“No, I don’t know,” Trump said. But he went on: “[L]et me just tell you, what I do hear about it, is they are very strongly against pedophilia. And I agree with that. I mean I do agree with that!”

“Okay, but there’s not a satanic pedophile cult,” Guthrie said.

“You don’t know that?” Guthrie asked, one last time.

Trump is so afraid to denounce an unhinged conspiracy (which has been linked to several acts of violence) that he has left open the possibility that there is a Satanic pedophilia cult running wild in his own government. Such a development, if true, would at least put the problems at the post office in perspective. It is of course not true, and in his fumbling on Thursday, Trump once more laid bare that the only thing he has less control of than his supporters is his campaign messaging.