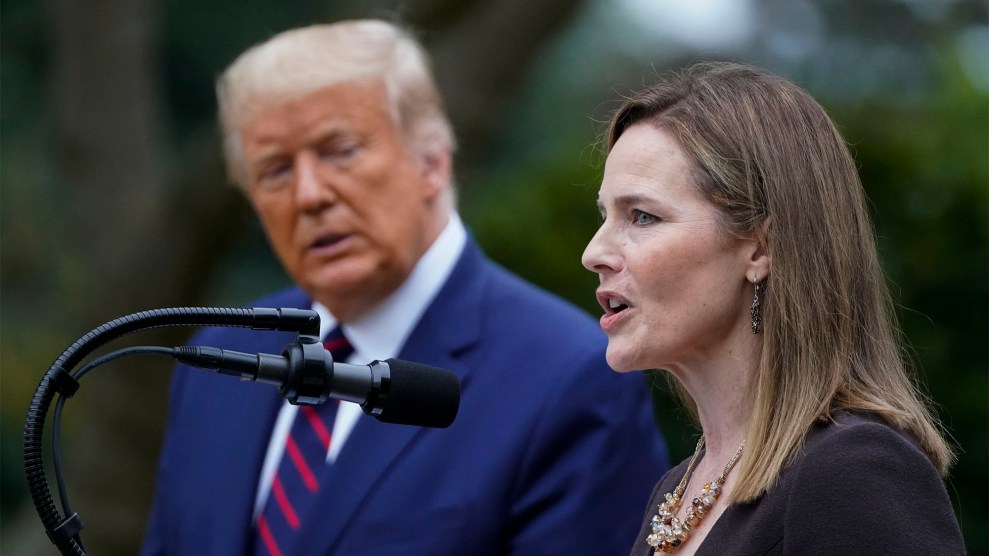 Judge Amy Coney Barrett speaks as President Trump announces her nomination for the Supreme Court in the Rose Garden of the White House on Sept. 26, 2020. Jabin Botsford/The Washington Post/Getty Images

President Donald Trump has said he wants the Supreme Court to intervene on his behalf in any post-election dispute over the counting of ballots. “I’m counting on them to look at the ballots, definitely,” he said at the first presidential debate. And he wants Amy Coney Barrett swiftly confirmed before the election to ensure such an outcome. “I think this will end up in the Supreme Court,” he said on September 23. “And I think it’s very important that we have nine justices.”

Given Trump’s slide in the polls, a replay of 2000’s Bush v. Gore debacle could be the only way he wins. It’s not hard to imagine the court once again installing a Republican president; indeed, a number of conservative justices are steeped in this history. Justices John Roberts and Brett Kavanaugh worked on George W. Bush’s legal team during the 2000 Florida recount and successfully intervened to stop Democratic ballots from being counted. If confirmed, Barrett would be a third justice who worked for Republicans during the Florida recount, increasing the likelihood that the court, with a 6-3 conservative majority, would side with Trump in a post-election dispute, even if the facts and the law aren’t on the president’s side.

On her questionnaire for the Senate Judiciary Committee, Barrett said she “provided research and briefing assistance” on Bush v. Gore as a young associate with Miller, Cassidy, Larroca & Lewin. (The firm later merged with Baker Botts, run by longtime GOP powerbroker James Baker, who oversaw the recount for Bush.) “I worked on the case on location in Florida for about a week at the outset of the litigation,” she wrote.

Barrett said she worked in Florida with Stuart Levey, a partner at the firm who is now head of the Libra Association, a cryptocurrency organization started by Facebook. According to court records and interviews with lawyers involved in the 2000 recount, Levey and Barrett worked not just on Bush v. Gore but on two little-known but pivotal related cases during the recount. In those cases, Republicans sought to count mail ballots that were disputed by Democrats because of evidence that Republican operatives had altered incomplete absentee ballot request forms. That position stands in sharp contrast to Trump’s current assault on mail voting. But there’s a certain consistency here: Republicans will take whatever stance on mail ballots maximizes their electoral chances. And Barrett’s work in 2000 suggests she might be willing to play along.

In the run-up to the 2000 election, Republicans in Florida made a big push for mail voting and sent absentee ballot request forms to Republican voters “from the desk of Governor Jeb Bush,” urging them to vote “from the comfort of your own house”—a process that Trump has decried. Because of a printing error, GOP voters in two Republican counties, Martin and Seminole, submitted absentee ballot requests that lacked required voter identification numbers. These incomplete request forms should have been discarded according to Florida law, but the Republican supervisors of elections in the two counties illegally allowed operatives with the Florida GOP to correct the forms so that Republican voters would receive their ballots.

Republicans will take whatever stance on mail ballots maximizes their electoral chances. And Barrett’s work in 2000 suggests she might be willing to play along.

Officials with the Florida Republican Party were given office space at the supervisor of elections office in Seminole County to fix the forms, and in Martin County, a Republican official was allowed to take the incomplete ballots from the office, fill in the missing information, and then return them without any supervision. Democrats were given no chance to fix problems with their forms. This allowed Republicans to send 2,000 absentee ballots in Seminole County and nearly 700 in Martin County to GOP voters who otherwise would not have received a ballot.

After the election, Democrats sued and sought to invalidate all 25,000 absentee ballots cast in the two Bush-friendly counties because they weren’t able to track which request forms had been changed. “These people were not entitled to ballots based on their applications,” says Edward Stafman, a lawyer who filed the legal challenge. “They only got them because they were Republicans.”

If the ballots had been thrown out, Al Gore would have easily overcome his 537-vote deficit to Bush. “This was 25,000 votes,” says Daryl Bristow, a lawyer from Baker Botts in Houston who represented the Bush-Cheney campaign in the two counties. “If we had lost those cases, we would’ve lost the presidency.”

Levey, Barrett’s partner, appeared on legal briefs for the Bush-Cheney campaign in both cases, and Bristow remembers Barrett working on them as well. As a young associate who had previously clerked for Justice Antonin Scalia, “she was probably doing briefing work with regard to the various motions we were filing and legal arguments we were making,” Bristow says. (Levey declined a request to comment. The White House also had no comment on Barrett’s behalf.)

On the same day as the Bush v. Gore decision, the Florida Supreme Court ruled in favor of Bush in Martin and Seminole counties. The lower court opinions, affirmed by the state Supreme Court, found that allowing Republican operatives to fill in missing information on absentee ballot request forms “offered an opportunity for fraud and created the appearance of partisan favoritism on the part of the supervisor of elections.” However, “despite these irregularities, the sanctity of the ballot and the integrity of the election were not affected.”

The Trump campaign has taken the opposite position in litigation this year, successfully convincing a court to throw out 150,000 absentee ballot requests in Iowa after local election officials filled out identification numbers for voters—the very thing that Republicans did in Florida in 2000. “Today’s Republicans don’t seem to have any problem with reversing positions when it suits them,” says Barry Richard, a lawyer in Tallahassee who represented the Bush-Cheney campaign during the recount.

Barrett’s legal work in Florida shows the lengths Republicans will go to in order to elevate politics over the law when it suits their interests and to ignore evidence of fraud or improprieties when it benefits their party’s vote count.

Barrett has decided few voting rights cases since then as a judge, but the opinions she has issued illustrate a hostile view toward expanding access to the ballot. In 2019, she dissented from an opinion by two Reagan-appointed judges on the 7th Circuit Court of Appeals upholding a Wisconsin law preventing people with felony convictions from owning a gun. Her argument was an unusual one: The Second Amendment carries more weight than the 14th Amendment, which guarantees all citizens equal protection under the law. “Felon disenfranchisement laws have a long history, and the Fourteenth Amendment’s protection of the right to vote expressly acknowledges the authority of state legislatures to enact such laws,” Barrett wrote. “The Second Amendment contains no similar acknowledgement.”

A 6-3 conservative majority with Barrett on the court could be a disaster for voting rights, potentially killing what’s left of the Voting Rights Act, upholding even more extreme gerrymandering, and giving a green light to virtually any effort by Republicans to make it harder to vote.

And if Barrett’s past work in Florida is any indication, she may be inclined to side with GOP interests in any dispute over how ballots should be counted, no matter what the law—or the GOP’s past support for voting by mail—has to say.