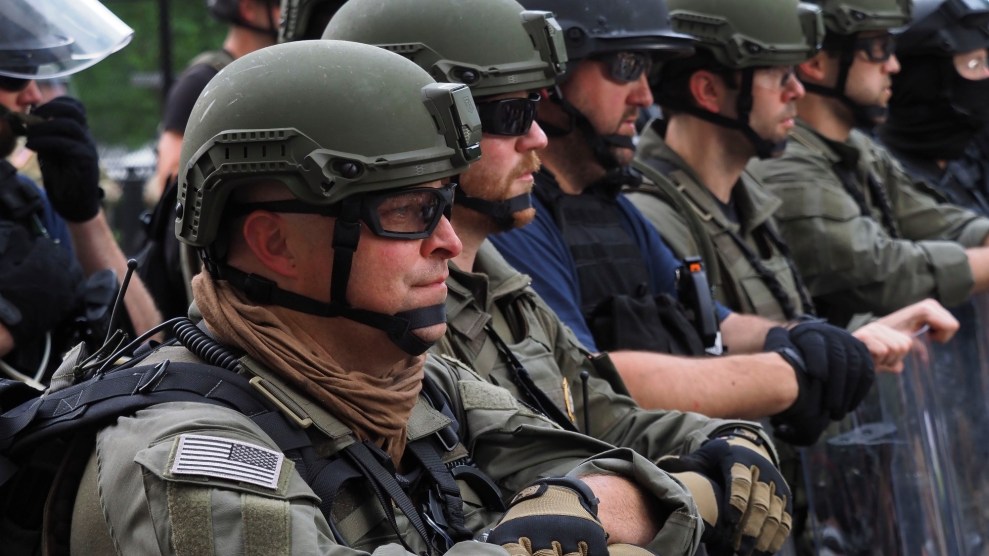 Congress is set to approve a defense policy bill that bars unidentified federal law enforcement officers from policing protests. The bill responds to a phenomenon that Mother Jones flagged in June: Unidentified federal law enforcement officers with no identifying insignia joined in the Trump administration’s coordinated crackdown on protests against police violence in several cities earlier this summer.

The 4,500-page annual defense policy bill that emerged from a House-Senate policy committee Thursday requires any armed forces personnel, including National Guard members, and federal law enforcement agents who respond to a “civil disturbance,” to display either their name or some other “individual identifier,” as well as the organization or branch of the Armed Forces for whom they work.

This provision is a direct response to the presence in multiple cities of unidentified federal officers last summer. I first reported on this issue on June 3 during a protest in Washington. Agents I approached would only say that they worked for the “Department of Justice” or the “federal government.” Other reporters elicited similar responses.

Asked who they’re with, these guys say only that they’re with “The Department of Justice.” pic.twitter.com/ciVDtP8ndk

The Justice Department later acknowledged that the agents I talked to were from the Bureau of Prisons—federal prison guards, in other words. The agents were from special “riot control” teams dispatched to DC along with many other federal agents as part of a show of force ordered up by Trump and Attorney General Bill Barr in response to one night of looting and vandalism in downtown DC amid largely peaceful mass protests that followed the May 25 killing of George Floyd in Minneapolis.

In July, the Trump administration deployed more unidentified agents as part of a large federal response to protests around a federal courthouse in Portland, Oregon. In Portland agents in unmarked, rented minivans emerged and detained protesters without identifying themselves. Customs and Border Protection later told Mother Jones that its agents had carried out the arrests in Portland.

Militarized Federal Agents from a patchwork of outside agencies have begun policing Portland (in rented minivans vans) without the explicit approval of the mayor, the state, or local municipalities. This is what that looks like in practice: pic.twitter.com/losap4SsgI

The provision in the defense bill, which is drawn from a bill offered by senators Chris Murphy (D-Conn.) and Chuck Schumer (D-N.Y.), would bar such conduct.

“President Trump and Attorney General Bill Barr deployed an army of unidentifiable federal officers in riot gear to crackdown on peaceful demonstrators exercising their constitutional rights across the country and treated American citizens like they were an enemy,” Schumer said in a statement Thursday. “The legislation Sen. Murphy and I worked to include in the NDAA puts an end to this abuse of power and ensures that federal law enforcement is transparent, identifiable, and accountable.”

The measure in defense bill is not as strong as the language Murphy and Schumer introduced. It no longer mandates that the names of officers be displayed, instead allowing other identifiers like badge numbers. And it includes an exception for federal officers who don’t normally wear uniforms or who are working undercover.

Murphy said in tweets Thursday night that these changes reflected normal compromises required to get a proposal into law. A Senate aide said the alternations responded to “feedback from the federal law enforcement community.”

2/ I did have to compromise. The final provision isn’t a strong as my original text. But it’s still damn strong and the practical effect of my proposal isn’t changed – federal law enforcement will no longer be able to hide their identity when doing crowd control.

Defense policy bills, unlike most legislation, pass every year. As a result they are routinely stuffed with policy reforms, both large and small, including many with limited links to defense. This year’s bill also includes legislation requiring shell companies in the US to report their ultimate owner to the Treasury Department, a step aimed at cracking down on money laundering.

Trump has threatened to veto the defense bill unless lawmakers add a provision repealing a law that protects social media companies from liability over content posted by users. That threat appears to be a fit of pique based on Twitter and Facebook labeling Trump’s false claims about his election loss as contested. It may also reflect Trump’s misunderstanding of the law: the change he wants would not prevent social media firms from labeling his posts. Trump previously threatened to veto the bill over a provision in it requiring the removal of Confederate leaders’ names from military bases.

But the House and Senate are set in coming days to pass the bill with veto-proof majorities. That means they can override Trump’s veto if he exercises it.