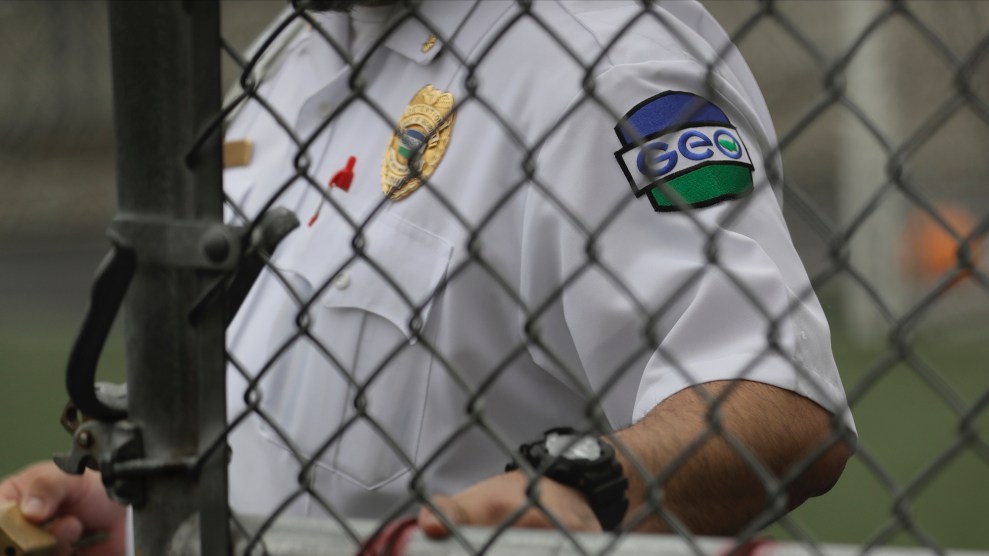 In 2019, Wilfred requested protection from political persecution at a California border crossing because he saw the United States as a beacon of hope. Instead, Wilfred, an African asylum seeker who asked to be identified by a pseudonym to protect associates in his home country from retaliation, wound up at a Mississippi immigration detention center with practices that he compared to the slave trade. Prison officials told detainees to walk with their hands behind their back, avoid eye contact with their jailers, and speak only when spoken to.

After Mississippi, Immigration and Customs Enforcement sent Wilfred to Louisiana, where he used his training as a lawyer to help fellow detainees fight their cases. In what he says was retaliation for his lawyering, ICE moved him to the Allen Parish jail, another Louisiana detention center that he called “hell itself.” Upon arriving, he recalled an assistant warden, who was white, telling him, “I hear you’re the trouble maker. If you try to create trouble for me here, I’ll shoot you.”

Wilfred’s experience—the indefinite detention, the trauma it caused, and the money prison companies made in the process—encapsulates the detention system President Joe Biden has taken over. The Trump administration took the already large detention network operated by ICE and pushed it to record size by opening more than 40 new detention centers. But during the pandemic, detention levels fell to the lowest in decades, largely due to a Trump administration policy of summarily expelling people at the border. It means that Biden has taken office with roughly 15,000 people in detention, down from an all-time high of more than 55,000 in the summer of 2019 and about 41,000 in November 2016.

On Tuesday, Biden issued an executive order that directed the Justice Department to phase out its use of private prisons, but the order does not apply to ICE. The Biden administration is considering issuing a similar order to cover immigration detention, but has no immediate plans to do so and some immigrant advocates doubt it ever will, Politico reported. Silky Shah, the executive director of Detention Watch Network, said in a statement that her organization was encouraged by Tuesday’s executive order. But, Shah added, the “Biden administration must now address the private prison industry’s toxic relationship with the Department of Homeland Security,” which oversees ICE.

Margo Schlanger, a law professor at the University of Michigan who led the Department of Homeland Security’s civil rights and civil liberties division during the Obama administration, hopes that Biden will count all detention centers operated by prison companies as for-profit, regardless of whether they’re owned by ICE or local jurisdictions. That would commit his administration to eliminating most of ICE’s detention capacity. As of January 2020, Eunice Cho, a senior staff attorney at the ACLU’s National Prison Project, says ICE was holding 81 percent of all detainees at facilities owned or operated by for-profit companies. (The White House did not respond to a request for comment about what it considers to be for-profit detention centers.)

Should this policy be enacted, the result would be that essentially the only ICE detention centers that would remain would be local jails—which tend to be as bad as or worse than the for-profit detention centers. (The Allen Parish jail that Wilfred called “hell itself” is one of them.) Like private prisons, they’re cash cows. But instead of funneling money to shareholders, they prop up cash-strapped towns and sheriffs’ offices that ICE often pays around $60 per day per detainee. Schlanger knows the problems with local jails but says the main priority right now is to reduce the number of immigrants in detention. Pressuring Biden to stop using for-profit detention centers makes sense as a strategy because he’s already committed to it.

Should for-profit detention be eliminated, the question could quickly become where to hold the people who remain detained. Other than abolishing detention altogether, which the Biden administration has shown no intention of doing, the options would be to keep using local jails or come up with a new form of detention that isn’t for-profit. That could mean repurposing community colleges or halfway houses to hold immigrants, according to a former ICE official, who spoke on condition of anonymity. People at those facilities wouldn’t be free, but they wouldn’t be in jails built to hold a criminal population.

Many immigrant advocates, who often favor eliminating ICE detention entirely, would oppose this kind of shift. As Schlanger put it, “I don’t think the advocacy community is very interested right now in taking one huge system of detention and substituting another system of detention.” Sarah Gardiner, the policy director at Freedom for Immigrants, framed Biden’s campaign promise to end for-profit detention as a “critical first step” toward her group’s ultimate goal of detention abolition.

Adding to the challenges for the Biden administration is that the number of immigrants in detention mostly plummeted in 2020 because the Trump administration largely sealed off the border during the pandemic. The order from the Centers for Disease Control and Prevention, ostensibly to combat the coronavirus, causes border crossers to be summarily removed from the country before they even have a chance to enter ICE custody or to request asylum. The Biden administration has signaled that initially it will keep the CDC order in place to avoid a sudden increase in the number of people arriving at the border, but will presumably end the draconian policy at some point. Once it does, people will start entering ICE custody instead of being immediately expelled, and the numbers of people in detention could quickly balloon unless the agency releases more people on bond or parole than they did under Trump.

John Sandweg, who led ICE under Obama, disagrees with advocates who favor getting rid of immigration detention. But he supports ICE taking a more risk-based and individualized approach under which only people deemed a threat to public safety or a flight risk remain detained. “I think we would find that ICE’s detention needs are probably in the 12,000 range,” he says, “and nowhere near the 30 to 35,000 range.”

The Biden administration doesn’t have to wait to take this approach. Cho points out that ICE can quickly review the status of everyone in custody with the presumption that people should be released, thereby flipping the current approach under which the burden is on people in detention to show that they should be released. Beyond that, Cho says ICE could eliminate use of the cash bonds that can be prohibitively expensive. Adopting those changes would help many of the people who remain detained today in facilities where social distancing is impossible and COVID-19 outbreaks have been rampant. (As of Sunday, more than 9,000 people in ICE custody had tested positive for COVID-19 and 593 were being monitored for active infections.)

There are already some signs the Biden administration is moving towards letting out more people. It started a 100-day pause on some deportations, and David Pekoske, the acting Homeland Security Secretary, has directed ICE to provide a process for an individualized review for people who have deportation orders that are more than 90-days old. As part of that process, ICE will look at whether detainees can be released, or have their cases stayed, or reopened. But the status of that process was upended on Tuesday when a federal judge in Texas temporarily blocked the deportation pause.

In May, Wilfred sued for his release, and in a rare move, a judge assigned him a federal public defender. In October, the judge granted his legal team’s request to depose a senior ICE official and the warden of the Allen Parish jail. Two weeks later, ICE released him after 14 months in detention. The case became moot, and the ICE official avoided having to testify under oath.

Karim Golding, who came to the United States from Jamaica at 9 years old, has not had the same good fortune as Wilfred. After being arrested as a 21-year-old for selling cocaine and two handguns, he served 10 years in prison. When he was released in 2016, ICE took him into custody. He’s now at the Etowah County jail, a notorious Alabama jail that ICE uses for the long-term detention of people like Golding who are willing to fight their deportation for years. On March 20, as news of the pandemic spread, Golding and another detainee protested to demand that people transferred to the jail be quarantined first. He put a noose fashioned out of bed sheets around his neck and tied the other end to the second-floor railing of his unit, the Intercept reported. The threat of suicide forced officials at the jail to talk with the detainees about doing more to protect them from COVID-19, but it ultimately wasn’t enough to prevent a coronavirus outbreak.

In July, Golding started feeling ill and tested positive for COVID-19. In what appeared to be retaliation for demanding better conditions before testing positive, Golding told the Intercept he spent nearly two month in solitary confinement. It was summer in Alabama, and the cell he spent 23 hours a day in lacked air conditioning. After we spoke in December, another outbreak was reported at Etowah, this one affecting six detainees as of Sunday.

Like nearly everyone I’ve interviewed who has experienced both federal prison and ICE detention, Golding told me that the conditions in prison had been far better. Despite everything he’d been though, Golding said he favored keeping some immigration detention for people the government could show are dangerous. He thought that approach would leave ICE with something like two or three detention centers. To Wilfred, it seemed reasonable that people who come to the country seeking asylum would be detained for a few months while they establish that they have a significant chance of being persecuted in their home countries and the US government verifies their identity.

The difference, however, is that during that time, he believes people should be held in more humane conditions. He asked why people in civil detention, which is supposed to be non-punitive, are marched around in orange jumpsuits or taken to medical appointments in shackles. “That was my worst experience: the chains,” he says, recalling being shackled, “I felt like the slavery life was reliving itself in us.”

Golding hoped that people on the outside would not stop fighting for detained immigrants once Trump was out of office. He compared Trump to 9/11, explaining that the former president had united normally disparate factions. “But we have a tendency of getting complacent after these tragedies, and he was that tragedy,” he said. “You don’t want to be like, ‘Biden is the solution.’ We want to hold him accountable.”