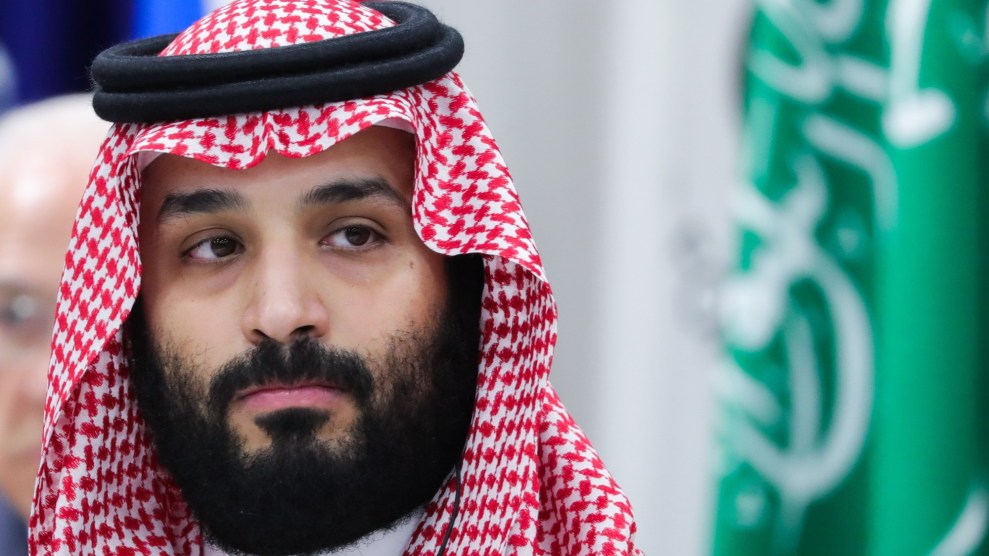 Last Friday, the Biden administration released a four-page intelligence report that concluded that Saudi Arabia’s Crown Prince Mohammed bin Salman, the country’s de facto ruler, personally approved a plan to murder journalist Jamal Khashoggi, a prominent critic of the kingdom’s leadership. And the assessment contained an additional revelation, stating that a Saudi team dispatched to Istanbul on October 2, 2018, under orders to kill or kidnap Khashoggi, “included officials who worked for, or were associated with, the Saudi Center for Studies and Media Affairs.” That’s a once-obscure Saudi office that has run varied efforts to burnish the image of the crown prince, known as MBS, and attack his critics. Since 2016, the center has been represented in Washington by Squire Patton Boggs, a powerhouse lobbying and law firm, which has pocketed around $2.7 million for the work. The firm continued working for the center after Khashoggi’s murder, and a spokesperson indicated it has no plans to stop advising the center, even after its client was implicated in the assassination plot.

In 2018, following news of Khashoggi’s grisly murder in a Saudi consulate in Turkey, where he had been lured, several prominent lobbying firms stopped working for Saudi Arabia. But Squire Patton Boggs is among more than two dozen lobbying, law, and public relations firms that remain on the Saudi government’s payroll. The Saudi government’s army of US advocates includes Brownstein Hyatt Farber Schreck, Hogan Lovells, King & Spalding, McKeon Group, Pillsbury Winthrop Shaw Pittman, and Qorvis Communications, among others. People contacted at those firms either did not respond to questions or said they planned to continue working for Saudi Arabia.

“We believe that the relationship between the United States and Saudi Arabia is too important” to stop working for Riyadh, said an official at one firm, who asked not to be quoted by name.

Unlike those other firms, Squire Patton Boggs directly represents an entity that US intelligence says was involved in Khashoggi’s killing. The Saudi Center for Studies and Media Affairs was led in 2018 by led Saud al-Qahtani, “a close adviser of Muhammad bin Salman, who claimed publicly in mid-2018 that he did not make decisions without the Crown Prince’s approval,” the intelligence report says. (Saudi Arabia’s government said Friday that it “completely rejects the negative, false and unacceptable assessment in the report pertaining to the Kingdom’s leadership, and notes that the report contained inaccurate information and conclusions.”) The Wall Street Journal reported in 2018 that MBS communicated with Qahtani in the hours before and after Khashoggi’s killing, evidence that a still-classified CIA report cited to conclude both men were involved in planning the murder. Qahtani personally oversaw Squire Patton Boggs’ lobbying efforts, according to the Foreign Agent Registration Act (FARA) filings that the firm submitted to the Justice Department.

“We thank you for the opportunity to represent [the] Center for Studies and Media Affairs at the Saudi Royal Court in providing legal and strategic policy advice and advocacy on foreign policy and related issues in the U.S. government,” Ed Newberry, the firm’s global managing partner, wrote to Qahtani in a September 19, 2016, engagement letter addressed to the Saudi official.

“When the U.S. government says the exact person who signed a lobbying contract with your firm is one of the people responsible for Khashoggi’s gruesome murder, how do you sleep at night?”

Newberry, described as the “King of K Street” on his bio page, wrote that he would oversee day-to-day work for Qahtani, with some of the firm’s top lobbyists—including former Senate Majority Leader Trent Lott, former Sen. John Breaux, and Jack Deschauer, who heads the firm’s defense lobbying practice—also on the account. The firm received $100,000 per month for the first year of work under the deal.

Lott and Breaux, who departed acrimoniously from Squire Patton Boggs last year, did not respond to requests for comment. Neither did Newberry and Deschauer.

In an email Monday, Angelo Kakolyris, a spokesperson for the firm, wrote: “Our FARA account has been inactive since 2016 and we have not been paid any money for lobbying activities.”

That does not jive with the firm’s own assertions to the DOJ. In a January 29 FARA filing, Squire Patton Boggs listed the Center for Studies and Media Affairs as one of the foreign clients it “continued to represent” over the prior six months, providing “general legal advice.” It reported receiving $157,300 from the center in that period.

Qahtani, who was removed from his post after Khashoggi’s murder, has been described as MBS’s closest aide and chief propagandist. As MBS accrued power—he became defense minister in 2015 and crown prince in 2017—Qahtani spearheaded the Saudi leader’s effort to bolster his image, running media manipulation schemes, armies of social media bots, and alleged hacking efforts that targeted figures such as Jeff Bezos and journalists including Khashoggi.

While most Washington lobbying shops working for the Saudis reported to their embassy, Squire Patton Boggs, along with three other firms, Republican-oriented BGR Group, the Democratic-leaning Podesta Group, and SGR, signed deals in 2016 with Qahtani’s center. MBS then was still vying with government rivals for power. So the firms reporting to Qahtani were more directly involved in the crown prince’s efforts to build his brand in Washington.

The four firms reported hundreds of lobbying contacts with the US government. The majority were aimed at influencing Congress, said Ben Freeman, who has analyzed Saudi lobbying at the Center for International Policy. The firm’s public disclosures are vague on what exactly its lobbyists advocated. One typical filing describes a June 2017 meeting with an aide to then-Sen. Dean Heller (R-Nev.) as focused on “US-Saudi Arabia bilateral relations.”

SGR terminated its work for the Saudis after a few months. Podesta, beset by scandal, shut down in 2018. BGR is one of the handful of firms that severed ties with Saudi Arabia in the wake of Khashoggi’s killing, a move that reportedly came after the Washington Post, where Khashoggi was a contributing columnist, told BGR Chair Ed Rogers that he had to cut ties with the Saudis or lose a gig writing for one of the paper’s blogs. That left Squire Patton Boggs as the only firm registered as an agent for the Saudi Center for Studies and Media Affairs. The firm has not reported lobbying contacts on behalf of that client since 2017, but it continued to advise the Kingdom after Khashoggi’s murder. And it kept collecting payments.

Freeman ripped the firm’s ongoing work for the Saudis. “When the U.S. government says the exact person who signed a lobbying contract with your firm is one of the people responsible for Khashoggi’s gruesome murder, how do you sleep at night?” he asked in an email. “How do you not question whether the work you’re doing is literally helping people get away with murder?”