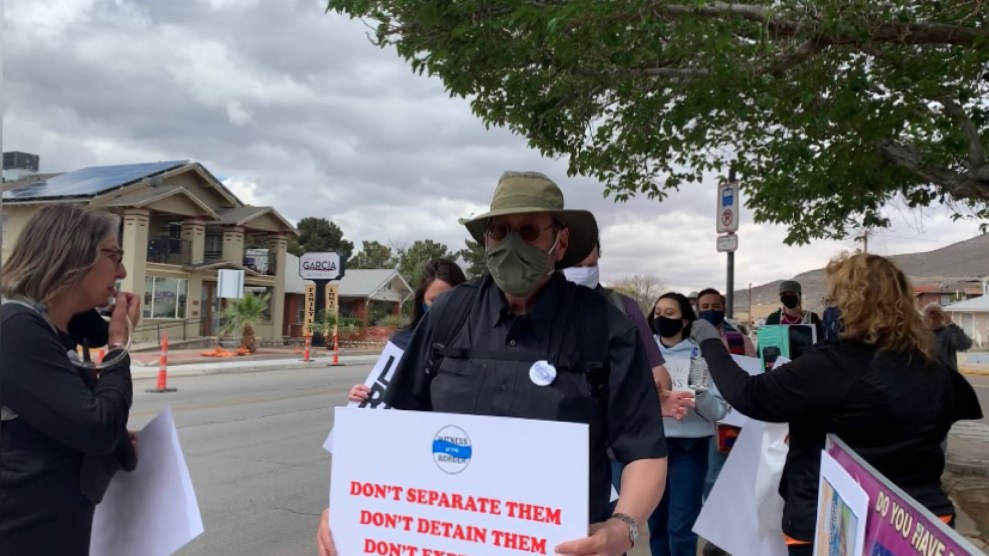 On Friday in El Paso, Texas, activists carrying plush toys and signs saying “free them” walked from the Paso Del Norte Bridge to Fort Bliss, a military base retrofitted to house unaccompanied minors arriving at the border of the United States and Mexico. Before starting the walk, protesters gathered for a prayer: “Let us hold in our hearts the children and parents expelled to Juárez, lingering in dashed hopes of security and freedom.”

The rally was held just after President Joe Biden’s 100th day in office to protest the administration’s continuation of a pandemic rule that has been called one of the “most anti-immigrant policies” of the Trump era.

In March of last year, the Trump administration utilized Title 42 of the Public Health Safety Act to stop noncitizen migration in the “interest of public health.” (Vice President Mike Pence pushed it through, despite concerns from scientists at the Center for Disease Control.) Title 42 has been used to turn away asylum seekers and unaccompanied minors for over a year. A backlog has in part fueled a misleading conversation about a “crisis” at the border. It’s also left migrant families vulnerable to danger in Mexico border towns. One activist group graded Biden’s actions on immigration so far, saying he’s failed to act on the “deadly and traumatizing” expulsions. A human rights report published in April discovered just under 500 attacks or kidnappings of asylum seekers expelled under the policy since Biden took office.

It has specifically been tied to the problem of minors entering the United States alone. A court order found Title 42 did not apply to minors, allowing them to cross but without their families—forcing them to live in facilities like Fort Bliss. The El Paso base can hold up to 5,000 children and opened last month during an influx of unaccompanied minors at the border through a partnership with the Department of Defense. (The partnership also provided 350 beds at Joint Base San Antonio Lackland.)

“Title 42 is really the root of many of the evils happening at the border,” said Tom Cartwright who formed the advocacy group Witness at the Border and helped organize the rally. “The parents were faced with an unimaginable decision, giving up hope that they can come across, they’re sending their children across to unite with family here.”

He hopes the walk shines a light on the children expelled to Mexico as well as those in facilities like Fort Bliss Military Base for long periods. “For us, walking [six miles] from the bridge to Fort Bliss is symbolic of that connection,” Cartwright said.

Ismael Ruiz-Millan, a pastor with the United Methodist Church in North Carolina, traveled to El Paso to attend the walk. “We’re walking…to ask for justice for the children who are detained,” Ruiz-Millan said. “As a father, I cannot imagine the pain and suffering that occurs.”

Francisco Chavez, an asylum seeker from Guatemala who spent the past year in Mexico and was just recently granted entry to the US, walked alongside Ruiz-Millan. Noting that many of the children are also from Central America, Chavez said he hoped that the demonstration would let the children know that they’re not alone.

Joshua Rubin, founder of Witness at the Border, said he thinks the left has given Biden a pass for too long on border issues.

“We have to let [Biden] know that the left can give him grief, too. He’s shown that he’s the kind of guy who does, in fact, respond to pressure,” said Rubin.