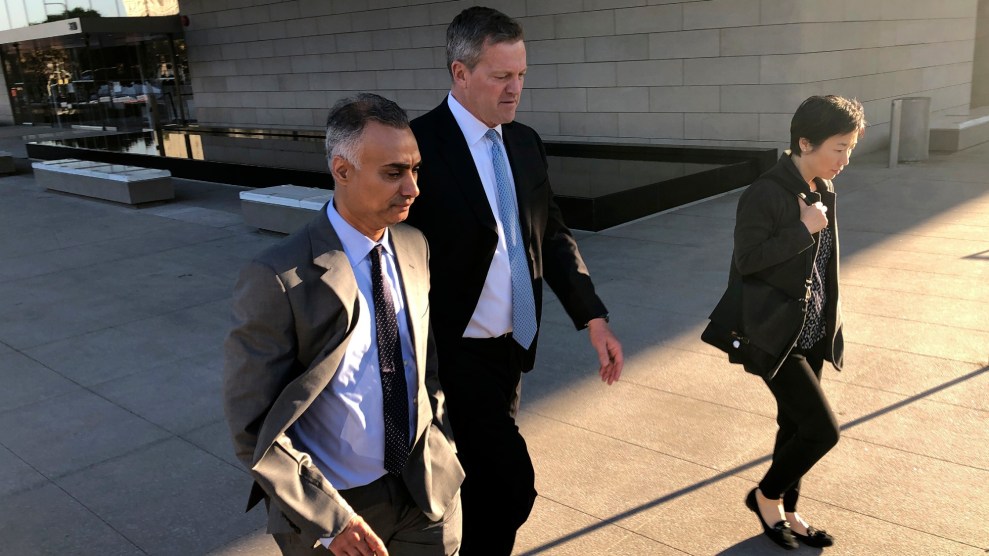 In June 2017, two former US officials, John Allen, a retired US Marine Corps four-star general, and Richard Olson, a retired State Department official and onetime ambassador to Pakistan and the United Arab Emirates, traveled to Doha, Qatar, on a secretive and important mission. They were dispatched by H.R. McMaster, then national security adviser for President Donald Trump, to meet with Qatar’s emir, Sheikh Tamim bin Hamad Al Thani. This was part of a US effort to deescalate a regional crisis. Saudi Arabia and the UAE, Qatar’s rivals, had blockaded Qatar and were threatening to invade the small natural gas-rich country, which houses a large American military base.

But the Trump White House did not rely on the US government to arrange and finance this trip. Instead, Allen asked Imaad Zuberi, an Pakistani American businessman and prolific campaign contributor with ties to US and foreign officials, for help, according to people with knowledge of the trip and emails reviewed by Mother Jones. Zuberi coordinated, joined, and paid for Allen and Olson’s travel, the emails indicate. That’s notable because Zuberi later pleaded guilty to a slew of violations of foreign lobbying and campaign finance laws, along with tax evasion and obstruction of justice. He was sentenced in February to 12 years in federal prison.

Prosecutors claimed that for almost a decade Zuberi had promised government officials and others in Turkey, Libya, Sri Lanka, Bahrain, and other countries that he would wield influence in Washington on their behalf, and he used their money to make illegal campaign contributions in the United States while pocketing some of the funds. He also evaded taxes on the millions he made through these schemes and obstructed investigations of his activities, according to prosecutors.

Until 2016, Zuberi’s contributions went largely to Democrats. He was a bundler for Hillary Clinton in 2016. But after Donald Trump’s victory, Zuberi reversed course, giving heavily to Trump and the GOP. His contributions included $900,000 to Trump’s inauguration committee. That contribution became the subject of an investigation by federal prosecutors in New York, who suspected, according to people with knowledge of the probe, that Zuberi made the contribution with money received from Qataris who were hoping to win influence with Trump. Zuberi eventually pleaded guilty to obstruction of justice for what prosecutors said were efforts to cover up the origin of the money. (The Trump inauguration case was combined with the separate foreign lobbying and obstruction case last year.)

In sentencing documents filed last fall, prosecutors asserted that at the time of the Doha trip, Zuberi was “secretly lobbying on behalf of Qatar” to “secure foreign policy changes from the Trump Administration.” This would mean that the guy who underwrote a secret White House mission to Qatar had been working for the Qataris. The prosecutors also said that Zuberi’s actions were investigated as part of a broader federal probe of Qatari influence efforts. According to people familiar with that investigation, federal prosecutors have impaneled a grand jury in Washington, DC.

Beau Phillips, a spokesperson for Allen, declined to respond to questions about Allen’s involvement with Zuberi and Qatar and the financing of the trip to Doha. “General Allen is not in a position to comment on these matters,” Phillips said.

The matter raises the question of how a man identified by the Justice Department as a criminal and Qatari agent became involved in a secret, high-level diplomatic mission to Qatar for the Trump White House.

In an attempt to appeal his sentence, Zuberi has claimed that he was a longtime source for US intelligence and that, for two decades, he did favors for the CIA and other American national security outfits. In a memo arguing for leniency, his lawyers call his record the “most remarkable list of assistance to the country encountered by experienced counsel and the court.” And in a sealed filing reported on by the Wall Street Journal and other outlets, Zuberi’s lawyers maintain he assisted CIA efforts to spy on foreign adversaries.

Zuberi cultivated relationships with prominent US and foreign officials, among them Olson and Allen. At the time of their 2017 trip to Qatar, Olson was an adviser to Zuberi’s company, Avenue Ventures, a person familiar with the matter said. (Olson was copied on email correspondence related to the Doha trip at an Avenue Ventures email address.) It is not clear how much Olson was paid or what services he performed for Avenue Ventures.

According to people with knowledge of Zuberi’s appeal, Zuberi has claimed in his sealed filing that in June 2017 he was seeking a contract to help Qatar modernize its military. Despite a lack of personal experience in that area, Zuberi hoped to recruit former senior US military officials, including Allen, as consultants for the project. He met with Allen for that purpose days before the trip to Doha, according to people familiar with the meeting. Zuberi did not hire Allen, who was then a fellow at Brookings. Allen became the organization’s president in November 2017.

In emails to Zuberi, Allen praised the businessman. “Thank you for facilitating what I think were very important talks with the Qataris,” he wrote to Zuberi on June 12, 2017. “They couldn’t have taken place without your leadership.” Allen apologized for Zuberi’s exclusion from a meeting with the Emir, and he signed off: “With great respect for what you’re doing for our great country every day!”

Before and after the weekend trip to Doha, Allen kept McMaster apprised of his efforts there. In a June 9 email, he praised Trump’s response to the crisis as “masterful,” despite Trump’s initial public support for Saudi Arabia and UAE against Qatar. Allen also touted his own long-standing relationship with Qatari leaders, noting: “I have their trust at several levels.” In multiple emails, he passed on Qatari perspectives on the Gulf crisis and transmitted their requests for meetings with senior US officials. He did not mention Zuberi.