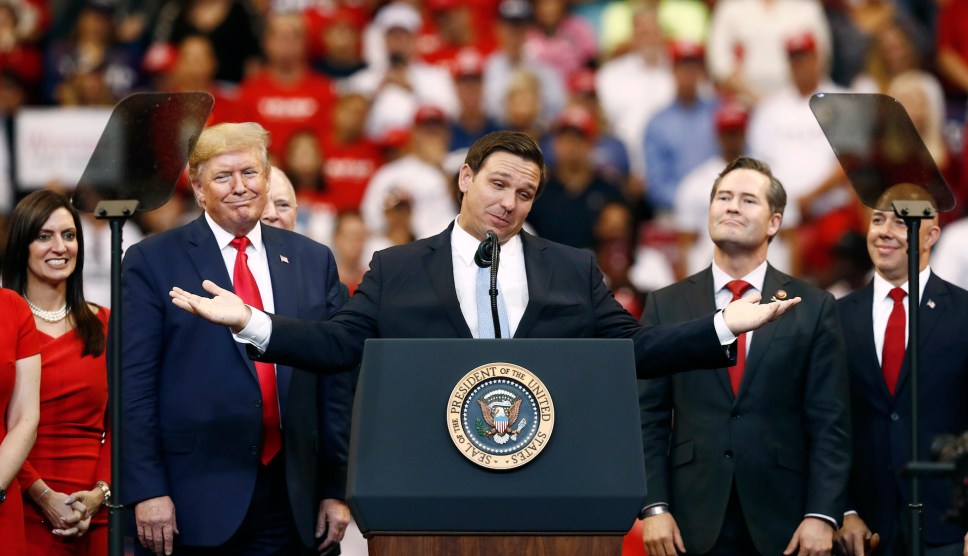 In the run-up to the 2020 election, when Donald Trump urged his supporters to ditch mail voting across the country, he made an exception for Florida. “In Florida the election system is Safe and Secure, Tried and True,” Trump tweeted in August 2020. “So in Florida I encourage all to request a Ballot & Vote by Mail!”

Trump voted by mail in the state, as did GOP Florida Gov. Ron DeSantis, who cast a mail ballot in six out of seven elections from 2016 to 2020. While they spread lies about widespread voter fraud in states Joe Biden won, Republicans cited Florida as a model of election integrity. “Perhaps 2020 was the year we finally vanquished the ghost of Bush versus Gore,” DeSantis said.

Dating back to the 2000 election cycle—when the GOP sent absentee ballot request forms to all registered Republicans to increase turnout among rural and elderly voters—Florida Republicans have pioneered the use of mail voting. But in 2020, for the first time in state history, Democrats in the state outpaced the GOP in mail voting, casting a whopping 680,000 more mail ballots than Republicans did. Trump still won the Sunshine State by 3 percentage points, but the sudden shift in voting patterns seems to have caused Republican politicians to do an about-face on the issue.

New legislation passed on Thursday night by Florida’s GOP-controlled legislature—which DeSantis has advocated for and is expected to sign—rolls back access to mail voting, following the blueprint enacted by Georgia Republicans last month. The centerpiece of the Florida bill severely restricts mail ballot drop boxes, which 1.5 million Floridians used in November. Whereas previously drop boxes were widely accessible across the state—including being open 24/7 in many locations under security surveillance—now drop boxes must be staffed by an election worker at all times, which will sharply limit the number of boxes and when voters can access them. “I could not give up one of my staff members to just sit at our drop box all day long, nor could I afford with my budget to hire another staff member just to do that,” Bradford County Supervisor of Elections Amanda Seyfang told WUFT News. In addition, county election supervisors will be subject to a $25,000 fine if they do not adhere to the legislature’s strict rules, which will further disincentive election officials from making drop boxes widely available.

The bill also makes mail ballots harder to obtain, requiring voters to apply for one every election cycle. In the past, voters only had to request them once every two election cycles. And it adds a new ID requirement to obtain a mail ballot, whereas previously none was needed.

In 2020, 43 percent of Floridians—4.7 million people—voted by mail, and Democrats accounted for 45 percent of mail voters compared to 31 percent for Republicans. While vote-by-mail use rose across the board from 2016 to 2020, it doubled among Black voters, the largest increase among any demographic group.

“It’s not Georgia,” said Democratic state Sen. Shevrin Jones of Broward County when the bill first passed the Senate on Monday, which happened to be Confederate Memorial Day in Florida. “But it’s definitely Georgia-lite.”

The bill echoes Georgia’s law in other ways as well. It bans groups from giving out food and water to voters in line. It prohibits election officials from accepting funding from nonprofit groups. And it increases the chances that ballots will be thrown out or contested by allowing partisan election observers to challenge every ballot to which they have a “reasonable objection.” Poll watchers for political parties or candidates must now be able to “view directly” ballots being examined for signature matching, which could lead to chaos inside ballot counting rooms.

“The number of people we’re talking about that would be allowed to get in and be in very close proximity to the ballot duplication process, I think presents very grave security risks for many offices,” Leon County Supervisor of Elections Mark Earley testified before the legislature.

For all of these reasons, Florida’s election supervisors unanimously oppose the bill. “I’m literally befuddled as to why we would tweak a system that performed exceedingly well,” said Pasco County GOP Supervisor of Elections Brian Corley.

Only reason Florida Republicans undermining mail voting, even though Trump & DeSantis used & praised it, is because more Dems than Republicans voted by mail for first time in Nov

Instead of appealing to more voters they want fewer people to vote pic.twitter.com/4Wk1WImKXo

But the Florida law follows a clear pattern emerging in GOP-controlled states: Take advantage of voting laws when they work for your party, but change them the minute the other side starts using them more.

Florida is now the seventh GOP-led state to enact new restrictions on voting this year, alongside Arkansas, Georgia, Iowa, Montana, Utah, and Wyoming.