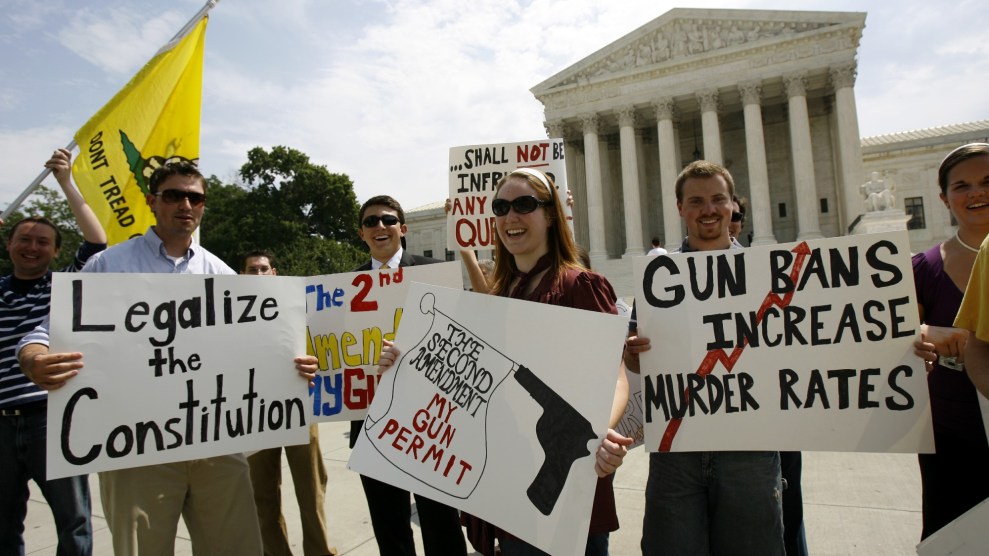 Gun rights supporters rally outside of the Supreme Court after the District of Columbia vs. Heller decision in June, 2008. Jose Luis Magana

The Supreme Court on Monday said that it would review its first major Second Amendment case in more than a decade—and its decision could have major implications gun rights.

The case in question, NY State Rifle &. Pistol Assoc. v. Corlett, challenges a New York state law, which was upheld by the lower courts, that requires gun owners to obtain a license if they want to carry a gun outside their home. It’s the first time the Supreme Court will review a Second Amendment case that could affect gun safety laws across the country since it issued a pair of landmark decisions in 2008 and 2010—Heller v. District of Columbia and McDonald v. Chicago—which effectively affirmed that any individual has the right to own a gun in their home for personal protection. But those rulings left a lot on the table in terms of gun regulation outside of an individual’s home—namely who can carry a concealed firearm in public.

Since Heller and McDonald, states and cities have been able to pass laws to restrict the carry of firearms in public; without any Supreme Court ruling on the issue, those laws have been challenged by the gun lobby, including the National Rifle Association, which has ties to the NY State Rifle & Pistol Association. Most states, however, don’t have any concealed carry restrictions outside of an individual’s home, save for New York and seven others: California, Delaware, Hawaii, Maryland, Massachusetts, New Jersey and Rhode Island.

NY State Rifle &. Pistol Assoc. v. Corlett will be reviewed by the Supreme Court a year after it decided not to hear a similar case that challenged New York’s concealed carry law. At the time, the Court ruled that the case was moot because the city of New York amended its law banning the transport of firearms from the city to anywhere outside of it—like a shooting range or competition—out of fear that the Supreme Court might issue a ruling that would threaten gun control laws across the country. The difference this time is that NY State Rifle &. Pistol Assoc. v. Corlett challenges New York State’s law, not the previous New York City law.

In his concurrent opinion on declaring last year’s court case moot, Justice Brett Kavanaugh forewarned that the Supreme Court would be reconsidering gun laws in the near future. “The Court should address that issue soon,” he wrote, “perhaps in one of the several Second Amendment cases with petitions for certiorari now pending before the Court.” The court is schedule to hear this new case sometime during its 2021-2022 term, so a decision isn’t likely until the spring or summer of next year.

With NY State Rifle &. Pistol Assoc. v. Corlett now on the Supreme Court’s docket, gun safety groups are worried about what it could mean for the future of the nation’s gun control laws, especially considering the court’s conservative supermajority thanks to the appointment of Justice Amy Coney Barrett in October. At the time of her nomination, gun safety groups like Everytown for Gun Safety and Giffords Law Center to Prevent Gun Violence were raising the alarm on Coney’s history on gun laws. “Amy Coney Barrett’s alarming interpretation of the Second Amendment would make her an ideal Supreme Court Justice for the NRA, but a terrible one for the safety of the American people,” said Shannon Watts, the founder of Moms Demand Action, a subsidiary organization of Everytown.

Though she only ruled in one Second Amendment-related case while she served on the US Court of Appeals for the Seventh Circuit, she was the lone dissenting opinion in a three-judge panel. And her opinion drew scrutiny, as I explained during her confirmation hearings:

In her dissent, she did not mince words in her disagreement with her colleagues, writing that the court’s ruling “treats the Second Amendment as a ‘second-class right.’” She disagreed with the statistical evidence cited by her colleagues that shows that felons, even those convicted of non-violent offenses, are more likely to commit gun-related crimes. “History is consistent with common sense: it demonstrates that legislatures have the power to prohibit dangerous people from possessing guns,” she wrote. “But that power extends only to people who are dangerous. Founding-era legislatures did not strip felons of the right to bear arms simply because of their status as felons.”

With the Supreme Court set to review NY State Rifle &. Pistol Assoc. v. Corlett, gun safety groups are, once again, sounding the alarm that gun control laws are under threat. “Today’s announcement is a warning sign that our nation’s highest court is poised to brush aside the will of the people and instead side with gun lobby groups seeking to eliminate even the most modest firearm laws,” Hannah Shearer, Gifford’s litigation director, said in a statement on Monday. “Such an extreme decision would be out of step with Second Amendment precedent, historical evidence, and the views of the overwhelming majority of Americans.”