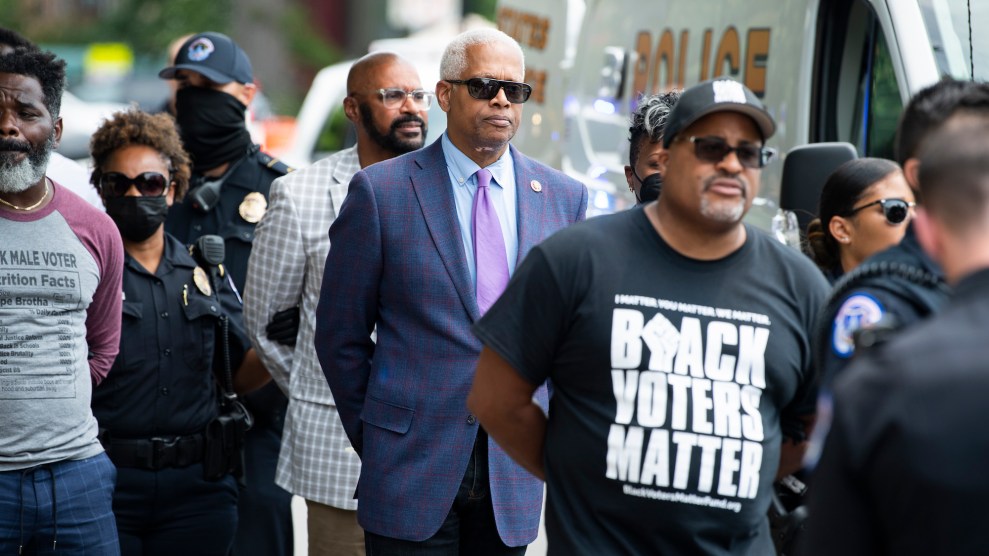 In a CNN town hall on Wednesday, President Joe Biden called the wave of new laws restricting voting access “Jim Crow on steroids.” Despite that, he made clear he was not in favor of abolishing the filibuster—a relic of Jim Crow—in order to pass federal legislation that would counter GOP voter suppression efforts.

Biden said in Cincinnati it would “throw the entire Congress into chaos and nothing will get done” if Senate Democrats scrapped the 60-vote requirement to pass voting rights bills. “I want to make sure we bring along not just all the Democrats; we bring along Republicans, who I know know better.  They know better than this.”

That stance doesn’t sit well with voting rights advocates, who point out that every Senate Republican voted last month to block debate on the For the People Act, the Democrats’ sweeping democracy reform bill. And only one GOP senator, Lisa Murkowski of Alaska, supports the John Lewis Voting Rights Advancement Act, which would require states with a history of discrimination to once again approve their voting changes with the federal government.

“While we fully support the ideal of bipartisan cooperation on voting rights, the partisan political agenda of some in the Senate cannot be allowed to block passage of legislation that has broad bipartisan backing,” 150 civil rights groups led by the Leadership Conference on Civil and Human Rights wrote to Biden in a strongly worded letter on Thursday. “And we certainly cannot allow an arcane Senate procedural rule to derail efforts that a majority of Americans support.”

While Biden called passage of federal legislation to protect voting rights a “national imperative” in a much-touted speech in Philadelphia on July 13, he never mentioned the filibuster or laid out a plan for how he planned to overcome GOP obstruction in the Senate.

This has led to asymmetric warfare between the parties: Republicans in state legislatures have passed an unprecedented number of new laws this year designed to make it harder for Democrats to cast ballots on simple majority party-line votes (30 new laws passed in 18 states so far this year), while Senate Democrats in Washington are insisting on support from 10 Republicans in order to pass federal legislation that would stop it, essentially giving Mitch McConnell veto power over protecting voting rights.

“Only federal legislation can ensure that our elections are safe and free and fully protect the franchise,” said the letter from the Leadership Conference. “While we support the notion of a broad-based coalition of advocates, we cannot and should not have to organize our way out of the attacks and restrictions on voting that lawmakers are passing and proposing at the state level.”

Melanie Campbell-@coalitionbuildr and @AriBerman explain the For the People Act vs. the John Lewis Voting Rights Act and why we need both. #TheReidOut #reiders pic.twitter.com/61lcy3lvLS

Indeed, while Biden said in the CNN town hall “the American public, you can’t stop them from voting,” pointing to record turnout in 2020, many of the new restrictions on voting passed by Republicans this year roll back the voting methods that led to increased turnout in the last election, by instituting measures like prohibiting election officials from sending out mail ballot requests forms, cutting the number of mail ballot drop boxes, repealing Election Day registration, and cutting early voting days.

Moreover, some states, like Georgia, have passed new laws that could lead to GOP election officials overturning election results, a form of election subversion that cannot be overcome by grassroots organizing. And in a few weeks the Census Bureau will release redistricting data that will allow GOP-controlled states like Georgia and Texas to draw new maps that will likely lock in one-party control of those states for the next decade and could cost Democrats their majority in the House of Representatives in 2022.

For that reason, civil rights groups are upping the pressure on Biden to get more engaged in the Senate debate over voting rights, urging him to expend as much energy on this issue as his administration has in lobbying for an infrastructure deal.

Last week, the chair of the Congressional Black Caucus, Rep. Joyce Beatty (D-Ohio) was arrested inside the Senate for demonstrating in favor of voting rights. On Thursday, another group of voting rights advocates, including Rep. Hank Johnson (D-Ga.), were arrested outside the Hart Senate Office Building.

Texas Democrats who fled their state for Washington to block a sweeping GOP voter suppression bill have made clear that if Congress doesn’t pass federal legislation by August 6, when their special legislative session ends, Republican governor Greg Abbott will immediately call a new one and arrest the legislators when they return home, denying them the ability to block it again.

“Part of what we’re doing here is expressing how dire it is that we get this done,” Texas Democratic Rep. John Bucy III told me after he arrived in Washington. “There is a direct assault on voting rights in states all across this country, and it’s imperative we have a federal solution to this problem.”