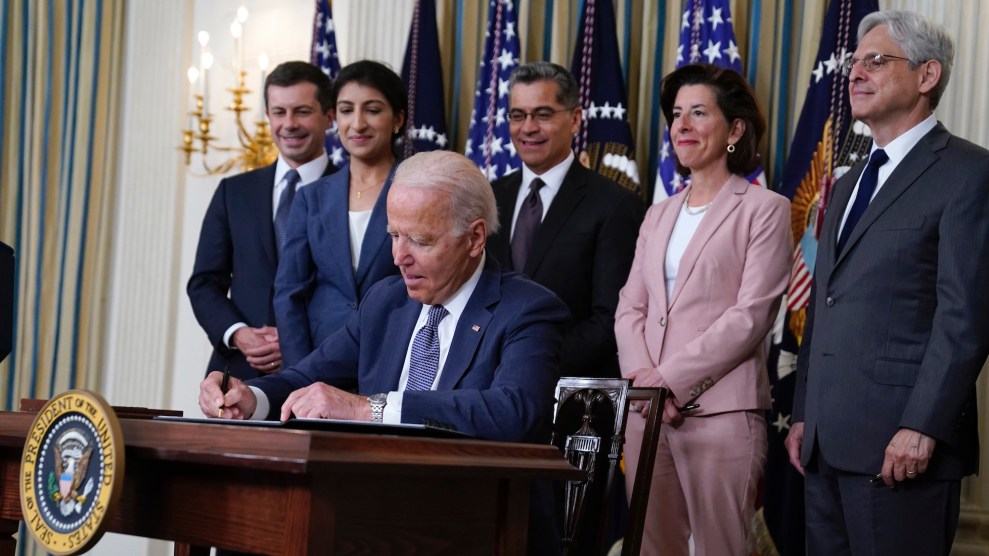 President Joe Biden signs an executive order aimed at promoting competition in the economy, with antitrust stalwart Lina Khan, chair of the Federal Trade Commission, to his left.Evan Vucci/AP

Last Friday, President Joe Biden released a sweeping executive order on “Promoting Competition in the American Economy,” aimed at taking on massive corporations that dominate multiple marketplaces. Much of the focus of this trustbusting has been on tech. But as I wrote in March, the antitrust proponents Biden appointed have also been fierce critics of Big Ag. The order looks likely to fulfill that framework: an attempt to rein in not only Amazon but the handful of corporations that have loomed over the US food system for years, too.

In the food economy, massive firms have exerted downward pressure on workers’ wages, boosting returns to shareholders while causing widespread poverty for farm, fast food, and meatpacking workers. They’ve used their outsize power to force their will on farmers, shaping decisions over the seeds they plant, the chemicals they spray, and the conditions of the animals they raise. “Farmers are squeezed between concentrated market power in the agricultural input industries—seed, fertilizer, feed, and equipment suppliers—and concentrated market power in the channels for selling agricultural products,” the order explains. “As a result, farmers’ share of the value of their agricultural products has decreased, and poultry farmers, hog farmers, cattle ranchers, and other agricultural workers struggle to retain autonomy and to make sustainable returns.”

For decades, US administrations have allowed agribusinesses to merge largely unimpeded, insisting that fewer companies means more efficiency and lower prices for consumers, including cheap food.

Biden’s order rejects that logic, arguing that hyper-consolidation squeezes farmers and other workers and can actually jack up food prices. As the order says, “Four large meat-packing companies dominate over 80% of the beef market and, over the last five years, farmers’ share of the price of beef has dropped by more than a quarter—from 51.5% to 37.3%—while the [retail] price of beef has risen.” For various dysfunctions in our food system—poverty wages for workers, tight margins for farmers—the order points the finger at unchecked corporate power, and it goes on to call for remedies to level the playing field.

On the labor front, the order instructs the Federal Trade Commission—now chaired by antitrust stalwart Lina Khan—to “ban or limit” the practice of forcing employees to sign contracts prohibiting them for working for competitors, in what are known as “noncompete agreements.” These tools are most famously employed in the tech industry—allowing, say, Google to prevent a star engineer from taking a higher-paid job at Facebook and thus dampening overall wages in high-earning fields. But highly profitable fast-food companies freely impose them too, limiting opportunities and pay raises for a labor force so dismally compensated that more than half have to rely on public assistance programs.

For farmers, the order challenges the power that giant meatpacking companies exert over livestock markets in several ways. In 2016, in the waning days of the Obama administration, the US Department of Agriculture issued a blunt assessment of the state of the poultry industry, portraying it as dominated by a handful of chicken processors that “often wield market power” against the farmers who raise the nations’ chickens, “treating [farmers] unfairly, suppressing how much they are paid, or pitting them against each other.” The Obama USDA belatedly proposed rules (which I spelled out here) that would make it easier for farmers to sue companies for unfair treatment. The Trump administration promptly nixed them. The new executive order pushes the USDA to revive the rule.

The order also directs the USDA to ensure that meat products labeled “Product of USA” are actually grown here. The handful of companies that dominate meat production—led by US-based giants Tyson and Cargill, Brazil-owned JBS, and Smithfield, whose parent company is headquartered in China—can slap that label on meat raised elsewhere and cut into parts (or even just repackage) in the United States.

The order requires the USDA to issue a report on the impact of market concentration in seeds and other agriculture inputs—reviving an effort undertaken by the Obama Department of Justice but abruptly dropped without explanation, as I reported in 2012. “Just four companies control most of the world’s seeds, and corn seed prices have gone up as much as 30 percent annually,” according to the fact sheet. Those same companies—Bayer Crop Science (formerly Monsanto), Corteva (the spinoff of the Dow-DuPont merger), Syngenta, and BASF—also basically own the global pesticide market and often use their seed dominance to push farmers into buying more pesticides.

No single executive order can transform the precarious conditions faced by farmers in a food system dominated by giant corporations that exist to maximize profits for shareholders. But the Promoting Competition in the American Economy edict marks a start—and a break from a half-century of laissez-faire antitrust policy.

Farmer and labor advocates hailed the order: “Not since Teddy Roosevelt and Franklin D. Roosevelt has a President taken on corporate power to this extent,” Missouri farmer Joe Maxwell, president of Family Farm Action Alliance and a long-time critic of corporate consolidation in agriculture markets, said in a statement. Marc Perrone, president of the United Food and Commercial Workers International union, added that the “action puts workers and consumers first by strengthening oversight of meatpacking monopolies that suppress wages and drive up food prices at the grocery store.”