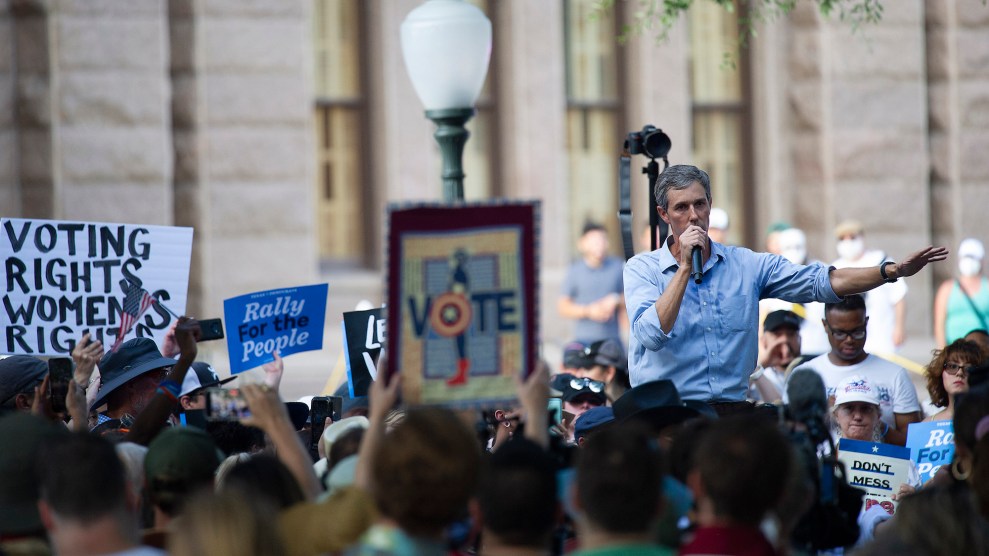 Beto O’Rourke is once again crisscrossing the state of Texas, like he did during his breakneck challenge to Sen. Ted Cruz in 2018. He’s no longer running for office but trying to register new voters in order to expand the electorate and flip the state blue.

The opportunity is there: Texas has 3 million unregistered voters, and Democrats estimate, based on demographics, that roughly 2 million of them would vote for their party if they registered and went to the polls, after Joe Biden lost the state by just 630,000 votes in 2020. But Texas law makes it monumentally difficult to register voters.

Unlike 40 states, Texas has no online registration. Anyone who wants to sign up voters must be deputized by each county he or she works in, every two years, which makes statewide voter registration drives nearly impossible in a state with 254 counties. So O’Rourke has spent much of 2021 becoming a volunteer deputy registrar in 15 counties, in places as large as Houston’s Harris County (population 4.7 million) and as small as Rains County east of Dallas (population 10,914).

“It’s a slow, laborious, very labor-intensive process,” O’Rourke told me. And voting in Texas could soon get even harder. On Thursday, the GOP-controlled legislature is beginning a special legislative session that will revive a sweeping voter suppression bill that was blocked at the 11th hour in May when Texas House Democrats staged a dramatic walkout before a midnight deadline, denying Republicans the quorum needed to pass it. So Gov. Greg Abbott called a special session to pass new voting restrictions, along with far-right priorities like banning critical race theory and preventing trans-gender athletes from competing in Texas sports.

“Texas is the toughest state in which to vote,” says O’Rourke. (A recent study from Northern Illinois University came to the same conclusion.) “This election bill would take it to a place so far removed from democracy that it would beg the question: What kind of form of government would we have?”

The legislature’s Democratic minority can only stall the voting bill for so long. So O’Rourke and other Democrats are engaged in a desperate two-pronged effort to prevent their constituents from disenfranchisement: a tedious, tortuous registration effort and a lobbying push to get Democrats in Washington to pass legislation protecting voting rights before new restrictions can take effect.

The voting bill, known as SB 7, restricted every means of voting in Texas when it was introduced in the last session. It eliminated innovative voting methods such as drive-thru voting, curbside voting, and extended voting hours that helped increase turnout in large urban counties like Harris County in 2020. It banned mail ballot drop boxes and required voters with disabilities to show proof of their disability to qualify for a mail ballot. It cut Sunday voting hours, when Black churches hold “Souls to the Polls” voter mobilization drives. It made it a felony for election officials to give a mail ballot request form to a voter who has not requested one and subjected election workers to criminal penalties for 14 kinds of actions, such as obstructing access for partisan poll watchers and modifying state election procedures. And, to top it all off, it made it easier for candidates to petition judges to throw out election results.

After public outcry, Republicans have backed away from a few of the most controversial provisions. On Wednesday night, Texas House Republicans introduced legislation that mirrors much of SB 7. It no longer contains provisions making it easier to overturn elections and cutting Sunday voting. But it would ban drive-thru voting and 24-hour voting, expand access for partisan poll watchers, prohibit election officials from sending out absentee ballot request forms, ban mail ballot drop boxes, and add new ID requirements for mail ballots.

These measures would compound state laws that already make it hard to vote. Texas limits mail-in voting to people over 65 and voters who are out of town during the election, in jail, or have a “sickness or physical condition” that prevents them from going to the polls. (It was one of only five states that did not expand mail-in voting during the pandemic in 2020.) Voting in person requires showing certain types of IDs—a list that seems designed for partisan skew. Under the state’s voter ID law, a handgun permit is an acceptable form of identification but a state-university issued ID is not. The state has closed 750 polling places since the Supreme Court gutted the Voting Rights Act in 2013, more than any other state, disproportionately in Black and brown communities. Despite seeing its highest turnout in nearly 30 years in 2020, Texas still ranked 44th among states in voter turnout.

“There seems to be some hesitation to pull out all the stops to protect our right to vote,” says state Rep. Rafael Anchia. “In Texas, we can’t wait much longer.”

Texas Democrats say they’ll use whatever powers they have to try to block the new bill—which could include walking out of the chamber to prevent a vote or even fleeing the state, as they did for a month in 2003 in an unsuccessful attempt to prevent Texas Republicans from redrawing the state’s redistricting maps mid-decade.

“If we need to, we can use the quorum break that we used to kill the bill the first go-around,” says Democratic state Rep. Rafael Anchia, one of the party’s leaders on election issues and the chair of the state’s Mexican American Legislative Caucus.

But at most that will only delay GOP efforts to pass the bill. Texas Democrats say they need congressional Democrats to pass federal legislation that would roll back voter suppression efforts. The For the People Act, blocked by a Republican filibuster on June 22, would enact nationwide automatic registration and a ban on partisan gerrymandering; the John Lewis Voting Rights Advancement Act, which has not yet come up for a vote in Congress, would require states like Texas to once again get any voting changes approved by the federal government.

“It’s a matter of weeks or maybe a couple of months that are left to us before I think it becomes hard to preserve free and fair elections in the 2022 election cycle throughout much of the country,” says O’Rourke.

Last month, Anchia traveled to Washington with other Democrats in the Texas legislature to meet with Democratic leaders, including Vice President Kamala Harris and Senate Majority Leader Chuck Schumer, to urge them to make passage of the voting rights bills a top priority.

“The message that came back from them is: Keep fighting the good fight and buy us some time to pass federal legislation,” says Anchia.

They had some success. Sen. Joe Manchin (D-W.Va.), who earlier said he opposed the For the People Act, changed his position after meeting with Texas Democrats and civil rights groups and endorsed a scaled-back version of the bill that protects less restrictive voter ID laws. But with Texas Republicans reviving SB 7 and Democrats planning to leave Washington in a few weeks for an August recess, time is running out.

“There seems to be some hesitation to pull out all the stops to protect our right to vote,” says Anchia. “In Texas, we can’t wait much longer.”

Supporters of the filibuster, like Manchin, haven’t signaled how they’ll pass a For the People Act compromise given that it almost certainly won’t win 60 votes, and has the White House, which is holding a pair of voting rights events on Thursday, hasn’t made reforming the filibuster a priority.

“This election bill would take [Texas] to a place so far removed from democracy that it would beg the question: What kind of form of government would we have?” says Beto O’Rourke.

Anchia notes that “there has been an asymmetry in terms of tactics” between the parties. In 2011, Texas Republicans pushed aside a decades-old tradition requiring a two-thirds supermajority to bring up bills in the Texas Senate in order to pass a new voter ID law. But Senate Democrats won’t get rid of the 60-vote requirement to pass legislation protecting voting rights—even as Republicans unilaterally make it harder to vote in states through simple majority votes.

“Republicans are willing to do anything in the state of Texas to pass this,” says Anchia. “We need to be equally aggressive in trying to preserve voting rights and protect our freedom to vote.”

In the meantime, Texas Democrats have announced a plan to register 1 million new voters in advance of the 2022 midterms, by mailing them registration forms, recruiting volunteer deputy registrars, and going door-to-door—a highly ambitious goal in a state where voter registration is so hard.

“This is kind of an insurance policy,” O’Rourke says. “If we’re unable to stop what’s going to happen in the state legislature during the special session, if we’re unable to get For the People passed, then if we can register hundreds of thousands or maybe millions of people over the next year and a half, you might still have a shot at electing candidates who believe in democracy.”