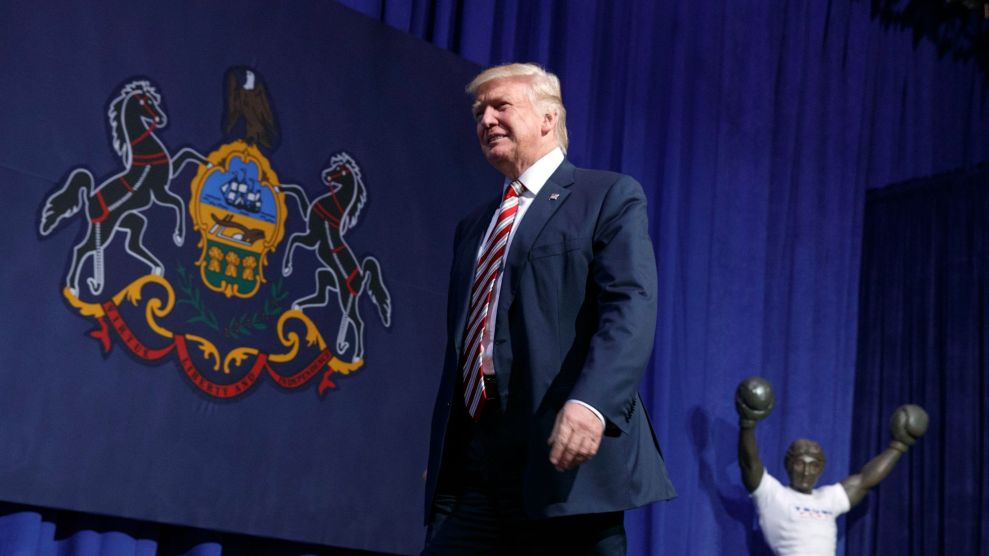 On Monday, the Justice Department announced the indictment of two Republican operatives for allegedly funneling $25,000 from a Russian citizen to Donald Trump’s campaign and the Republican National Committee in 2016. In leveling those charges, the feds generated a mystery: Who was the Russian? The indictment charged Jesse Benton and Doug Wead, who have links to Trump and Sen. Rand Paul (R-Ky.), but it did not identify the person who originally provided the money, who it referred to simply as “Foreign National 1.” But publicly available evidence suggests that man is probably Roman Vasilenko, a retired Russian naval officer and now a St. Petersburg, Russia-based businessman who operates a multi-level marketing company.

In one email to the event organizers, Benton emphasized that their Russian guest wanted to have his picture taken with the candidate. “The[] photo is important to him,” Benton wrote, according to the indictment. And he got his wish: Foreign National 1, the translator, and Wead all had official photos taken with Trump, and Wead took a photo of the Russian man posing with Trump on his personal camera, the indictment notes.

Those photos provide the apparent link between the indictment and Vasilenko, which was first reported by Forensic News, a nonprofit investigative journalism publication.

Vasilenko documented his foray into American politics on his social media accounts, which include details that seem to line up neatly with the government’s allegations. His company, Life Is Good, not to be confused with the American t-shirt company, created a video that shows Vasilenko and his entourage, all wearing shirts bearing the company’s logo, being squired around Washington by Wead in September 2016. This included a stop at Paul’s Senate office and at Wead’s house. The video also features footage of Wead and Vasilenko at an event where Trump can be seen addressing a small group of people behind them.

And, it shows Vasilenko meeting Trump, with the flag of Pennsylvania in the background.

Vasilenko and Life Is Good did not respond to requests for comment. But according to the caption and narration of the video, he met with Trump on September 22—the same day as Trump’s fundraiser in Philadelphia—while on a multi-day trip to the United States.

Vasilenko is a character—a former Russian naval officer who boldly claims his multi-level marketing firm will help customers learn how to prosper like he has. His social media is full of pictures of him looking successful in a Vladimir Putin sort of way. There are photos of Vasilenko looking thoughtful, standing on army tanks, signing paperwork, embracing a private jet, and performatively enjoying the outdoors. And there’s the shot of him posing with Trump, under the large caption (in Russian): “Two Presidents.”

Vasilenko also posted a photo of himself at a table meeting with then-candidate Trump. Both photos appear to be from the same event that is featured in the Life is Good video.

Wead’s attorney declined to confirm that Vasilenko was Wead’s guest at the event, but in wire service photos from Trump’s multi-stop campaign trip to Philadelphia that day, Trump was sporting the same red, white, and gray striped tie that he wore in the photo with Vasilenko.

The indictment alleges that Benton didn’t pay the RNC and the Trump campaign until well after the September 22 event but that when he eventually did, he used his personal credit card and explicitly told campaign officials the donation was from him. He then paid his credit card bill from the same account into which the Russian national had deposited $100,000, the DOJ claims.

Donating money on someone else’s behalf is illegal—it’s called a straw-donor scheme—and constitutes an even more serious violation of the law if the true source of the funds is a foreign national.

This is the latest in a series of recent cases in which the Justice Department has charged US political operatives with arranging straw donations to funnel money to US political candidates. While some cases have involved contributions to Democratic politicians, a number of them have focused on Trump’s 2016 campaign. In 2016 and 2017, moreover, opportunistic DC lobbyists with real or purported links to Trump charged foreigners strikingly large fees for arranging access to, or merely a picture with, Trump. This is legal as long as the foreigners do not secretly donate to the lawmakers.

While the new indictment accuses Benton, a longtime political consultant who is married to Ron Paul’s granddaughter, of directing the contribution to the Trump campaign, it also alleges deep involvement from Wead.

Wead is frequently described as a “presidential historian” in his many television news appearances—including a number in which he mocked and downplayed the idea of Russian involvement in the 2016 Trump campaign. He also had a side gig. According to Vasilenko’s social media and company website, he and Wead have been business associates or collaborators for years, with Wead having traveled to Russia and appeared at events for Life Is Good.

In an over-the-top endorsement video for Vasilenko’s business, Wead gushes, “What is success and how to do you get it? To me success has often been who you know, which brings to mind Life Is Good and Roman Vasilenko. He’s young and strong. He’s a leader. He’s filled with imagination and great ideas. He’s surpassed the competition, he’s surpassed time…I look back over my life and the things I regret [are] the things I didn’t do, the decisions I didn’t make. I’ve made this decision. I’m working with Roman Vasilenko. I am working with Life is Good.”

Wead has been a fixture in GOP circles for years. He served as a special assistant to the president in the George H.W. Bush White House. He advised Ron Paul’s 2012 presidential campaign and, then, the 2016 presidential campaign of Rand Paul, Ron’s son. Along the way he has written a series of books, some about presidents and some with titles like “DREAM BIG: Ninety-nine Steps to Network Marketing Success.” Wead wrote several books featuring the Bush family. But in 2005 he released a series of recordings he had made of George W. Bush without Bush’s knowledge, causing a break with the family. Wead has lately allied himself with Trump World, publishing a 2017 “insider” account of the 2016 presidential campaign and a 2019 book about the inner-workings of the Trump White House. Both books were sympathetic portraits of Trump written with the full cooperation of the president, who sat for interviews and later tweeted his endorsements.

In April, Wead visited Trump at Mar-a-Lago, where Trump called him “my favorite historian.”

Wead appeared in a federal court in Washington, DC, on Monday, represented by Jay Sekulow, who also represented Trump during the Robert Mueller investigation. Sekulow said in a statement that Wead is “a respected author and supporter of charitable causes. He has pleaded not guilty and will continue to respond appropriately in court.”

Benton already had a tangled history with campaign finance law. While working on Ron Paul ‘s presidential campaign, Benton and several other Paul aides connived to funnel $73,000 to a then-Iowa state senator who switched his endorsement from Michelle Bachmann to Paul. Benton was convicted in 2016 on four charges relating to the scandal. He was sentenced to six months home confinement and two years probation on September 20, 2016—two days before the Trump fundraiser at the center of Monday’s indictment, according to court records.

Benton didn’t attend the fundraiser and doesn’t seem to appear in any of Vasilenko’s social media postings about the event. According to the indictment, Benton and Wead started working on their plan on September 12, eight days before Benton’s sentencing on the earlier charges. And the DOJ alleges that Foreign National 1—presumably Vasilenko—landed in the United States on September 20, just about the time Benton was sentenced in an Iowa courtroom.

A few weeks later, Benton was caught in a sting investigation by the Telegraph, a London newspaper that sent reporters posing as representatives of a wealthy Chinese person to meet with him. Benton allegedly told the undercover reporters he could arrange for their funds to be funneled through dark money groups and spent on pro-Trump political activities, according to the paper. (At the time, Benton denied he had done anything “unethical”.)

Benton, who was still on home confinement at the time of the incident with the Telegraph reporters, was admonished by his probation officer for traveling without permission to New York, where the sting occurred, according to court filings that referenced the newspaper’s investigation. In December 2020, Benton received a pardon from then-President Trump, clearing his record of the 2016 conviction.

Wead and Benton now face six charges, including conspiracy, operating a straw-donor scheme, and aiding a foreign national in making a political donation.