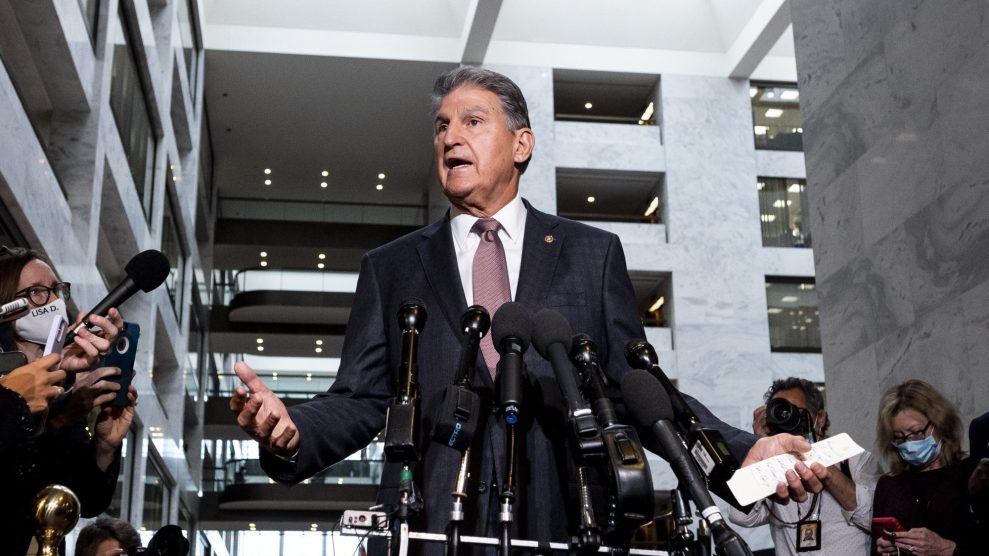 Sen. Joe Manchin’s role in overhauling the spending bill has sparked national interest in reining in congressional conflicts of interest. The question is whether anything meaningful might come of it.

The Biden administration’s current predicament demonstrates what’s at stake: The ambition of enacting comprehensive climate action has been waylaid by two centrist senators. One of them, West Virginia Democrat Manchin, owns millions of dollars in coal industry stock and has received more donations from fossil fuel and energy companies so far this election cycle than any other senator.

Manchin has demanded a reduction in the size of the budget bill, from $3.5 trillion to $1.5 trillion. He specifically opposed the proposed Clean Electricity Performance Program, a $150 billion package of financial carrots and sticks designed to transition American industries from fossil fuels to renewable energy.

More than any other proposal, the CEPP was considered central to slashing the emissions of CO2 and methane—a more potent greenhouse gas—to pull the world back from the brink of climate catastrophe. Moreover, it would have slowly chipped away at fossil fuels, including coal, the industry that made Manchin and his family wealthy. But Manchin’s opposition killed the CEPP, and now Democrats are scrambling to remake the bill in a format acceptable to Manchin.

The administration’s standoff with Joe Manchin “is a statement as to how pathetically weak congressional ethics rules are.”

Plenty of industries are governed by laws or codes of ethics that touch on financial conflicts. Under the Stark Law, doctors are forbidden from referring patients directly to outside medical services in which they hold a financial stake. Professionals certified by the American Bankers Association must agree to conduct their business affairs “in a manner that avoids a conflict of interest or the appearance of a conflict of interest.”

Journalists, certainly at mainstream publications, are generally barred from accepting gifts from sources, or from writing about companies and industries in which they or any immediate family member holds a financial interest. Judges are ethically and legally bound to recuse themselves from cases that may affect their financial fortunes—and scandal erupts when, as of late, they fail to do so.

The Democratic caucus recently had a chance to support a bill that might have prevented the Manchin situation, but they didn’t take advantage of it. In 2018, Sen. Elizabeth Warren introduced the Anti-Corruption and Public Integrity Act, a sweeping bill that would have tightened conflict-of-interest restrictions and prohibited members of Congress from owning or trading individual stocks—as the Federal Reserve demanded last week of its own senior officials. Even in the wake of the Trump administration’s brazen conflicts of interest—which prompted Walter Shaub, then director of the US Office of Government Ethics, to resign shortly after Trump took over—not a single member of Congress initially co-sponsored Warren’s bill.

At present, there is just one rule on the books governing the type of conflict Manchin faces, Holman explains, and it’s a narrow one. Lawmakers may not take any legislative action that would affect their businesses or investments solely. But they may act on legislation that affects a business sector even if they hold investments in that sector. “That’s exactly what Manchin is doing—trying to craft policies that benefit the coal industry generally, and will also personally benefit his wealth and the wealth of his family,” Holman says.

Financial conflicts plague every corner of government, says Claire Finkelstein, professor at the University of Pennsylvania and founder and academic director of the Center for Ethics and the Rule of Law. Congress is certainly no exception: “We’ve had case after case after case of members of Congress where we suddenly learn that they have stock or engage in transactions in areas relevant to their lawmaking. And it just keeps happening.”

Take Georgia Republican Sen. Kelly Loeffler, who lost her reelection bid last year. Loeffler was appointed to the Agriculture Committee despite owning  $5 million to $25 million worth of stock in companies that the committee oversees. (She later removed herself from the committee.) Loeffler was also investigated by the Department of Justice alongside Republican colleague James M. Inhofe and Democrat Dianne Feinstein for selling stocks after receiving a private briefing on the coronavirus early in the pandemic. The department did not pursue charges of insider trading because the lawmakers’ behavior was deemed legal.

Nancy Pelosi raised eyebrows by purchasing Tesla stock options at a time when the EV sector stood to benefit from a Democratic expansion of renewables.

House Speaker Nancy Pelosi raised eyebrows by purchasing between $500,000 and $1 million in Tesla stock options in December 2020, a time when the EV sector stood to benefit from a Democratic expansion of renewable energy. According to her public disclosures, Pelosi also invested substantial sums in Apple and Disney. Pelosi’s purchases speak to the normalization of ethical lapses that many institutions won’t tolerate. “That’s a huge problem in and of itself, the absence of shock around conflicts of interest,” Finkelstein says. “It’s almost assumed that’s going to be the case.”

There are other ways to tackle conflicts, she adds, such as rigorously prosecuting lawmakers who violate insider trading laws, beefing up financial disclosure requirements, and increasing oversight. But “Congress would have to be willing to self-regulate, to say ‘we’re going to tie our own hands.’ Nobody else can do it, unfortunately.”

Lawmakers on both sides of the aisle have consistently proved reluctant to impose on themselves the same ethical standards that guide the judicial and executive branches. Reform efforts are scant, and only a handful have succeeded.

In response to Watergate, Congress passed rules, in 1978, that required public officials to disclose financial and employment activities of themselves and close family members. The Stock Act of 2012 barred top federal officials, including lawmakers from insider trading, and demanded their financial disclosures be made transparent and accessible. But in 2013, Senate Majority Leader Harry Reid (D-Nev.) introduced a bill—which quickly passed—that rolled back the portions of the bill that made it convenient for members of the public to see the financial disclosures.

But lawmakers have been violating even the weakened Stock Act. As NPR reported last month, the Campaign Legal Center filed ethics complaints stating that seven members of the House, including four Democrats, had failed to report stock trades. The findings, NPR reported, are “the latest example of a bipartisan trend that has emerged almost 10 years after Congress overwhelmingly passed a law to provide transparency and show lawmakers aren’t profiting from their jobs: Members of Congress are ignoring the disclosure law.”

“With all reforms that I’ve been able to help push through Congress, it’s always in reaction to Congress being embarrassed by their own scandals,” Public Citizen’s Holman told me. That makes him somewhat hopeful that the Biden budget debacle will make ethics reform a higher priority: “Manchin undermining the global climate in order to gain another $20 million in his own pocket, something like that could help push through new changes.”

That damage is already done. The administration last week released intelligence reports that said climate change will exacerbate risks to national security interests and highlighted global problems that “no country will be spared from.” Next week, Biden will attend COP26, the UN Climate Change Conference in Glasgow, Scotland, where he will arrive with a package of watered-down legislation and possible executive orders that will likely fall far short of the heroic rhetoric with which his term began. Showing up with weak policies, experts predict, will undermine global climate efforts and American credibility at this pivotal summit.

If, as Holman suggests, party humiliation and voter disappointment are catalysts for ethics reform, Warren and Jayapal’s bill will stand a slightly better chance. Then again, they’d have to get Manchin and Sen. Kyrsten Sinema on board with that one, too.