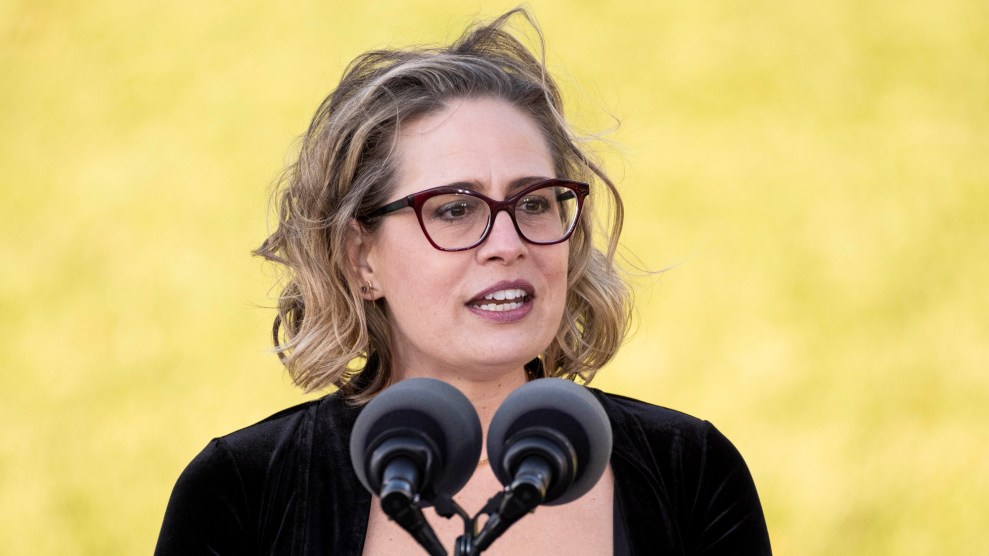 Perhaps the defining characteristic of Kyrsten Sinema’s first nine months in the Senate majority was a persistent, intractable silence. The Arizona Democrat, whose corporate-friendly centrism and dogmatic embrace of bipartisanship has made her one of the most critical and difficult votes in the chamber for President Joe Biden’s agenda, has often been as inaccessible to members of the press as she has been to her constituents. While her political idol John McCain considered accessibility central to the job, Sinema seems to believe it gets in the way of hers—that brokering deals between Democrats and a few Republicans requires keeping your cards as close to the vest as possible and not letting anyone else know what you’re thinking.

But in the last week, Sinema has begun to open up in a series of interviews with local reporters in Arizona and in conversations with Politico (“In a 35-minute interview in her miniature, pink-hued Capitol hideaway office”) and the Washington Post (“in a wide-ranging half-hour interview…in her subterranean Senate hideaway—a pink-walled office”).

So what does Sinema have to say? Unsurprisingly, the senator, at her most outspoken, is still quite guarded, even when discussing the degree to which she’s guarded. (“I don’t even know what ‘enigma’ means, really—no one really does,” she told the Phoenix TV station ABC 15 on Sunday, though her understanding of the term was much clearer when she told the Post, “I’m, like, not at all, actually—I’m very straightforward about what I believe in and why I’m doing what I do.”)

But she did hit a few main points over and over:

Sinema also weighed in on her standoffish relationship with constituents—which has led frustrated progressive activists to confront her on airplanes, outside fundraisers, and even in a bathroom at Arizona State University. As she told ABC 15:

I appreciate when folks are willing to tell me they agree with me or they disagree with me. If they want to protest, if they want to offer thanks, all of that is welcome—that’s how I hear feedback from folks in Arizona. And I’m grateful for that feedback. I’ll also say that I’ll get up every single day and do what I’ve always done, which is just put Arizona first, put my head down, not get distracted by the noise, and just deliver the results. So I guess my message to folks would be keep telling me what you think. I appreciate it.

Perhaps the most interesting thing here isn’t what Sinema has said, but the fact that she’s saying these things at all, after all those months of quiet. Maybe after the passage of a major infrastructure bill Sinema took a central role in negotiating, she decided it was time for a deserved victory lap, and a narrative reset. Or maybe she’s just seen the poll numbers.