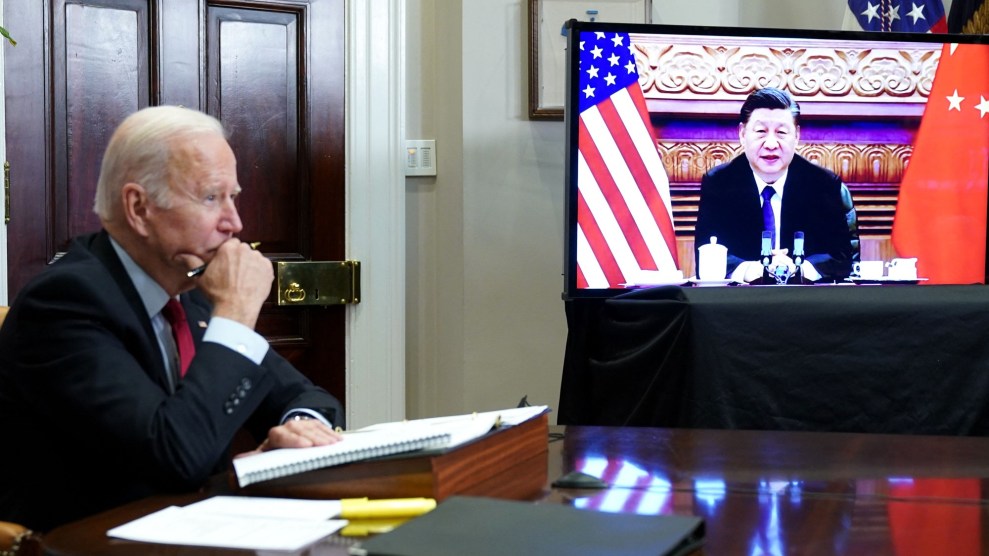 The Biden administration’s decision Monday to skip the Winter Olympics in Beijing, as part of a so-called “diplomatic boycott,” was historic—if a bit anti-climactic. The move had been telegraphed since November, when Biden publicly said that it was under consideration, and the pseudo-boycott will not exclude US athletes from competing, a change from the full US absence during the 1980 Summer Olympics in Moscow. “This is about the bare minimum the US could have done short of nothing,” wrote veteran China analyst Bill Bishop, author of the popular Sinocism newsletter.

Beijing has responded with predictable anger. Its public statements have veered between angrily vowing to install “firm countermeasures” and blithely stating that US politicians weren’t invited anyway. Even though these responses were expected and, by China’s standards, relatively mild, the reaction speaks to how fraught US-China relations have become. For China analysts and human rights activists, it also signals perhaps a greater willingness from Biden’s team to heed congressional pressure to hold the Chinese Communist Party accountable for its repression of the Uyghur ethnic minority in China’s Xinjiang province, crackdown on democracy in Hong Kong, and saber-rattling with Taiwan. Speaker of the House Nancy Pelosi (D-Calif.) had called for a diplomatic boycott, as have Sens. Ted Cruz (R-Texas) and Mitt Romney (R-Utah).

More unusually, the United States demonstrated a willingness to act alone. Only Australia has joined Biden in calling for a diplomatic boycott so far, though the European Parliament in July passed a nonbinding resolution endorsing a boycott, citing China’s brutal treatment of the Uyghur population.

Few people have spent more time calling attention to China’s cultural genocide of Uyghurs—who have endured surveillance, internment in labor camps, and even forced sterilization—than Sophie Richardson, Human Rights Watch’s China director. Following the announcement of the boycott, Richardson called it a “crucial step” on Twitter, but added that the Biden administration should “redouble efforts with like-minded governments” to find justice for survivors of Beijing’s repression.

This week, I spoke to Richardson about Biden’s China policy, the disappearance of tennis player Peng Shuai, and how other nations may react to the US decision. Our conversation has been lightly edited for clarity and length.

What are the diplomatic implications of what the United States did? How exactly do you expect China to respond to a “diplomatic boycott” of the Olympics?

Even before the Biden administration made its announcement, Beijing was already rejecting the decision and characterizing it as flawed and problematic and threatening consequences. That’s pretty standard issue. For their playbook, I think what the administration has tried to do is strike a balance between supporting the athletes who, unfortunately, don’t have any say in where the Games get held and making sure that the US was not going to give Chinese government any political legitimacy by sending diplomats. This is the solution: not lending the event political legitimacy, but still applauding the athletes and not preventing them from participating.

I don’t think this was a decision that anybody was really happy to think or feel like they had to make. I don’t think this was taken lightly. I think it was done with a lot of concern about what the message would be to US athletes. But I also think that the onus ultimately is on the Chinese government for committing appalling human rights violations and, to a lesser extent, for decades of various governments, the UN and other actors, letting them get away with it. It may seem strange that this, perhaps, is the year in which governments start taking much more, not just critical rhetorical positions, but real action, in response to everything from the Chinese government not promptly sharing information about COVID to erasing an entire civic way of life in Hong Kong to arbitrarily detaining people simply on the basis of their ethnic identity.

It is a strange time that a case like Peng Shuai, the tennis player, gets so much international attention. (Peng, a decorated professional tennis player, disappeared last month after accusing a senior Chinese official of sexual assault. Her disappearance—and China’s refusal to convincingly confirm her whereabouts—sparked the hashtag #WhereIsPengShuai.) There are so many Peng Shuais. There have been so many Peng Shuais for so long, many of them world-class performers. One hopes that the US decision, it’s an indication that governments around the world realize they can’t just keep kicking this can down the road.

Obviously the US is interested in in cooperating with China and not maintaining a fully adversarial relationship. What benefit is there for the US to deny China political legitimacy here when on other fronts, we’re also trying to temper the hostility of the relationship?

Look, here we all are on planet Earth. Virtually all governments, on some level, have to deal with one another. The goal here, I think, was to not harm US athletes, but to specifically ground the decision in the Chinese government’s crimes against humanity and other serious rights violations and to put down a marker for subsequent action on those issues. Many governments would love to be able to say to one another, “We’re only going to deal with you on this one issue.” That’s not the reality of contemporary US-China relations. It is a big and complex relationship.

“Many governments would love to be able to say to one another, ‘We’re only going to deal with you on this one issue.’ That’s not the reality of contemporary US-China relations. It is a big and complex relationship.”

But I think the brutality and the disdain for domestic and international law the Chinese government has displayed under Xi Jinping, since the last Olympics, particularly in Xinjiang, has made it harder to find both issues on which the two governments can cooperate or on which the US could have a reasonable hope of reliable cooperation back from Beijing.

We now live in a world in which the Biden administration wants to pursue, for example, greener energy. Solar panels are part of that. But we now know that the manufacturing of solar panels is problematic and tainted by allegations of forced labor and a lack of human rights due diligence. (Much of the world’s polysilicon, a crucial component for solar panels, relies on forced labor in Xinjiang, which led the United States over the summer to ban imports from a manufacturer there.) It’s hard to press ahead with issues like green jobs or managing climate change with the government that’s committing human rights violations on those very issues.

Has the US ever considered doing a “diplomatic boycott’ for previous international sporting events? I know there was talk when Russia had the Olympics in Sochi of some kind of diplomatic action, but of course no boycott ever emerged. Has this been a tactic the United States has used in the past?

The reference point people will recall is the US boycott of 1980 Games. That was a full-on boycott, as in the athletes didn’t go either. That was very much on Biden administration officials’ minds as they grappled with the 2022 Games in that the correct answer was not punishing US athletes, but rather to isolate parties who are responsible for crimes against humanity and other serious human rights violations and inflict some reputational harm.

Other countries have not seemed to rally to the US position. Do you expect any to join the boycott?

“It’s hard to press ahead with issues like green jobs or managing climate change with the government that’s committing human rights violations on those very issues.”

There have been a number of parliaments and individual officials who have taken votes in support of diplomatic boycotts, or said that they are supportive of one. A senior Lithuanian official said last week that he or she was supportive of a diplomatic boycott. I don’t think we have yet seen the Lithuanian government’s definitively assert that is its position. (Lithuania’s education, science, and sport minister, Jurgita Šiugždinienė, has said she will not attend the Games, following a diplomatic break between the two countries over Lithuania’s outreach to Taiwan.) But at least a half dozen parliaments have passed resolutions calling for diplomatic boycotts. I will not be surprised if now a number of other governments follow suit.

You wrote recently about Biden’s virtual summit with Xi, the Chinese leader. You were critical of Biden.

You wrote that “it’s not clear that the Biden administration has specific human rights goals, let alone a strategy to achieve them.” How would you recommend the White House change its policy? What would put you in a better mood?

In the summer of 2020, the Biden campaign used the word “genocide” to describe what was happening in Xinjiang. I spoke to people on his team at the time and said it’s very interesting that you have used this term and we certainly hope that, if you do, in fact, win the election, you will follow through on your use of it. And one was then sort of pleasantly surprised when Secretary Blinken used the term “genocide and crimes against humanity” at his confirmation hearing.

We kept hearing various senior administration officials use these terms and do things like sign on to joint statements in different United Nations forums condemning the Chinese government’s policies towards Uyghurs. We weren’t seeing a lot of action. For people who are living the nightmare of Xi Jinping’s policies in Xinjiang every day—people, for example, who are Americans who have family members still in the region, the kinds of people that we work with—to hear those terms used, but not acted upon, starts to feel pretty hollow pretty quickly.