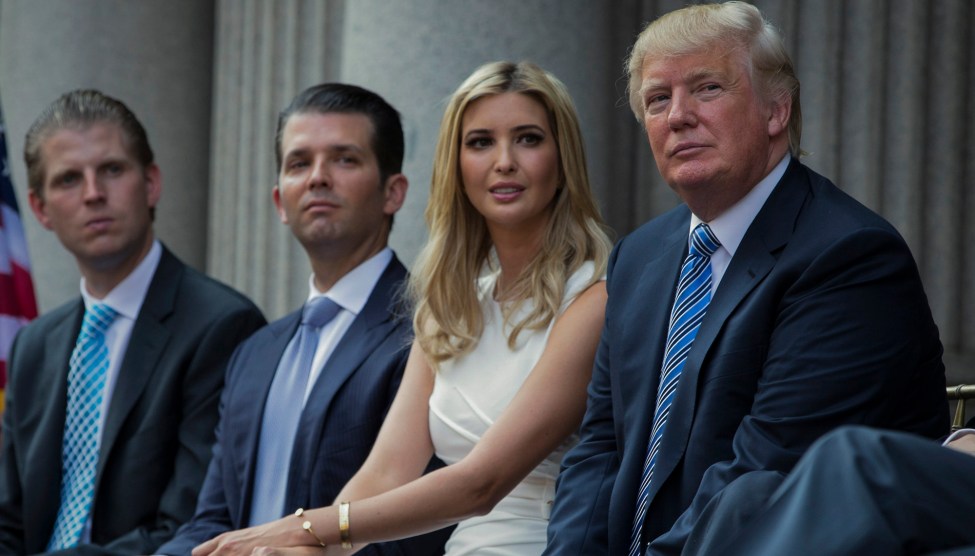 As part of the ongoing negotiations to revive the Iran nuclear deal, diplomats have floated the possibility of removing the Iranian Revolutionary Guard Corps from the United States’ official list of terrorist groups. That would be a controversial step, and the matter is far from settled. But many on the right are enraged by the idea. Last week, one of the most ironic complaints came from Donald Trump’s son.

🚨🚨🚨Biden is so desperate for a deal he’s trying to hand billions of 💰 to Iran and remove the regime’s terrorist arm from the terrorist blacklist. Disgraceful! @SecPompeo, @JohnRatcliffe and @robertcobrien are right, “this is a time to project strength, not weakness." https://t.co/wG7DJkb4KC

In 2018, Trump scuttled the agreement that the Obama administration had negotiated to halt Iran’s nuclear weapons program. The following year, the Trump administration declared that the Revolutionary Guard—a key part of Iran’s military—was a terrorist organization. Now Don Jr. seems furious that the Biden administration might change course.

The irony is that a decade ago, the Trump family—eager to strike a profitable hotel deal—worked closely with a billionaire oligarch who apparently had close ties to the Revolutionary Guard. In 2012, the elder Trump inked a deal in Baku, the capital of the natural-gas rich, but incredibly corrupt, former Soviet republic of Azerbaijan. It was set up to be extremely lucrative for the Trumps—they would get big upfront payments for their involvement, would get a lot of say into the design of the hotel, and then would collect royalties and management fees over time. Trump’s Azeri partners would fund the construction of the building and actually own the project.

His partners were the Mammadovs, a prominent Azeri family headed by the country’s then-transportation minister, Ziya Mammadov, who, despite his modest government salary and background as a Soviet railroad system apparatchik—a Communist Party functionary—was reportedly worth billions. The Trumps worked closely with Mammadov’s playboy son, Anar Mammadov. As I wrote in 2015, there were a lot of red flags that should have been obvious when it came to working with the Mammadovs:

In an article titled “The Corleones of the Caspian,” Foreign Policy reported that the “profit margins” of [Anar] Mammadov’s Garant [corporation] “appear inextricably linked to a number of sweetheart contracts signed with his father’s Transport Ministry.” One of Mammadov’s other companies has received over $1 billion in highway construction contracts, and the firm owns many of Baku’s buses and taxis. Until 2013, Mammadov owned a majority stake in the bank that processed all of the taxi cab fares and the company that provided insurance to all the cabs. According to Foreign Policy, the company that Trump is working with also secured the contract to construct the Baku bus station, which Mammadov’s uncle owns. A leaked diplomatic cable on Azerbaijan’s “most powerful families,” drafted in 2010 by the charge d’affairs at the US embassy in Baku, noted: “With so much of the nation’s oil wealth being poured into road construction, the Mammadovs also control a significant source of rent-seeking.”

The New Yorker documented further details of the Mammadovs’ background at the time Trump did business with them, including the fact that the Mammadovs were known to have a close relationship with an Iranian Revolutionary Guard-linked family called the Darvishis:

At least three Darvishis—the brothers Habil, Kamal, and Keyumars—appear to be associates of the Guard. In Farsi press accounts, Habil, who runs the Tehran Metro Company, is referred to as a sardar, a term for a senior officer in the Revolutionary Guard. A cable sent on March 6, 2009, from the U.S. Embassy in Baku described Kamal as having formerly run “an alleged Revolutionary Guard-controlled business in Iran.” The company, called Nasr, developed and acquired instruments, guidance systems, and specialty metals needed to build ballistic missiles. In 2007, Nasr was sanctioned by the U.S. for its role in Iran’s effort to develop nuclear missiles.

The cable said that Kamal and Keyumars were frequent visitors to Azerbaijan; Kamal had recently established “a close business relationship/friendship” with Ziya Mammadov, and, with Mammadov’s assistance, had been awarded “at least eight major road construction and rehabilitation contracts, including contracts for construction of the Baku-Iranian Astara highway.” (Keyumars also seems to have been involved in these deals.) The cable added, “We assume Mammedov [sic] is a silent partner in these contracts.”

Despite the fact that the Trumps’ management deal with the Mammadovs required that they have significant say in the work being done on the hotel, the Trumps apparently didn’t know or didn’t care that their partners were so closely connected with the group that Donald Trump Jr. was railing against last week. Ivanka Trump posted videos of herself at the time enjoying her visits to Baku, where she was scrutinizing work on the hotel to ensure it was up to Trump standards. And Trump Jr. proudly promoted the project himself:

Check out Trump International Hotel Baku on The New York Times' list of 52 places to go in 2015 http://t.co/z1dTevyeg5

Don Jr., it seems, has conveniently forgotten that his own family’s eagerness for this deal netted his father at least $2.8 million.

Sadly, for the Trumps, the Baku hotel deal fell apart somewhere along the line. In the early months of the elder Trump’s presidential campaign, his company was ramping up promotions of the hotel. But by the time he took office, it had been disappeared from the Trump Organization’s website. It never opened. The Mammadovs’ building was last seen catching fire in 2018.