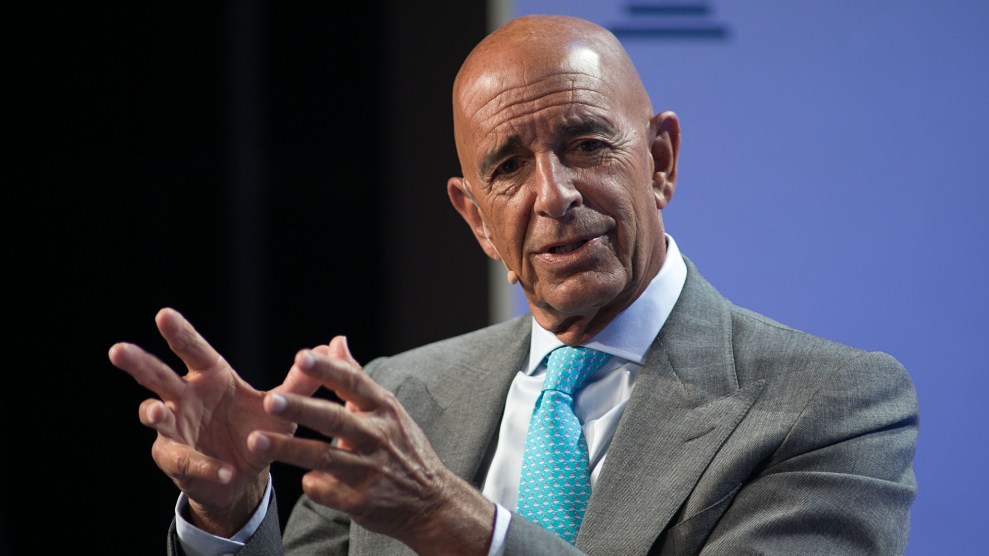 When the Justice Department last year accused Tom Barrack, a friend and adviser of former President Donald Trump, with conspiring to “illegally advance and promote the interests of the United Arab Emirates,” they did not explain why they believed Barrack had secretly lobbied for the UAE. But on Tuesday, in a so-called superseding indictment of Barrack, federal prosecutors added a motive. And it’s no shocker.

The new filing quotes from emails that a former Barrack employee, Matthew Grimes, who is also charged in the case, sent in December 2016 when the fund was set up. Grimes wrote that this “UAE fund” aimed to “achieve outsized financial returns,” but also had a “secondary mandate to garner political credibility for its contributions to the policies of” president-elect Trump. “We will do so by sourcing investing, financing, operationally improving, and harvesting assets in…those industries which will benefit most from a [Trump] Presidency” Grimes wrote.

There is an obvious parallel here to Jared Kushner, Trump’s son-in-law and a key adviser. The New York Times revealed last month that Kushner’s new private equity firm, Affinity Partners, landed a $2 billion investment from a fund controlled by Mohammed bin Salman, or MBS, the de facto ruler of Saudi Arabia, UAE’s close ally. Kushner got this massive investment despite a poor track record investing other people’s money. The Times noted advisers to the Saudi fund had raised red flags about the investment, including “the inexperience of the Affinity Fund management.”

Barrack is charged with nine criminal counts, including failure to register as a foreign agent and obstruction of justice.

But one important piece of experience Kushner did have was his key role in defending MBS in the Trump White House after US intelligence agencies concluded the Crown Prince had personally approved the 2018 murder and dismemberment of journalist Jamal Khashoggi.

As my colleague David Corn wrote, it is “hard to not see the $2 billion investment as either a payoff for past services rendered or a preemptive bribe should Trump manage to regain the White House.”

Prosecutors have alleged that Barrack, who advised the Trump campaign in 2016 and chaired Trump’s inaugural committee, maintained back-channel communications with UAE leaders during the campaign and Trump presidency, and worked to promote the UAE’s agenda in Washington, DC.

Prosecutors have detailed a series of steps Barrack allegedly took to help the Emirates. In 2017, he also unsuccessfully sought appointment to a top job in the Trump administration, including a post as special envoy to the Middle East. In an April 12, 2017, text message to an alleged UAE agent, Barrack wrote that his appointment would “give Abu Dhabi,” the Emirati capital, “more power.” Prosecutors have charged Barrack with nine criminal counts, including violating a law requiring foreign agents to register with the attorney general, and with obstructing justice by lying to federal agents who questioned him about his activities.

Barrack has pleaded not guilty on all charges. He sought to have the case dismissed in a January motion arguing that the government failed to show he’d agreed to work for the UAE. The motion also notes that the prosecutors appeared to have largely completed their investigation by 2019. The two year wait before charging Barrack, his lawyers wrote, suggests that the “government intentionally delayed bringing this case for political reasons or tactical advantage.”